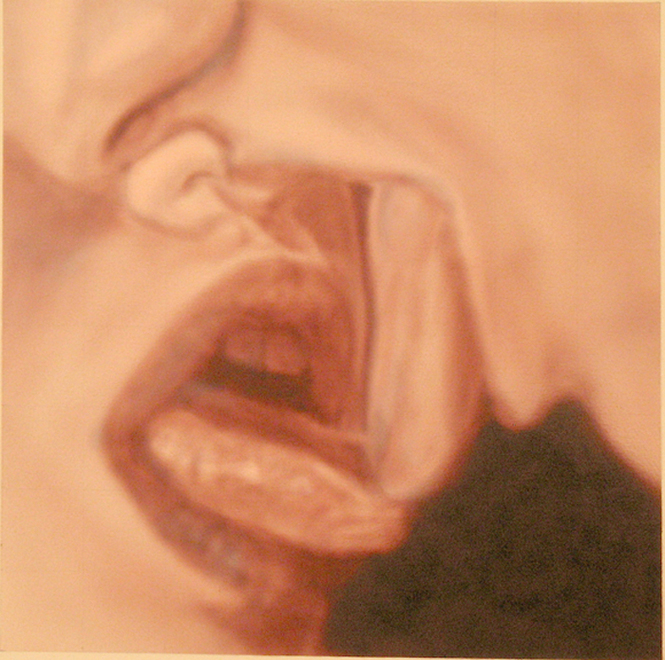 From Censored to Celebrated: An Interview with Betty Tompkins

Tompkins’ large-scale images of furry, shaved and pierced vaginas are portraits of their eras and our shifting sexual trends. But they’re also as timeless as Courbet’s L'Origine du monde. Her work is blunt but appealing. Her straightforward, tactically rendered work appears apolitical, amoral and sensual instead of dogmatic or demanding. She does not shout for rights but claims them while casually demonstrating the illogic of denying them to her. As the art-world’s under-sung Erica Jong, Tompkins boldly but warmly proclaims women’s equal rights to lust and respect. 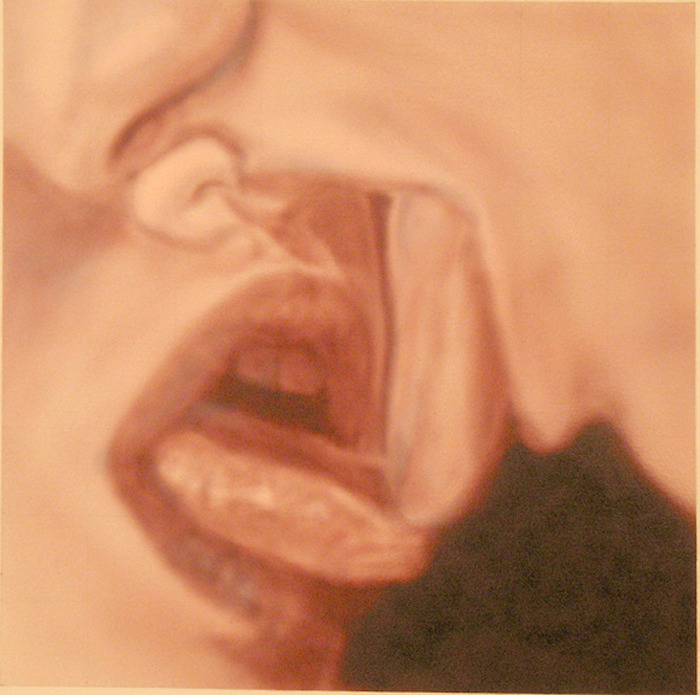 Ana Finel Honigman: Your work is receiving a lot of attention now. Can you explain to me the history of your work and its public reception?

Betty Tompkins: I started the Fuck Paintings in 1969 a few months after finishing graduate school. The source photos belonged to my first husband who was twelve years older than me. He had gotten them from Singapore or Hong Kong many years earlier when he lived in Everett, WA. Unlike our sex saturated culture now, it was illegal to send photos like these through the US mail and it was hard to get and see porn. He got a postal box in Vancouver, BC, waited for what he hoped was the appropriate amount of time, drove up to Vancouver, hid the photos in his car, hoped he looked like an all-American boy and drove back across the border. When we moved to New York so he could attend Teacher's College for his doctoral degree, we lived in student housing which meant we had a two-room apartment. He used the living room as his studio and study place. The bedroom doubled as my studio. It was a small room. I spent time with all the pillows in the bathtub if I didn't want to look at any art. I did one painting as a transition from spray guns to the airbrush. And then I did Fuck Painting #1. Just jumped right in. I had no idea what I was doing. They were very slow to make because I had a full-time teaching job at a private school. I only managed to make two to three of them in the two years I was in that apartment. I did have a few people over to see them. Artists and dealers both. The art world was so much smaller then. I remember one man walked in the room, ran out of the room, and then backed in. An early indication that I was doing something unexpected and startling.

AFH: When did you start showing them?

BT: In 1973 I managed to get work in group shows at Warren Benedek Gallery and LoGuiduce Gallery, both in Soho. Then I was invited into a show/auction in  Paris and my work was not let into the country. My first censorship. It took me a year to get the paintings repatriated. After that, nothing. In  1997 I had a small retrospective at Monmouth University's 800 Gallery. I had one of the Fuck Paintings and one of the Cow/Cunt Paintings stretched up and included them in the show. Bill Arning wrote the essay and helped me pick out the work for the show. It was the first he knew of that whole  group of work. Then a lot more nothing until I had a show of the Fuck Paintings at Mitchell Algus Gallery in 2002. That started something. The paintings were included in the 2003 Lyon Biennale. Bob Nickas paired them with the work of Steve Parrino and from there Camille Morineau presented Fuck Painting #1 to the Acquisition Committee of Centre Pompidou. She was a new curator there and this was her first presentation. She is a bold, courageous person. When she wrote to tell me that the museum was buying the painting, I burst into tears. I couldn't believe that it had worked.

BT: When I first came to NYC, the art world was so much smaller and concentrated. All of the galleries were either on 57th Street or the Upper East Side. It was possible to see everything in two afternoons a month. So I did. I was often in and out of a gallery in under a minute or two. I was often bored by what I was seeing. I was often not engaged. I was looking for risk-taking and was thrilled to find it but often did not. This made me really think about subject matter and abstract elements and if I could get them to work or fight with each other on one surface. That was the genesis of the idea. I did think the subject was riveting enough to engage viewers long enough so that they could see what I was doing as a painter. I have always seen the two – subject/image and abstract elements – as working or not in tandem. And nothing has changed that.

AFH: Can you talk about the sensuality of airbrushing these images? How does working with that medium relate to touch or the absence of physical touch for you?

BT: Oh. I love this question. I think of my airbrushes as my magic wands. I stand here and the painting comes out there. It is a very cool process. I never touch the painting. Totally hands off. And art is, to me, a magic act so the airbrushes are the perfect tools for me to be working with. I use two for the black and white paintings and three for anything with color. There was also a period when I used the hottest approach I could think of. When I came back to the sex subject in 2003, I didn't want to do what I had done. When I was in Lyon for the 2003 Lyon Biennale, I got the idea to get a stamp made that said "LYON" and do some drawings with it. I thought if one of them came out ok, I would give it to Bob Nickas who had curated me into the show as a thank-you. After three drawings, the LYON fell off the wood part so that was the end of that. I liked how the idea was developing though so Bill and I made up a bunch of words and I used them in drawings and in paintings. After a few years though, I got tendonitis in both arms and was, at the same time, having dreams about painting with an airbrush again. I treated myself to two new ones, set them up and started working with them. My hand knew just what to do. A "welcome home" moment. I have come to the conclusion that my best work with paint does not involve paint brushes but some other means to move the paint from the tube or jar onto the canvas. 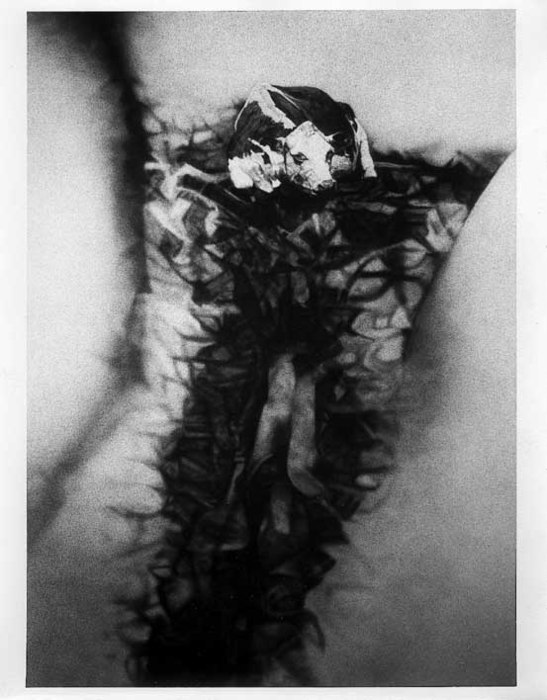 AFH: Please tell me about your "cow cunt" series. Was it a visual play on words? Were you using the word "cow" in the British sense, as a derogatory term for an frumpy, noisy, probably conservative older woman?

BT:  It did not occur to me for some time that there was a pun in there even though now I find them funny. I was very very serious when younger and I was in a miserable marriage so my sense of humor verbally only showed up as self-deprecating sarcasm. My idea had to do with scale reversal. Take something small and delicate and make it big. Take something big and clunky and make it small and delicate. The cunt images all came from what were called "beaver magazines". A photographer friend in Ellensburg WA, took some cow photos for me. I had had a COW stamp made when I had my CENSORED stamp made in 1975 and kept it. In 2003 when I came back to the sex subject, I wanted to make the images with the stamps and the only one I had that would work was the COW stamp. I thought it was the perfect pejorative for a woman. I did three drawings with the COW stamp while waiting for other stamps to arrive.

AFH: Are any of your works self-portraits?

BT: Sorry, Ana. I promised Jerry Saltz more than ten years ago that I would never tell. I suppose it is a natural question for you to ask but I am curious about what difference it would make if it was known that they were.

AFH: Jerry knows best! I confess this question was motivated by my assumptions about the feminist mentality when you were making these early works. I associate the early seventies as an era of self-discovery and "personal is political" statements of identity. I also assume viewers might, respectfully or wolfishly, extrapolate assumptions about you from your images. Is this a question you get asked often?

BT: Thanks. I follow your reasoning here. I used to get asked this question all of the time. Then it stopped. 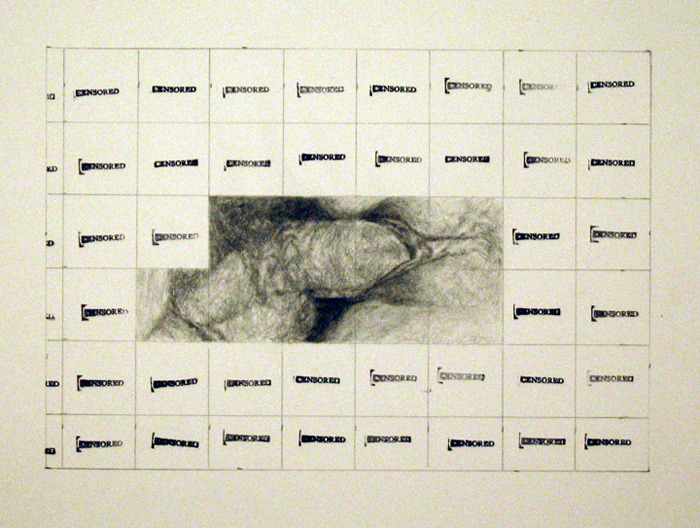 AFH: How do you think your gender has affected your work's reception? Can you tell some stories about peoples' responses to your work based on you being a woman?

BT: This is something I have wondered about since 1969. In the '70's when it became very clear to me that the NYC art world was not interested in young artists and in particular they were not interested in young artists with breasts, I used to beg my then husband to take my slides around as his own. He was the right gender and he was also twelve years older than me so he was the right age. He refused to do it so I will never know. My only experience is as a female. I have no other basis for comparison. My mother had always worked; I was raised to be independent minded (certainly the childhood  excuse of "all my friends are going/doing this" never worked in my family), and I went to an all-girls high school where we were expected to excel. So I arrived at college (coed) without having undergone the typical girls experiences. I was therefore totally unprepared for the chauvinism I was exposed to by the all-male faculty. One professor said he didn't know why he wasted time on me as I was only going to get married and have babies. Another said the only way I would make it in New York was on my back which led to my being so terrified at my first appointment to show slides at a gallery some years later that I threw up. When I was in my 20's, when I could persuade a dealer to come to my studio, the question of whether I was planning to have children ALWAYS came up. At a certain point, a law was passed that made it illegal to ask these kind of questions directly. The issue was still there but they were forced to be more subtle about it. Men were never asked this question. With the exception of those two early group shows, the rejection of my work was so total that I never knew if it was because of the subject matter or because of me. Probably both in every case.

ArtSlant would like to thank Betty Tompkins for her assistance in making this interview possible.

Posted by Ana Finel Honigman on 3/9/14
Tags: women, censorship, pornography, acrylic, airbrush, painting
ArtSlant has shutdown. The website is currently running in a view-only mode to allow archiving of the content.