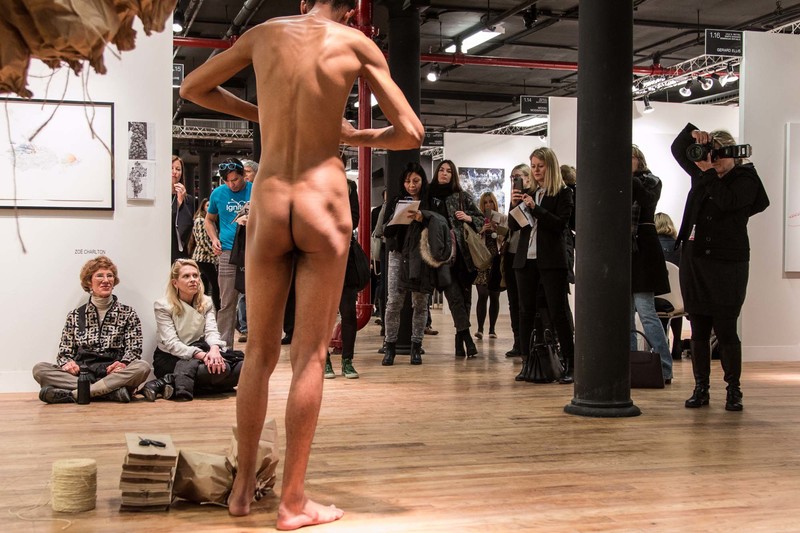 Crowd instincts kick in at art fairs and curiosity can be a big draw. The first thing I saw walking into Volta, known for its one-artist-per-gallery policy, was an arc of bodies at the last booth of the aisle. Wilmer Wilson IV was performing and his audience was rapt. Phones and tablets were out, capturing him as he inflated brown paper bags, tied them off with twine and roped them to his naked body. You could hear the paper pop with his breath and the snip of his scissors when he cut lengths of twine. Wilmer was as focused and steady in his movements as his audience was with their cameras set to record.

“Last year we participated in the Armory and brought a mix of artists,” said Leigh Conner of Connersmith gallery, “but Wilmer’s work has really matured and we wanted to support that. This is an excellent platform.”

The question I always wonder at Volta is how a gallerist chooses the one artist they’re going to show. It takes a certain sensibility to be comfortable with the all-in-one bet. It’s even bolder when the gallery does what M.I.A. gallery did this year and showcases one enormous painting. Soly Cissè’s Untitled (2013) halted my step.

It was the Seattle based gallery’s first time at Volta and they were excited. “We wanted to bring an important piece,” explained Mariane Ibrahim-Lenhardt, the gallery’s director, “It’s such a good opportunity to introduce Soly to new curators, collectors, and critics.” She whipped out her tablet and showed me a portrait Kehinde Wiley had made of Cissè, looking regal.

The importance of fairs for some galleries really can’t be overstated. Gallery director Zavier Ellis was frank, “I’ve met 90% of my collectors at art fairs.” His East London based operation, Charlie Smith Gallery, was showing a line of tough little oil paintings by Sam Jackson. Not two hours after the opening bell and a third were red dotted. He’d bet that Jackson’s work would resonate with a New York audience and it looked like he was going to be proven right. 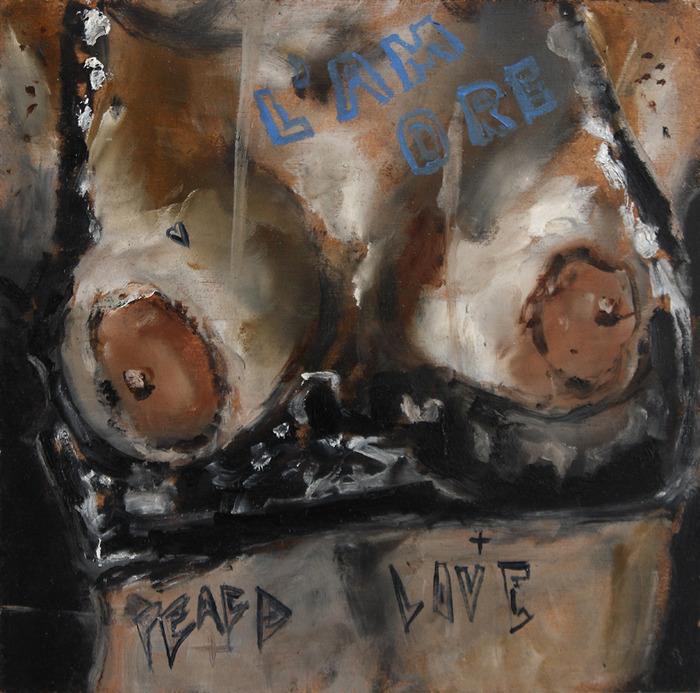 At other fairs I found a mix of confidence and a high regard for clarity and definition to be driving factors in the decision to show one artist when not pressed to by fair policy. At Scope, Galerie Koninklijke Villa opted for six mixed media pieces by Avner Sher, all from a single body of work. “You come into my space, see my artist, get a sense for my program—it’s all related,” the gallery’s director mused, “but it all starts with the work.” Elsewhere, the Moscow based 11.12 Gallery had hung up three austere, wall-covering canvases by Sasha Birulin. To the gallerist’s taste they were the best pieces in the fair, unquestionably, and I knew that if he found sympatico viewers the enthusiasm and camaraderie would be significant. There was no question in mind they represented the somber side of the art yard tick, drawing on Birulin’s childhood in Cold War Russia.

Enthusiasm can be like curiosity in its infectious capacity at art fairs. We pick up on each other’s sparks without meaning to and sometimes the burn is short, but it can linger. After navigating an entry through a cobbled web of 2x4s into Marianne Boesky’s booth at the Armory Show I found gallery director Erica Barrish with a few works by Serge Alain Nitegeka on the walls. It was a debut for the artist and she was particularly pleased that they were able to feature his practice in a way that represented its bases in site specificity and installation. The feat was impressive and neatly conceptual. The 2x4s Nitegeka used were the ones that comprised the shipping crates that encased his work on its journey from South Africa. The same stuff that had protected his artwork in transit was now absorbed into his field of art and was acting like some form of a barrier or force field in the booth. 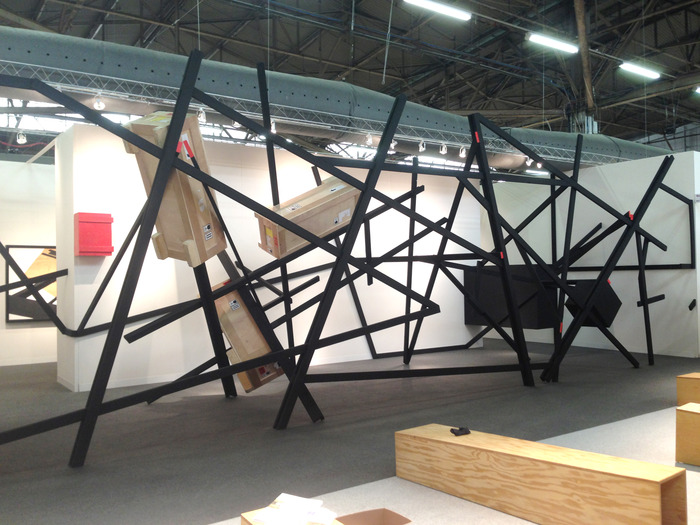 Nitegeka’s installation was visually arresting and it left me with a strong impression. Ms. Barrish’s energetic description of the artist’s practice continued to ring in my mind as I strolled down the Armory aisles, trolling like a fisherman. The degree to which gallerists adore their artists hinges on many factors, not least of which is newness. Nitegeka had just joined the Boesky gallery and that relationship seemed to supercharge the booth vibe.

By contrast the artist Romuald Hazoumè has done a number of projects with the London based October Gallery. “But he is new to New York,” Elizabeth Lalouschek, the gallery director, explained. The work on view, mostly photographic and sculptural, was directly rooted in the DIY manner in which people handled petrol in Hazoumè’s native Republic of Benin. The artist walked me through his works, explaining how they were all related. 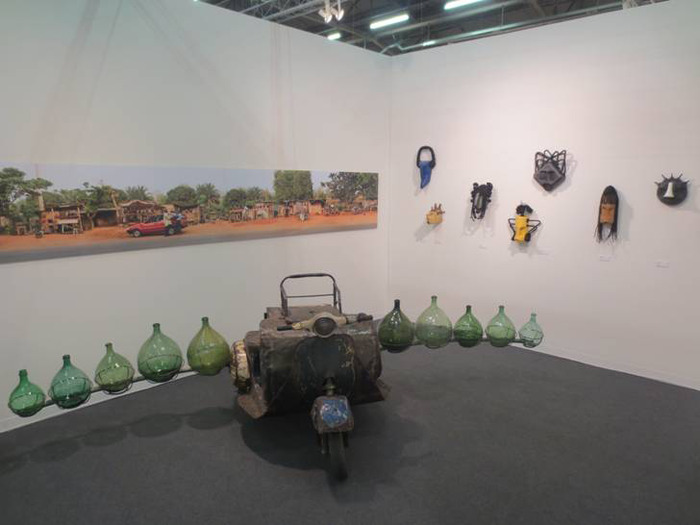 The cultural mores of his country were so foreign to me that nearly every coded nuance was closed off until the artist opened them up. For instance, Hazoumè turns discarded petrol canisters into mask like faces. He pointed out one that looked like its plastic had melted in the sun. It hadn’t. In fact its previous owner had burnt and manipulated the plastic canister such that he’d nearly doubled its capacity to hold fuel.

“Imagine the person who does this with all their canisters,” Hazoumè said gesturing to a photograph of a petrol loading station. “They pile up a scooter with as many petrol canisters as it can hold. The plastic material is just at the edge of rupture. They become petrol bombs.”

Hazoumè’s sculpture, Petrol Cargo (2012), was a direct reference to that dangerous practice, but it also captured a sense of the natural creativity that is born out of practical necessity. The gallery’s artistic director, Elizabeth Lalouschek, reported that there had been a lot of positive feedback. The work was generating energy. It was her gallery’s first time participating in the Armory Show and the interest that was building around Hazoumè’s work was a confirmation that her gallery made a smart choice focusing their booth on one artist.