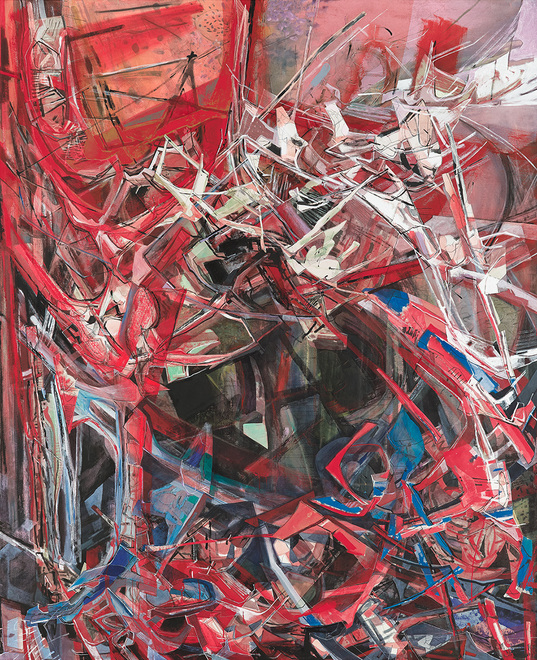 You think I’m describing your lover to you, exactly the night you met, twenty years ago. “But what about...” you begin, and think better of it, allowing me my impressions, limited and one-dimensional compared to yours—you, who sought and found all the ecstatic tickling flutters and sudden despairs of the heart, explored every hill and dale of their form, caught every nuance of manner and nervous tick.

But I’m not writing about your lover. This is about the paintings and sculpture of Iva Gueorguieva, the emotionally rife and viscerally electrifying works with which you, I, or anyone else, may become intimately acquainted in very personal and differing ways. You may see the small patch of blue that makes you want to cry; I, the red flutter of lines that burns magnetic like solar flares; someone else, the dark, dark lagoon harboring a gravitational pull like the center of the galaxy. Her marks and shapes feels more like moments in time – a millisecond in the midst of furious activity – than like areas of space filled with paint. If you really get to know Women and the Ocean (2013) or Suitor (2013), as you would a partner, you’ll find that these paintings have lives of their own. 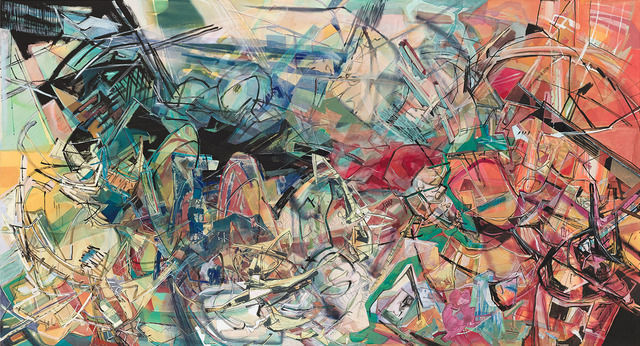 During her adolescence in Bulgaria in the late 1970s and ‘80s, Iva’s father worked as a flight engineer for Balkan Bulgarian Airlines. He traveled extensively, collected art, and shot super 8 films of his trips to places like Vietnam and Cambodia. “Most Bulgarians bought furniture and gold,” Iva told me on a visit to her Los Angeles studio, “while my dad was buying art and cameras.” When he returned, the family huddled up in a dark room of the house to watch the films, just the sound of the projector and the black-and-white images of his escapades flickering by.

Maybe it was this aural experience, the click and crunch of the projector, that viscerally informed Iva on the mechanics of motion pictures and their mysterious ability to seamlessly combine thousands of individual images into one visual experience. Both her mother and father instilled in her a love of still photography as well. Albums of old black-and-white family photos brimmed with a multiplicity of content. She loved the velvet quality of the print. Looking closely, she imagined she saw the image within the paper, behind the surface. This porous quality and her memory of film – all of those images, all on top of each other, the persistence of vision broken down and compressed – are now one part of how she relates with her painting and sculpture.

Additionally, as it happens with family photo albums, in Iva’s paintings, certain characters show up again and again. They may take their shape in an explosion of lines, a vicious arc, or a swath of color, or a hanging flap of stained canvas, but they are there, within the surface. There is the Deserter, whom she first described to me as one who leans with one leg bent at the knee, back and foot flat against the wall. The Deserter is a “vagrant,” a “human body not engaged.” He is actively refusing to participate in the most admirable and courageous way. In this character Iva sees her husband when she is most in love with him, as well as her great grandfather on her mother’s side who refused to bear arms, was caught, beaten, and deserted again from the Serbian army early in the twentieth century.

A passive presence, the “witness between crashes,” takes the form of a girl with pigtails—somewhat a self-portrait as observer, but perhaps a character that could just as well mirror the viewer of the painting.

The General: the source of the absurd. The insidious nincompoop whose playful dealings cause horrible repercussions. He’s a manifestation of the disconnect between abstraction and reality when it comes to socio-political maneuvers—the General might “push those little cones around on a map” with a croupier-like rake while thousands of deaths and atrocities come to pass.

And there are more, you will see. 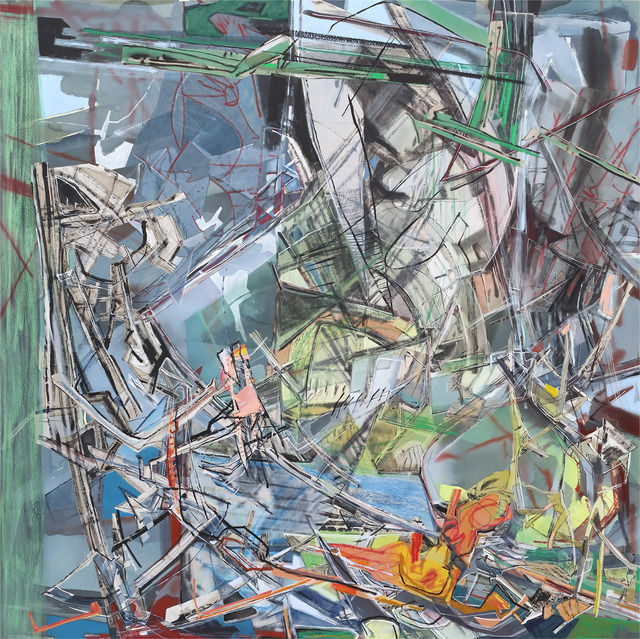 In an interview between Iva and her husband, the artist Matthew McGarvey, she describes a twofold process to her work. She works on multiple projects at once. There is the action of structuring a painting or sculpture – action, mixing paint, working intuitively, with full-body motion – on a large scale. Fatigue will then set in, either in body or mind. “I get fatigued in my willingness to just let go,” she says, “and when I begin to sense that fatigue I pull away from that experience and move to another painting or drawing or something else in the studio that requires more sustained and careful looking.” She steps back and hones in on another project.

This is where her drawing impulse comes in, or where she may really begin to look at what she is working on. As she explains in the interview, real looking happens when she relaxes her eyes, when she relinquishes the mediating elements of seeing: “memories, expectations, and projection.” To really look, she has to abandon the control and binding forces of culture, politics, and personal history. “How do you move beyond what you are as an organism?” she asks. Look with abandon, touch what’s in front of you with your eyes. Don’t see it. Get under the surface.

Iva’s paintings are big enough to fill my field of vision. I look at them, and I feel like I am struggling out of a reverie, remembering the facts of a narrative that has no facts, that is constructed of feelings. There is a warmth of recognition for a timeless moment, a shock of recognition, then that little patch of blue... I find them in slow motion, like a projector at fractional speed, clicking by one frame at a time.

Under the Radar: Super Pop Boy | Leonard Zinovyev | Taco Eisma
1/10/19
COMMENTS (1)
Yeah
Sarah, thanks for the peek into Gueorguieva's history, inspiration and process. She is one of my favorite contemporary painters though I know almost nothing about her. I discovered her work a few years ago randomly in a Los Angeles gallery. Her work makes you dance and laugh and maybe cry. Good, good.
Comment by: Robert Wallace on Tuesday 02/11/14 at 5:16 AM
ArtSlant has shutdown. The website is currently running in a view-only mode to allow archiving of the content.