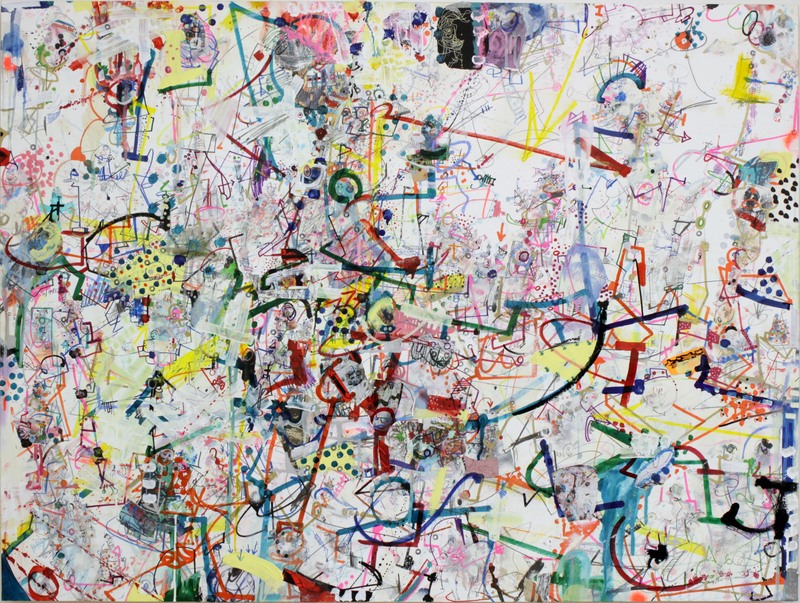 “The paper, the canvas, fabric, whatever media the artist chooses to focus on becomes the energy reader.” — Michael Alan, from The Energy Reader. 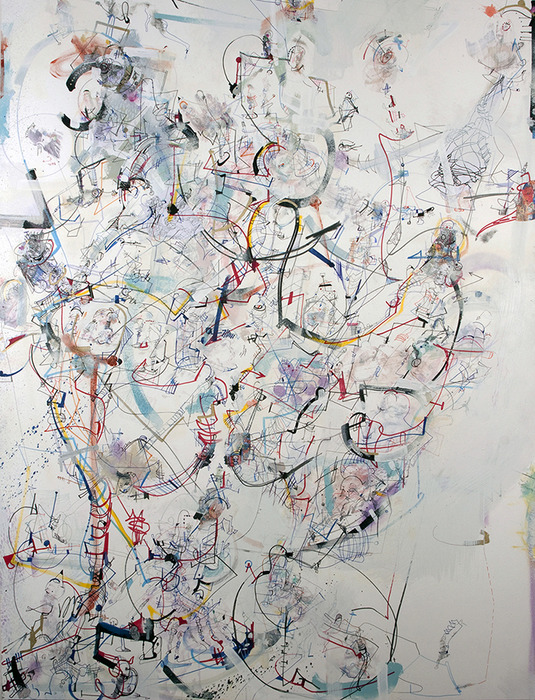 Michael Alan, Punkdance; Courtesy of the artist and the gallery.

Michael Alan’s recent body of work, The Energy Reader, is currently on exhibition at the Gasser Grunert Gallery in Manhattan from Jan 12 - Feb 15, 2014. At their vibrating gyroscopic core, Alan’s drawings and paintings comprise a corpus delicti of brute improvisation, manic details and delicate aesthetics.

Crowd at the exhibition; Courtesy of the artist and the gallery.

In the past, the figure played a more prominent role in his compositions, but over time they receded into a network of lines and shapes, becoming camouflaged by this mist of pigment and scribbles. Michael commented about the change referencing, “Life. Day to day growing. Looking around more clearly and seeing that life is abstract. Not getting fooled by the iconic ideas of man. I still make many figurative works, but I feel the works that are more abstract really touch on the essential nature of humanity. This life we live.” 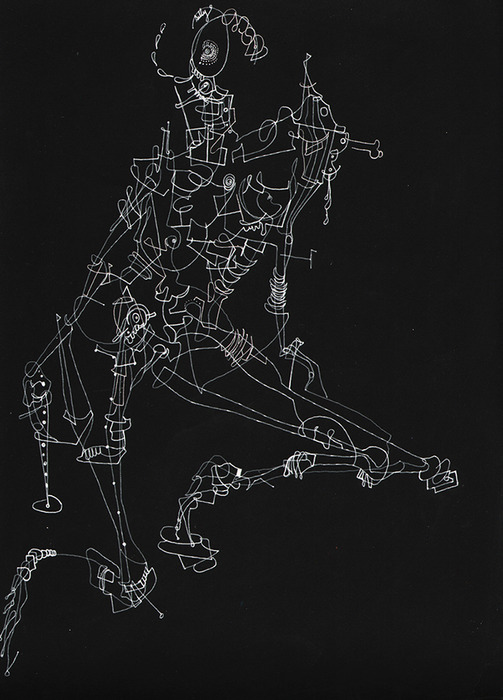 Michael Alan, Silly; Courtesy of the artist and the gallery.

Frequently the paintings begin with a meandering yet precise line, which is then worked on, off and on, on and on, over and over, for months. The results are like the sidewalks of New York City, which has been his hometown for thirty-six years. He has lived on Staten Island in two family homes, but has been all city since adolescence with a strong personality, powerful physicality, and extremely social nature. Unlike an artist in an ivory tower seeking isolation in search of an idealized truth, Alan seems to crave constant interaction with his environment and community to feed and fuel his art. Pigmented vibrations are constantly flowing from his ink-stained hands, whether sitting quietly with a close friend at their crib all night till dawn; at the dinner table with his family slinging around in-jokes and nicknames; or at a party surrounded by strangers who buzz and hum while he lies on the floor and scratches and smooshes art tools against paper, still talking, still present to them. Sometimes, the people around him become the direct subjects of his art, twisted portraits in a traditional sense because he has the eye-to-hand coordination of a master draftsman like de Kooning, but more often than not, he registers the ripples of their auras as echoes, the canvas a radar that is translating their resonance for the rest of us to experience as Alan does. 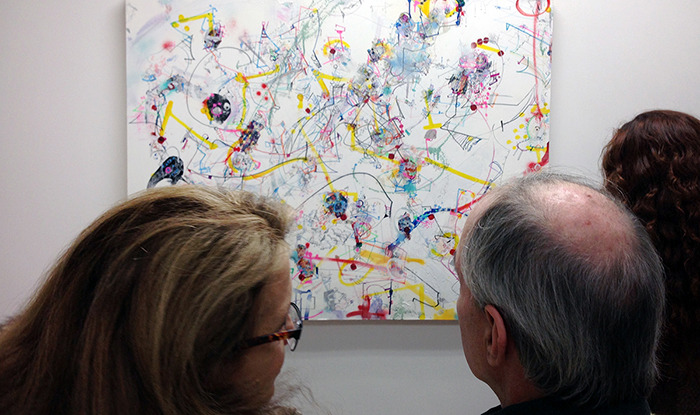 Michael Alan; Courtesy of the artist and the gallery

In Alan’s own words concerning the creation, development and completion of his paintings, he states: “I start and finish in many ways. I have multiple ways that I work. I make line drawings, sculptures, watercolor and ink, musical compositions, collage/drawing/paintings and performance. I usually start with my line, that line can lead to a finished piece, or that can expand and be painted into, collaged into, worked on top of, taped onto a person or made into a song...the levels are endless. Never set a self imposed barrier. I have seen the greatest painters fail, backing themselves into a corner. My home has become an art assembly line where I sleep and shit paintings. As far as knowing when things are finished, when they are done they are signed framed and ready to show, when not they stay with me and travel along until they are completed. They literally accompany me wherever I go.” 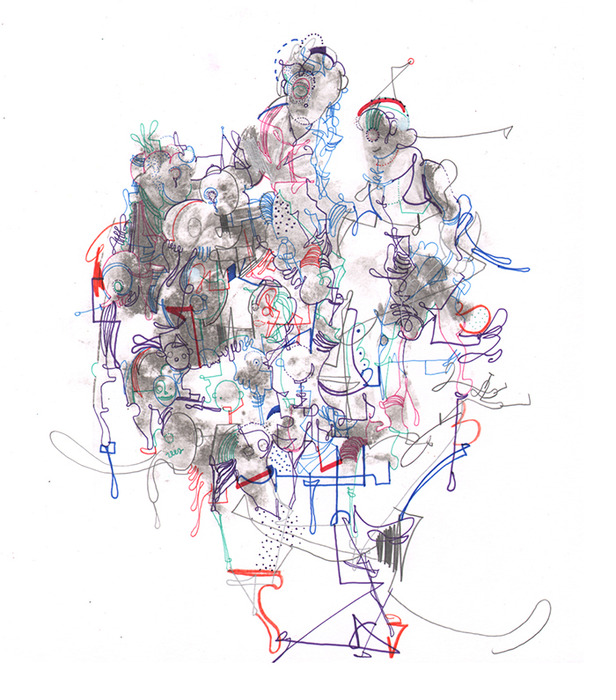 Michael Alan, Typical Surviving Art Family; Courtesy of the artist and the gallery

Over time the pieces become compressed and entwined expressions, compacted with the detritus of the activities and motions of his daily life, congealing into layers of cob-webbed lines, blurts of paint, splashes of water-colors, lines of ink, shreds of collage, resembling a new millennium mutant hybrid of Twombly, Hadid, Rammellzee, and Matta. For him personally though, Alan says, “I like mostly the same artists... The German expressionists, Picasso, Tanguy, Vas Deferens, Wu-Tang, Kenny Scharf, Jan Švankmajer, artists that have been through hell and back and can report on it.” 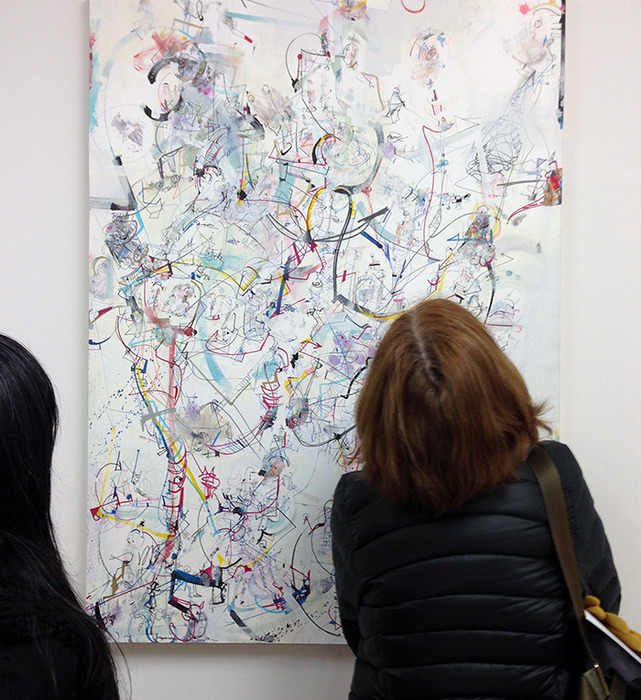 Michael Alan, Look Closer; Courtesy of the artist and the gallery

Traces of the trajectories of his influences, excursions and incursions collect on the surface of his works in the same way that an urban environment develops into well-worn expressions of humanity, paths of their movements and aspirations, the energy of the indomitable American spirit, maps of our psyche, neural connections of freedom and independence. Despite a difficult history growing up and currently life-threatening health issues, Michael always is everywhere, carrying his art supplies in his big fucked up shoulder bag, continuously making art, talking and joking, always creating, the canvases becoming a journal of his day and his nature. Like the streets tell a story of the mass of humanity that scraped across this particular plot of soil, his canvases tell the story of his particular personality and soul moving across their surface as well. 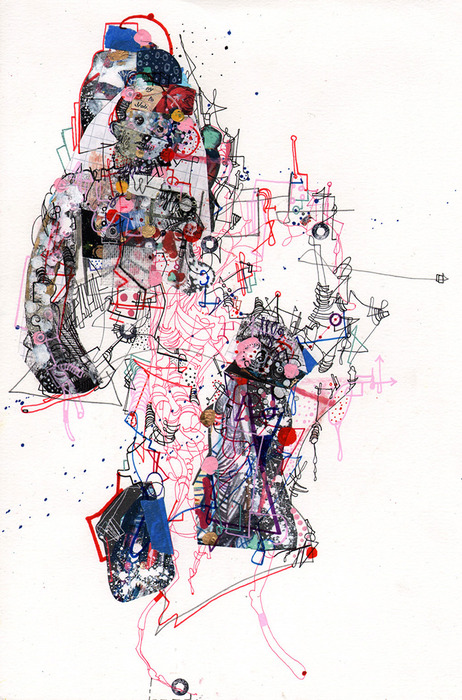 Michael Alan, Slurpie Dog WantsTo Sit; Courtesy of the artist and the gallery

In terms of his use of collage, Alan mentions that: “For the most part I use my own drawings as collage elements. It takes you back and forth into time. This is how I create a visual language. For example a drawing of my mom can be spliced up and reused over 40 times. Then the different incarnations subconsciously help you move from period to period. I like working with and in my own world of images, giving them places to live. The works I cut up just need to be cut up in the same way a wall calls out to be painted.” Elaborating on the idea of creating his own world in relation to the energy reading surfaces mentioned in the beautiful and insightful exhibition statement he wrote, Alan says, “Theory comes after, or at the same time during art making. I am on the outside, especially as theorist. I feel the painter’s job is to find their way, their road, and report back through images and writing. I spend most of my inspirational time with music, art books and videos. The emptiness of current shows, more than anything, inspires me to get deeper in tune with my own vision.” 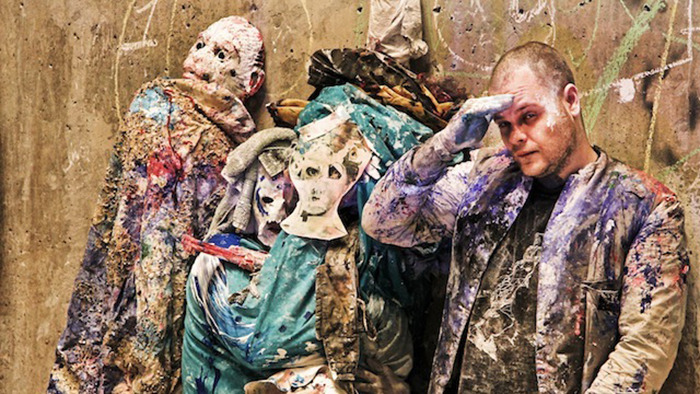 Michael Alan, Performance; Courtesy of the artist and the gallery

Alan is a multifaceted artist, extending this singular visionary voice to the forms of music and performance art as well, revealing the cross-pollinated and consistent aesthetic vocabulary of a refined mid-career artist. As Alien, Alan makes beautifully silly and creepy outsider pop songs, frequently collaborating with other musicians, such as Lee Ranaldo and Odd Nosdam, as well as his parents Raindrop and Woofwoof, more evidence of his tight-knit family background. These disjointed and cacophonous ditties squeak, percolate and bump as if a happy nightmare was scrabbling against the closet door in your childhood bedroom. When asked where his sonic art comes from in relation to his visual art, Alan states, “I make the way I make. I have no idea where it comes from. I used to ask this question, and the best, most positive answer I have is it is my soul purpose. The music is potentially the wildest part of my work and possibly not actually music. I started the music project as a living journaI. I wish there were more recordings of Basquiat, or my other favorite painters. It’s a good way to peer into the artist’s brain.” 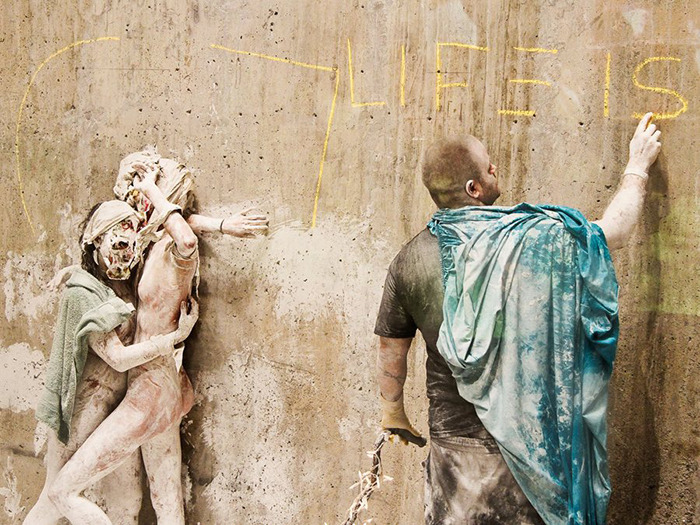 Michael Alan, Life Is Performance; Courtesy of the artist and the gallery

His music and painting are combined seamlessly into his Living Installation performances, becoming a synaesthetic experience of his paintings, a sensurround expression of his music, a writhing hybrid diorama, a panorama of aesthetic forms. These performances have developed from the “draw-a-thons” that Alan conducted years ago, which were more like animated drawing sessions where participants sketched moving performers, into a unique and possibly historically ground-breaking aesthetic discovery, which had not been fully explored to this level in the past. Over a period of two-to-eight hours, Alan acts as an inspirational conductor of sorts at first and the dancing performers as canvas. Over time the performers take over roles as painters, collagists, and conductors in their own rights, turning Alan into canvas as well. Eventually they all become an undulating mutating mass, morphing from bare flesh, loose garments, large collage pieces, frequently functioning as costume as much as canvas, into literally a living painting. Unlike Klein’s performances where he utilized naked women as brushes, Kaprow’s Happenings bringing real life action into the art space, and other kinds of performance art in the past, these living installations are a full on hybrid experience of painting brought into a performance space or gallery in a way that had not fully manifested in the past.

“I wanted to make a place for people to come together. A place that is not a show, or another party, a place to be a part of. This comes from a childish idea of hanging out for the reason of hanging out. This is the art; this is where the ideas come from. The friendships unfold and barriers get broken. Anarchy art. Friendship art. Body freeing art. All of this stems from my lack of enthusiasm for what art has to offer us today, and why the fuck I signed on in the first place.” 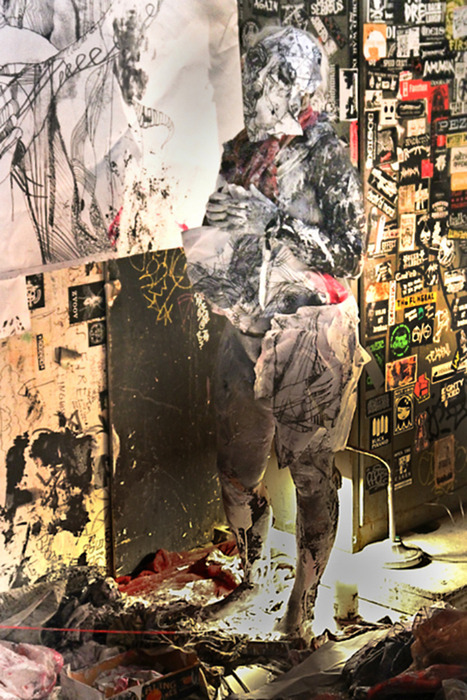 Michael Alan, Performance; Courtesy of the artist and the gallery

Sadly, the frequency of these performances have been cut to a minimum, due to multiple injuries Alan incurred over the past two years during a particularly wild performance and then a car accident. Also, just a month ago, these injuries have been compounded by deep vein thrombosis, which was instigated by the accidents once the blood clots moved from his legs to his chest, and a resulting pulmonary embolism and heart attack. He is now on blood thinners, under close medical scrutiny, and hopefully will be free of any further complications, but nothing is guaranteed at this point. Except that he will continue to demand that surfaces of all sorts read his energy, and that he will share them with us. 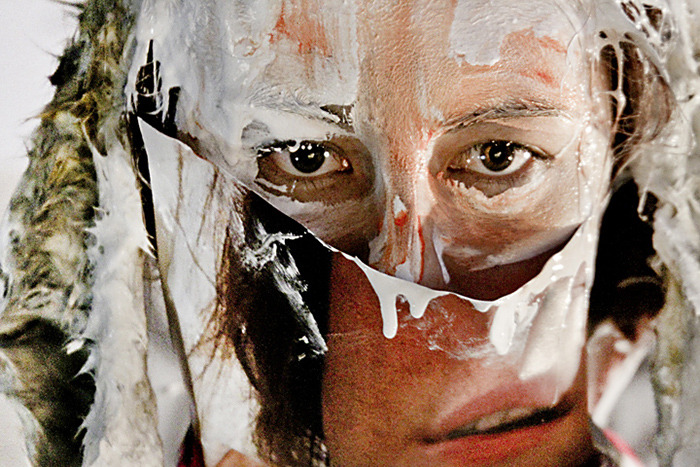 Michael Alan, Performance Close Up; Courtesy of the artist and the gallery

Alan’s personal website has many links to other articles, videos, paintings and music: http://www.michaelalanart.com/art