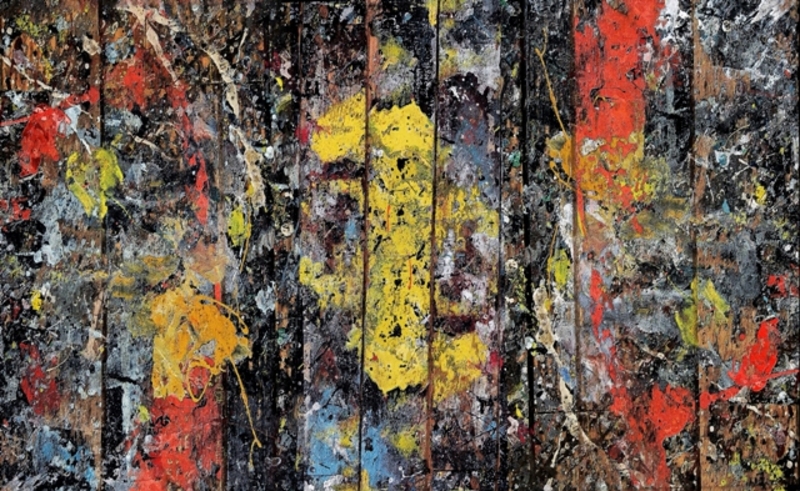 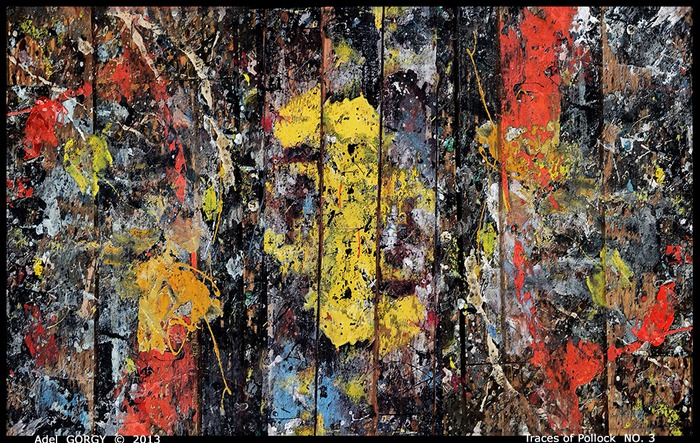 Adel Gorgy, in his current exhibition, Traces of Pollock, de Kooning and Warhol at Able Fine Art NY in Chelsea has brought keen observation, a graceful esthetic and a unique vision and process to an impressive body of work.  In the current age of knockoffs and spinoffs, prequels and sequels, true originality of thought and expression, like Adel Gorgy's,  is rare and worthy of attention.

In a series of photographic abstractions, both monumental in scale, and dense and complex enough to invite intimate, up-close viewing, Gorgy responds to the work of three earlier artists—Pollock, de Kooning and Warhol.  In his photographs we see, as the title implies, traces of their work, but they are recomposed and recontextualized into completely new compositions.

There is a reference to the history of found objects that have informed and, in part, formed the art of the past century in works as historical as those of Duchamp and Picasso and as contemporary as Damien Hirst, Tracey Emin, and Mike Kelley.  But in Gorgy's work, the found objects are brushstrokes and drips, lines, colors, and bits of canvas captured from the work of these earlier abstract painters.

Rather than just presenting what he has found, though, Adel Gorgy completely restructures the elements into compelling, new compositions.  Looping lines and splatters that escaped Jackson Pollock's canvases and landed, instead, on the floor of his studio, have been reclaimed by Gorgy and recomposed into bright, colorful abstract photographic works, such as Traces of Pollock #3, rich with historical reference, and at the same time fresh and beautiful.  De Kooning's brushstrokes have been repurposed and repositioned in Gorgy's Meeting de Kooning Again.  Marilyn…Persona and My Meeting with Warhol offer bits of Warhol through Gorgy's eyes and at the same time offer  entirely different meanings. 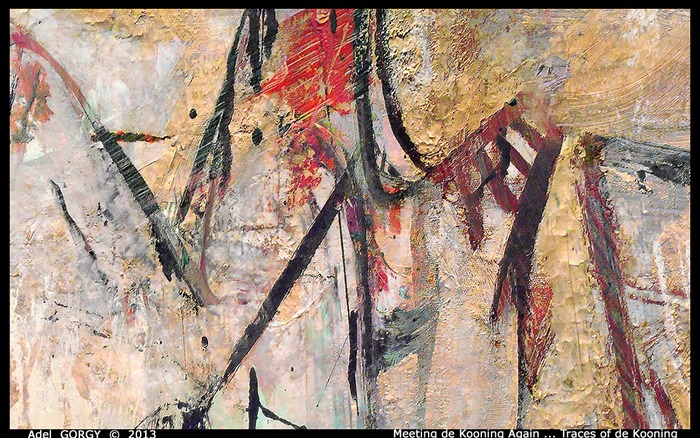 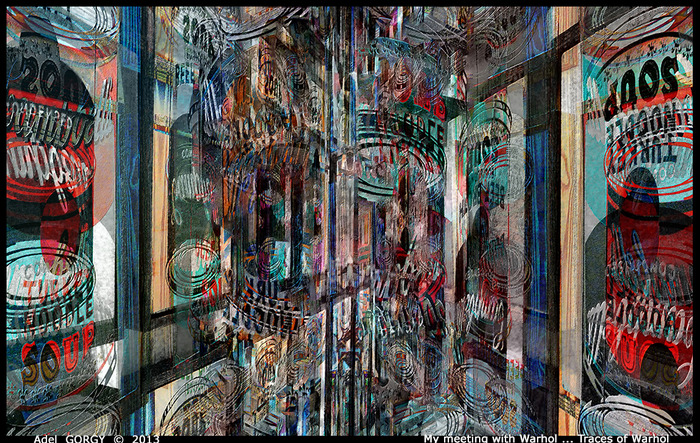 One of the purposes of found art is to offer viewers an opportunity to see the ordinary in a new way.   Adel Gorgy, in these works, invites viewers to see art anew.  It's an idea that has been presented in his work for several years.  Previously, he carried out visual dialogues with painters like Van Gogh, Matisse and Monet, using their palettes and lines to create his own compositions, abstracting realism.  Here, he has chosen to abstract abstraction, and in doing so, has opened new ways of looking at familiar work.  We may all be able to recognize a Pollock at first glance, but do we really look at it anymore?  Through Gorgy's re-presentations, we do.  Warhol, who offered us flattened, commercialized, pop art where labels trumped essences, has been responded to by Gorgy, who gives depth, both visual and conceptual, to both Marilyn Monroe and Campbell's soup cans. In an arresting work, Sum of Any … after Twombly (Untitled), Gorgy pares down a sprawling, amorphous work of Twombly to the concise, enigmatic textual scrawls for which his work is known. 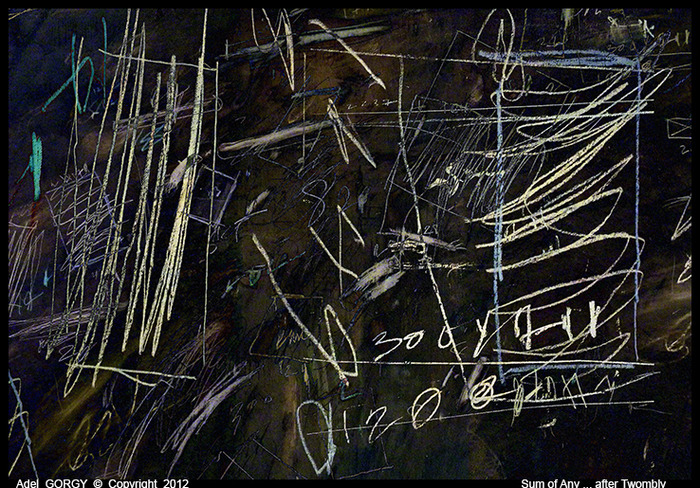 Gorgy states that his goal is to engage viewers with the works of these previous artists, but mostly, to engage them with his own vision.  He encourages them "to abstract [his work] further, and discover the infinite and the limitless."  He adds that "the final reality of an artwork rests with the viewer, and yet for the artist, his vision and his concept are unscathed.  They are different journeys, whose path may or may not cross, but neither is more or less true than the other."

In offering the opportunity to see new work, and at the same time see familiar work with new eyes, Adel Gorgy is creating both visual and experiential art.  He allows the viewer to become the artist, creating new meanings for works by Pollock, de Kooning and Warhol, and at the same time, for his own.

How any artist relates to the art of his own and previous times is crucial.  At the same time, true art is always a mingling of content and intent.  In Traces of Pollock, de Kooning and Warhol, Gorgy's  skill, talent and vision are the cornerstones that support the concept.   Adel Gorgy 's exhibition at Able Fine Art NY presents a thoroughly original idea (hard to do after so many centuries of recorded art) in a visually eloquent and elegant way.

Mary Gregory is an art historian, novelist and arts writer.