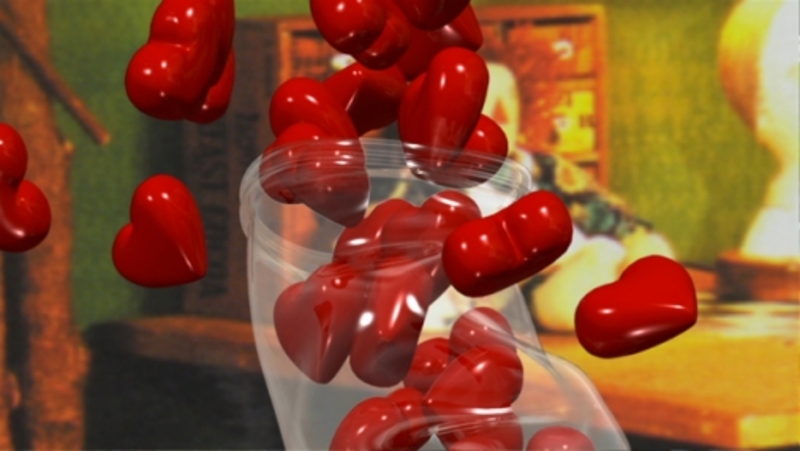 And so it’s over. This year we watched Raspberry Posers in converted parking garages and sex-cult leaders at art fairs, floating heads and racecar book covers speed on by, paperbag haikus and spectral light shining on terrible beauty. All of it we saw like dancing mirages in the strange country of Los Angeles.

To finish up 2013, we decided to pluck some of our favorite words from the gang of writers in Los Angeles this publication has found itself proud to host. We are not sullying the new with memories of the old, but rather repeating a few prayerful words, our favorite words, to take the best of what we’ve done and move with joy towards more.

I could watch Jordan Wolfson’s Raspberry Poser for hours and hours, which is to say far longer than downtown parking affords. Having the large-scale projection all to yourself in the middle of the day, splayed out or dancing on wall-to-wall white carpeting is a pretty sweet, cozy thing….

With every cut, the cartoon-as-irresistible-menace seems to return infinitely and resiliently—sometimes not even as cartoon at all but as painting and drawing or doppelganged in the form of Wolfson’s real live punk boy.

Art Los Angeles Contemporary – the name itself has a certain blankness, being obviously designed to blend into the range of similarly named art fairs that have proliferated with particular intensity since the 90s. Undoubtedly, the same complaints everyone has about these events will hold true here – there's the difficulty of seeing anything in such a saturated environment, the claustrophobia induced by the crowds, the distasteful commercialism….

Out of the latter, perhaps the most buzz has been generated by PARIS, LA's presentation, on January 25th, of excerpts from Jodi Wille's and Maria Demopoulos' documentary on the Source Family, a utopian commune that operated a famous health food restaurant on the Sunset Strip in the 70s….

In art, in life, what is acceptable? One hopes that PARIS, LA's screening will be able to raise exactly this question, casting into relief the cultishness of the enterprise of art fairs along the way. 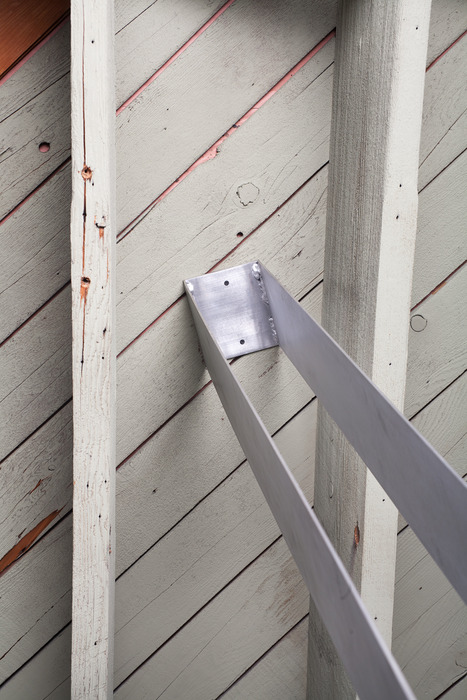 There's hope this might be seen, yet a humbling acceptance of the vast loneliness of space.

It is a gesture.

A last love letter from a sunsetting civilization, a temple left on an abandoned planet, a spare record jettisoned into the cosmos whispering its enigmas through these worn remnants.

An Uncomfortable Presence
LLYN FOULKES at the Hammer Museum

Whether this kind of Woody Allen-esque pathos is one's particular taste is neither here nor there. What interests me in this retrospective is the skepticism it expresses towards the notion of activist art. For Foulkes, changing the world seems a foregone possibility, and painting is only a means to tunnel deeper into the marrow of the difficulty. After years of picking, these works feel less completed than simply sloughed off like an old scab.

I want all of Sam Gilliam's paintings here to be book covers.

Perhaps it's because their flatness and angles handily resemble package design of a certain era. I've always felt similarly about Ellsworth Kelly's bright, cheerful paintings that look like they'd been stolen from the detergent aisle and had their explosively optimistic names removed….

Playing the standards wasn't always a pure, nasty dig. These paintings are still pretty darn good. They have all the energy of a racing stripe and all the pacifying softness of a Prozac ad. They are as American as Jackson Pollock and apple pie and a brand-new Chevy rolling right off the line in the Eisenhower years. They are each and all a basic design, filled with cool unpretentious energy. And though as an authored gesture, they may not cut the mustard as revolutionary, but as a gesture, especially one that led to others, their simplicity is certainly so.

The desert, the edge of the city
KAREN LOFGREN : Blood Sister at Royale Projects

Those who say that Los Angeles has no history would do well to drive east. There, the signs of the past ten or twenty years, at least, are unmistakable. Ever newer developments, stamped with KB Homes' trademark homogeneity, impose a geometry on the landscape that feels immediately familiar, as though one had gone back in time to pass the same part twice. In a sense, one hears, these areas are having something of a second life. Investors of the sort who've been doing well lately are accelerating the conversion, heretofore a dream of certain free-market ideologues, of foreclosed homes to cut-rate rentals for those displaced from the urban centers….

…I understand “Blood Sister” to refer to the way Lofgren mixes the blood of two distinct LA art movements, exposing a wealth of evocative possibilities on the borderlines between language and sculpture.

I've always wanted to make a light that looks like the light you see in your dream.

Art is always stumbling into someone else's dream….

Here Light and Space means a geometric beaming light illuminates a corner; the wall sliced out bends its luminous interior towards us with force; the curved room is a fantasy fallen out of 60s futurism—a clean, bright, trippy heaven where nothing really happens but a shift of color and perhaps an increase in telepathy (see: ganzfeld).

When we look towards art, a few of us are looking for what only light can bring. Illumination.

Do you need electric lights, carved ceilings and walls, and elaborate multimillion dollar observatories to bring us closer to enlightenment?

Remember technology does not make good work. You can still write a poem on a brown paper bag, and haiku is just as profound as the Pyramids. 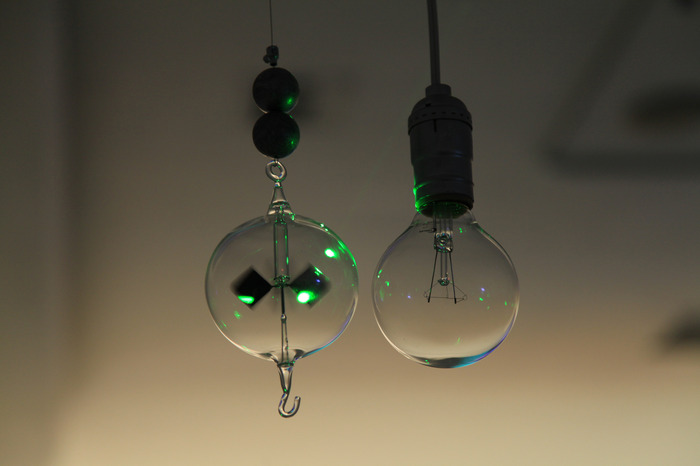 The perfect shudder of spectral light upon a terrible beauty.

Sensual and sensorial, the exhibition makes the intimacy of the darkened gallery a necessary nightscape, a room roomy enough to hold all the phantasms of an expanding consciousness, one that threatens to dissolve but is held just so by the curved ceiling and unbroken walls of the gallery and the shimmering clarity of its curatorial vision.

...why is this little Bess show worth seeing, worth taking in? I like again what Koestenbaum wrote: “For all the power and capital that has coalesced around abstract art in the last sixty years, I don't think that we've given it enough credit as a method for the mind and body to excavate its own temperatures, climaxes, opacities, and valleys.” That Bess looks so fresh, so much like contemporary painting today (willfully eccentric, unable to be fit into any convincing narrative), makes his “watch and see” and his paintings poignant, as though the work to be done is not in the narrative but in the internal mystery of each painter's relationship to their art and themselves.

Eventually all hype and all fame will collapse into the long toll of time and all the whining over the under-recognized and all of the heavy breathing over those that are now proud will come down to simply what continues to hold our interest. If we are careful and keep our eyes open, our Besses and Theks and Melés will continue to come scratching forth from obscurity to rival the argued and studied treasures of their generations, simply through the force of their weird vitality, by their strange resistance to death.

Selfies, like expressions and our selves, are ephemeral things. To be alone, to be seen, to exist out there, on the street, on the web, if only through the fragile colors of a picture, is something worth looking at.

A cyclops quintet, four brutal abstractions and an arch composition of flowers.
La Jennifer, Dianna Molzan at Overduin and Kite

Dianna Molzan's La Jennifer contains all the abject fervor and polite surprise-tinged curiosity of a high school reunion. Is it longing? Is it shock? Is it ardor? An emotion like organized chaos? I asked the paintings, ‘What are we doing here?’ The paintings just shrugged, scrunching the black canvas wrapping a rectangle of stretcher bars (all the paintings maintain their anonymity, each dated 2013 and namelessly Untitled).

Walks Through a Strange Country
John Divola: As Far as I Could Get at Pomona College Museum of Art

And what does Divola’s walking speak of? He finds a strange country. He finds places of extreme poverty, places where people are either barely hanging on or have already left. He finds a culture that allows the pillaging of nature, while at the same time, builds fake movie sets of the very same nature on studio back-lots in Hollywood. He burrows through archives to find little birds and rabbits captured by happenstance on film, in the background of something built for another purpose, and highlights them by re-printing the photos. He sees our destroyed pasts hanging around while the menacing power of our future comes forward with a bullet. And in all of this, he lets art do its thing, lets his knowledge of art history enrich his vision. He throws baking flour in the air in front of a black wall and it registers a type of formalist grit which rivals Christopher Wool.

A Visionary Who Created a World: Celebrating the Life of Noah Davis
9/11/15

This Must Be the Place
6/18/15
COMMENTS (0)
ArtSlant has shutdown. The website is currently running in a view-only mode to allow archiving of the content.