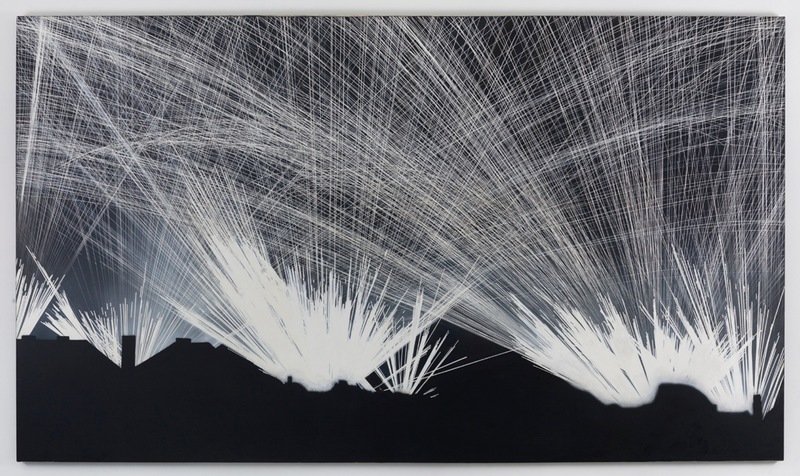 It’s the end of 2013, time for relaxation and reflection. There was a lot of great art to experience in New York this year; here is a selection of some of our favorite shows.  —Charlie Schultz

"Where is Jack Goldstein?” at Venus Over Manhattan

“As technologic fires rain down in the brightly spotlit paintings, and the world appears to end in both the trajectory of a missile and a planetary eclipse, love is lost, remembered, mourned, and renewed in lingering strains. Goldstein's world is not a bright one, and when viewed together these works offer at best a cold sanctuary from a reality lost in images of its own destruction.” Collin Sundt

“It’s a testament to Tonsfeldt’s abilities that, in the recent glut of net art and the New Aesthetic, he’s able to subtly evoke some of the unworldly possibilities of digital imagery—namely, the infinite overlap of graphics editing and modeling software—with nary a pixel in sight.” Matthew Shen Goodman 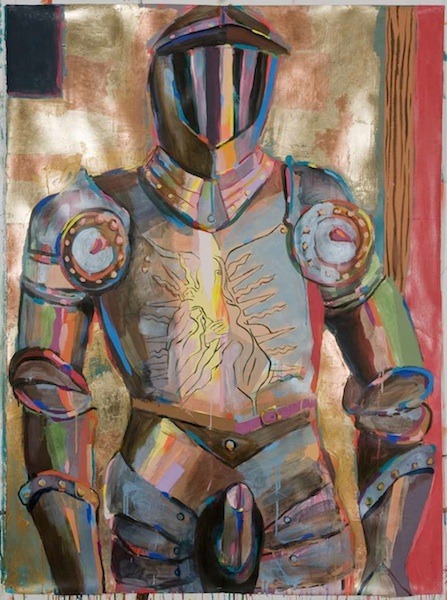 Karen Heagle, Battle Armor with Codpiece, 2012, acrylic, ink, and collage on paper, 55 x 41 inches; Courtesy of the artist and Churner and Churner.

“Heagle treats paper as if it were canvas; her figures and objects rendered life-sized and the application of the various leafing sheets give the work an otherworldly light, such that they call to mind Russian icons or the Northern European devotional triptychs of van Eyck.” Bradley Rubenstein

“Bee has put her painterly skills to the test with her new body of work, exploring pattern and technique inside of the negative space around the characters she paints. The compositions create a duality of narrative and abstraction, linked together with Bee’s bold color palette.” Lori Zimmer 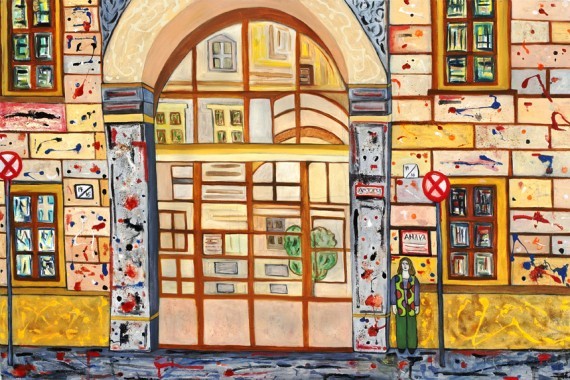 “Fei has been creating work that draws on the relationship between natural materials and calligraphy for more than a decade. Her forms cannot be read. Instead one might consider the individual elements that comprise these works as meditations on the interconnectedness of human beings, the beauty in perfection, or the order in chaos.” Lee Ann Norman

“By constructing pristine pine simulacra of weaponry never realized during its own time, Cherry creates an odd vision of a fantastic destruction of the rote Western canon of art history, carried out by its own imperfect agents. Cherry's historical aggregates serve as an fitting architectural foil to an institution that has greatly altered itself with the changing times.” Collin Sundt

“Weaving together themes of sustainability and balance, buoyancy and weight, Mattingly’s work provokes a reassessment of our relationship with inanimate objects in a rapidly changing world where survival and destruction, waste and renewal, are the twin poles of orientation.” David Willis

“Straddling the line between abstract and representational, Amenoff’s paintings are neat, picturesque, beautiful, pleasant, and reassuring. His images mildly challenge our logic while giveing room to imagine the possibilities without straying too far from the comfort of the real. Amenoff’s focus on the synthesis of feeling that can be elucidated through color, line, and composition makes this work like a jigsaw puzzle fitting together perfectly, just as it should.” Lee Ann Norman

“Thoroddsen’s criticism of patriarchy takes the form of serious clowning around that only thinly scratches the surface. I don’t know if he’s interested in truly challenging convention though. That would be a different kind of art. But we can find value in the work he makes now, with its prickly ambivalence, because of the questions it asks. And questions can be disruptive to convention.” Aldrin Valdez

“Cockrill mixes brilliant touches of Modernism in the form of geometric accents to give these works a tinge of movement that further animates his subjects. You can’t help but feel sorry for the men and women he depicts as they sweep or rake up their dislodged eyeballs, even though they seem more or less calm and composed. Is this a metaphor of our generation as we lose sight of our personal dreams amongst all the static and hype; or is it an indication that our frailties can be our strength?” D. Dominick Lombardi

What Makes the SPRING/BREAK Art Show So Different, So Appealing?
3/4/14
COMMENTS (0)
ArtSlant has shutdown. The website is currently running in a view-only mode to allow archiving of the content.