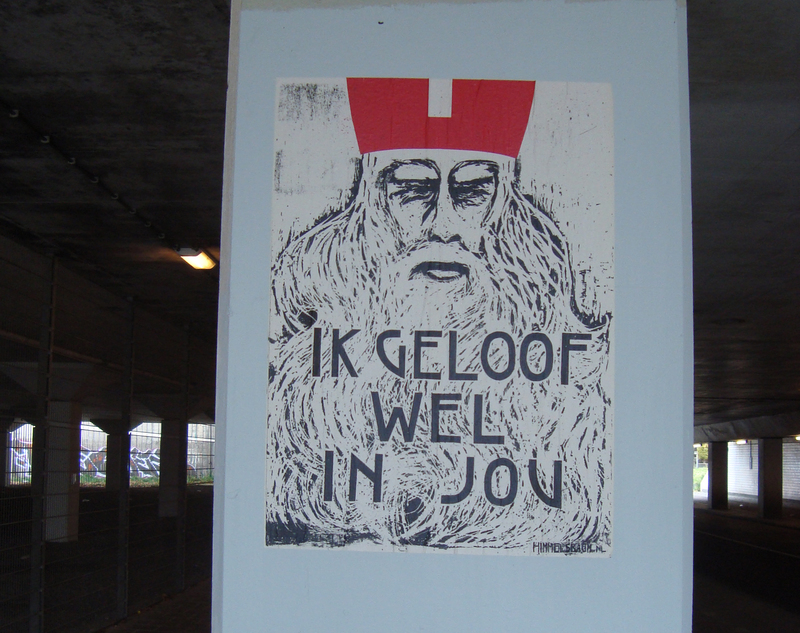 Imagine Santa Claus. How he appears in your mind. A bearded old man with red clothing, arriving around Christmas time, leaving presents for children while they sleep. With some variation, it seems this is the general formula in most countries officially celebrating Christmas: a cultural icon of countries historically connected to Christianity; fashioned in a specific way, greatly beneficial for the purpose of profit, but claimed as tradition.

The Dutch version of Santa Claus is called Sinterklaas, a more controversial figure of Santa Claus, which seems to make the entire tradition a bit more absurd. The controversy is due to the fact that, unlike Santa Claus, Sinterklaas is accompanied by little helpers named Zwarte Pieten, literally translated as ‘Black Petes’. The Zwarte Pieten are little characters with faces painted black, painted-on big red lips, and curly, dark haired wigs. Their role is to help Sinterklaas by handing candy to children. The controversy around this tradition is clear. The blatant comparison of Zwarte Piet to a slave and the connections to the colonial history of The Netherlands are obvious and needless to say embarrassing for any society which would like to imagine itself at the very least as ‘not’ racist, or as the Dutch would have it, ‘tolerant’. 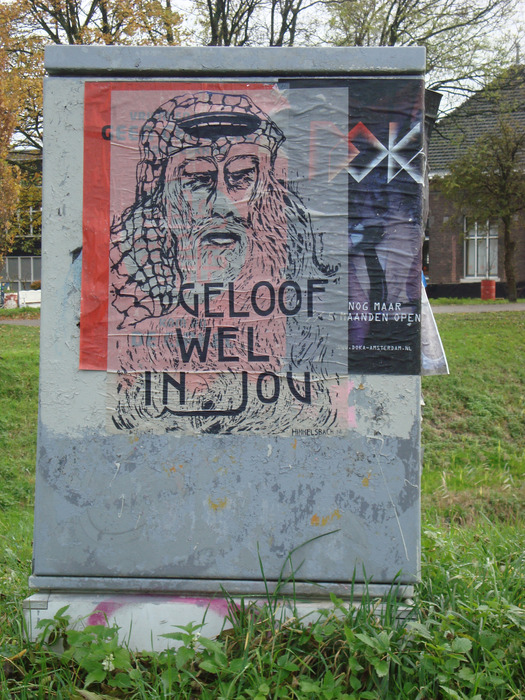 Playing with the iconography of Sinterklaas, the artist Domenique Himmelsbach de Vries spread two posters around Amsterdam and Utrecht, carrying the face and feel of Sinterklaas’s eminence. Both posters show a black and white drawing of Sinterklaas – his face and long beard take up the entire space of the poster, and on the bottom half the saying “Ik geloof wel in jou” [I believe in you] appears.

The two posters are identical with the exception of a changing hat. One of the Sinterklaas figures wears the commonly seen traditional red hat, while the other Sinterklaas wears a kufiya, a common headdress worn by men in the Middle East. These two images bring into play symbols which are currently very highly charged. In Himmelsbach de Vries’s representations, Sinterklaas is no longer a figure which needs to be or is believed in, he is a figure which claims to believe in you, addressing you directly. Similarly to the tradition itself, the usage of ‘belief’ in this case does also carry some religious tones as it implies a kind of divine presence who never loses faith in you. There is an immediacy to this message; it communicates directly to the passerby, connecting a familiar icon with childhood experience in a split second. 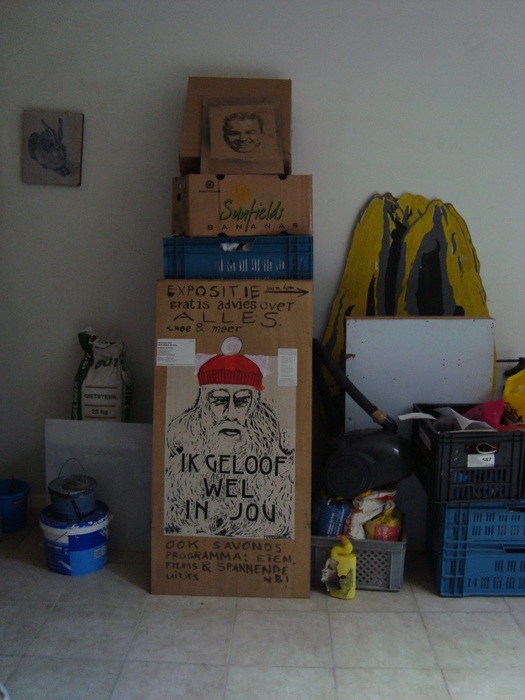 In the second poster, another symbol is added, the Kufiya, also connecting to the particularly charged issue of Muslim communities in the Netherlands and in Europe in general. The image fuses between Sinterklaas and the Kufiya, two elements which can be seen in this combination as flattened out, recognizable symbols, which in this case serve to represent separate communities with differing religious roots sharing the same space of a defined nation. On one hand it is hard not to see this in the fusion of the two symbols, the figure of Sinterklaas with a Kufiya, and yet it is unclear what precisely this might mean. On the other hand, looking at this image separately, the figure of Sinterklaas is not necessarily immediately recognizable. The image can be seen as a Muslim man with a long beard and kufiya, giving a completely different meaning to the saying “I believe in you.”  Like some of Himmelsbach de Vries’s other works, which have included the projection of explicit statements in public spaces, the message in both instances could easily be interpreted as cynical in some way, the idea of belief in ‘you’ turning into either an angry remark or a joke.

Yet I would suggest that this play of symbolism represents quite simply a particular moment, which is also why it is so significant that this work is presented as part of a public space. It is a particular moment in which the Netherlands and Europe are struggling with issues of their own identity and ideology, still dealing with what it might mean to be Postcolonial. The ambiguity of Sinterklaas with a Kufiya as opposed to Sinterklaas with his expected red hat visually demonstrates the issues of national self-perception when confronted with a cultural tradition confusingly seen as both innocent and racist at the same time. 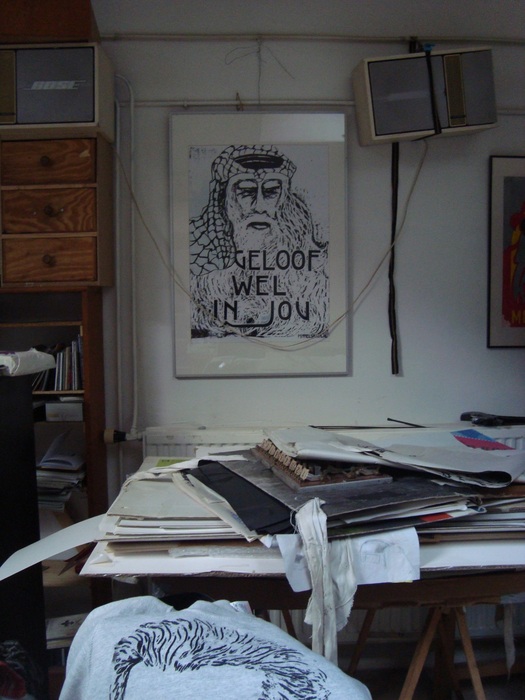 These images reflect back into the lived streets issues which the Netherlands is dealing with at the moment. There is no specific analysis or message, and the statement is not after all cynical, but rather Himmelsbach de Vries’s two versions of Sinterklaas present relevant themes which form a part of the everyday.  These are themes which are embodied by the people who pass by, not in the mythological figures of Sinterklaas and Zwarte Piet, but in the people who experience them as part of their upbringing and surroundings. This is further accentuated by the specific placement of these posters on the streets. With the intermediary barrier of the exhibition space eliminated, the play of symbolism, the many associations these bring up, and the message “I believe in you” represent the embedded nature of cultural values in the environment and their existence and the way they operate in and between people – not simply as external myths told to children or on detached television screens, gallery spaces, and newspapers. This direct projection onto the street is both representative and directly communicative in this way, engaging within the spaces in which cultural values are lived rather than only observed. 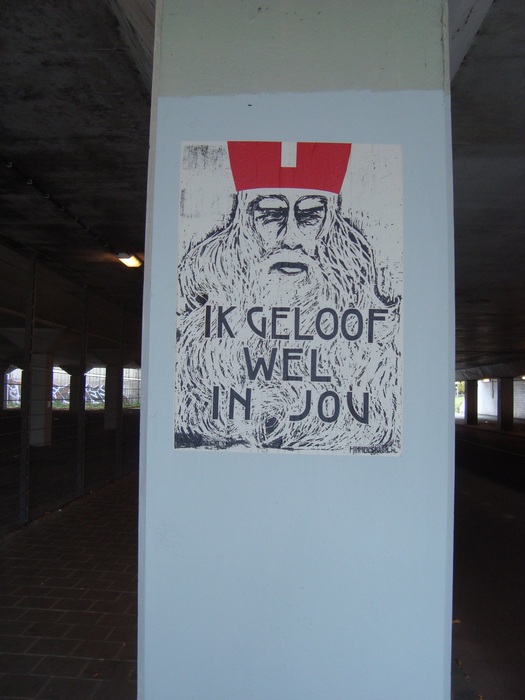 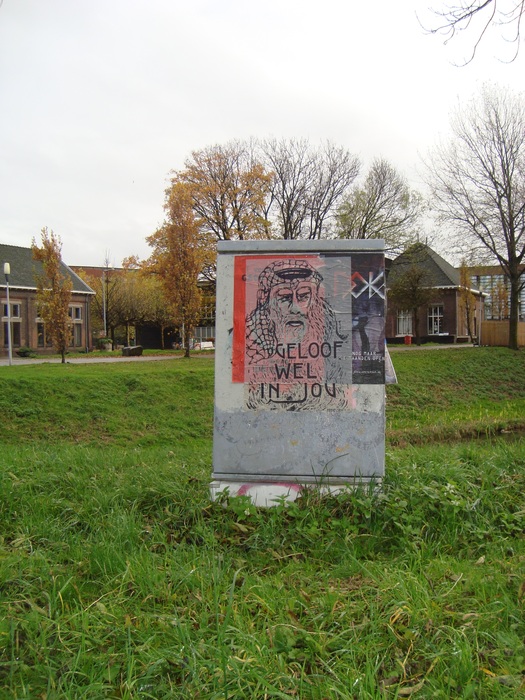