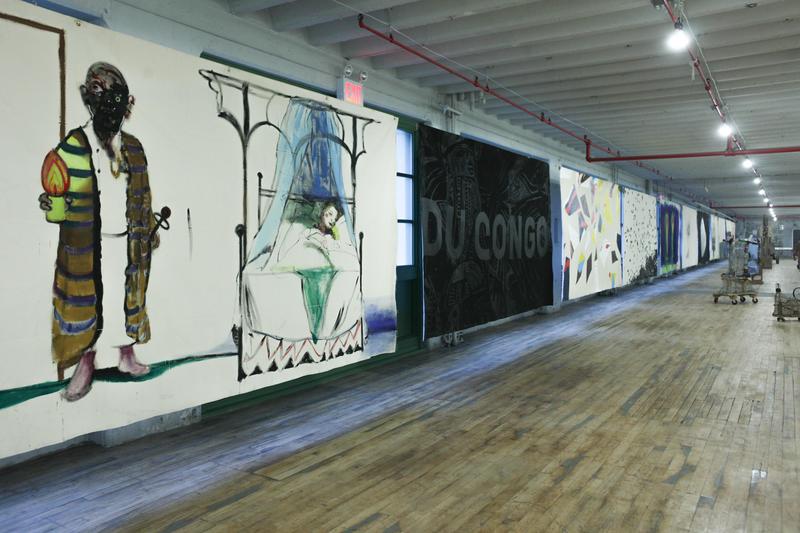 Among the irrevocable losses Hurricane Sandy wrought from New York were works of art: thousands of objects damaged or destroyed in Chelsea galleries, studios in Red Hook and Greenpoint. Phong Bui, artist, curator, and publisher of the Brooklyn Rail, was among those who lost work to the storm. He curated Come Together: Surviving Sandy, Year 1 as a statement of solidarity with a traumatized art community.

Sprawled over 100,000 square feet on four floors in the massive Industry City building in Sunset Park, the exhibition can be thought of as a sort of biennial for New York. Like other recurring exhibitions founded in the wake of tragedy (the Gwangju Biennale and Documenta come to mind), Surviving Sandy uses the exhibition format as a generative act. The works in Surviving Sandy are for sale, a tangible way for the artists to gain from the project; the exhibition doubles as an art fair, without the glitz and trading that comes with one.

New York perennials like Ellen Phelan, Chuck Close, Jonas Mekas, Alex Katz, Richard Serra, and Lynda Benglis have works on view here. But the exhibition also showcases approximately 300 others of all stages in their careers: some given mini-exhibitions in alcoves, others clumped together in frenetic mini-salons. 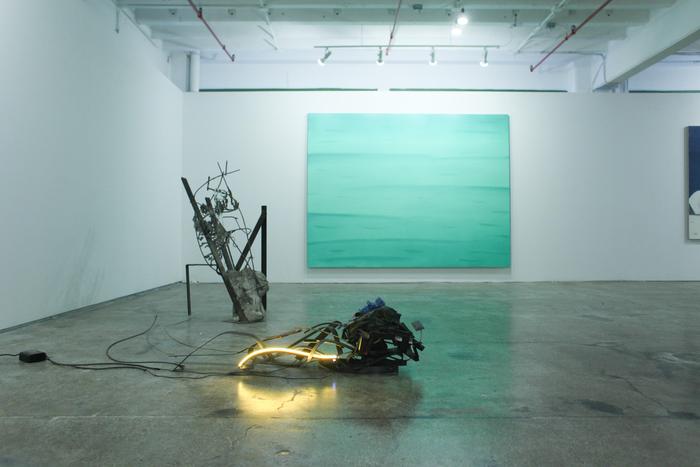 Though works in the exhibition do not all directly address Sandy, water is a theme throughout, as are ruin and chaos. At the entrance to the exhibition is After the Flood, a new work by Dustin Yellin with his signature layered resin sculptures: a Boschian swirl of figures suspended in the aqua casing. The devastation of Hurricane Katrina appears in Francis Cape’s Waterline series, in which the flood mark serves as a formal stamp in each of the photographs. The room they are hung in has wainscotting installed, a visual pun, suggesting both domesticity and the formal quality of the flood.

But as in real life, water in these works is not always a menace. Alex Katz uses his light touch to turn the surface of water into placid, pastel-colored abstractions. Diana Cooper, who lost much of her work to Sandy, created a site-specific work in which she turned the industrial red sprinkler system into a sculpture. Some of the pipes are given faux-extensions, and the red tubing is mimicked in mirrored pieces embedded into a gallery wall. Superflex’s Flooded McDonald’s is a mesmerizing twenty minutes of water slowly seeping into and eventually drowning one of the fast food branches. In another context this might be horrifying; but because we all know the brand, one that will outlast this one branch, the scene is filled instead with humor and melodrama.

And visible throughout the exhibition, just outside the large factory windows, lie the docks and water of the Upper Bay. Water is essential to the history and future of New York, the reason for its existence and a threat to it, the key to the commerce that fuels its art world. E.B. White wrote over sixty years ago of the precariousness of New York, that the city “should have been overwhelmed by the sea that licks at it on every side.” But, improbably, it had not, nor has it been.