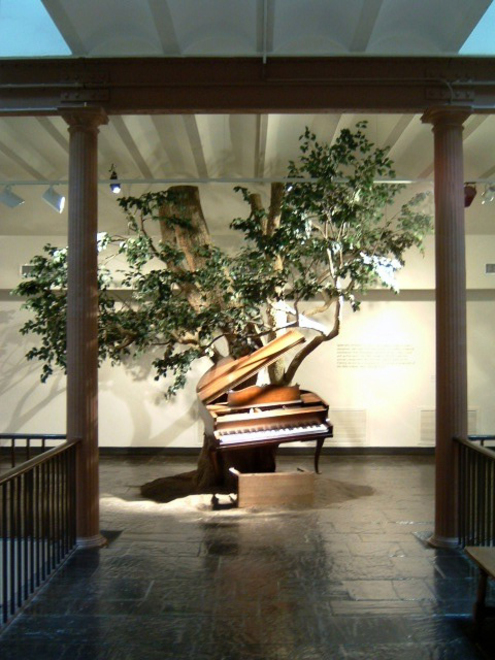 On the edge of the French Quarter is the Louisiana State Museum, housed in the old U.S. Mint, envisioned as the centerpiece of Prospect.1, where the opening ceremony took place. The Mint hosted a smaller number of artists than the Contemporary Arts Center, but was equally formidable, if not more so. The location itself could not be more perfect, facing the picturesque Esplanade Avenue, which leads to the Mississippi River and the historic French Market. This former US Mint is the only to operate under three sovereignties, the Federal Government, the Republic of Louisiana and the Confederate States of America. After the Mint was decommissioned, it served as prison. Vestiges of its former life poke through in various ways. Some subtly, in the upstairs galleries, and some not so subtly.

On either side as you enter the building are two large holding cells, complete with the original bars, first meant to keep you out, from getting the money, then to keep you in, from escaping justice. Here Srdjan Loncar has placed a huge pile of fake money, in the other cell a stack of gold-painted money cases to haul it off with. In an adjacent room is a set up similar to a bank manager’s. CCTV’s allow you to monitor not only the cells with money, but also the room you are in. I found, however, that elsewhere on the first floor the museum’s displays of the history of the mint were much more exciting than this tableau. To examine such a history, through antiquated instruments and machinery, to stand in the old brick hall where the minting took place, provides a much more visceral association with the past and all it’s problematic politics than a grouping of staged artworks.

The main exhibition was on the second floor. The landing served as an ideal site for Sanford Biggers’ Blossom, 2007, a player piano impaled by a growing tree. One could take in the work in the situation of a 173 year-old example of exquisite southern architecture, balconies, railings columns and all. Leading off from Biggers’ piece was the largest installation, a sprawling staging of the Hall of Presidents gone horribly wrong, but aesthetically right by Stephen G. Rhodes, a Los Angeles based artist who grew up in Covington, LA, north of New Orleans on the other side of Lake Pontchartrain. Who Farted ?!!? (interregnum), 2008, stems from the artist’s interest in the original Disneyland in Anaheim, CA, which originally housed not only the audio animatronics Hall of Presidents, but also a recreation of New Orleans’ French Quarter.

The scene before you is a darkened room familiar as both a colonial era capital building as well as a polling place. All havoc has broken loose, voting stations, the kind that come in suitcases are strewn everywhere, some are set up, holding projectors and DVD players. Balloons and confetti litter the floor, the stage where the Presidents should be, is trashed. Painted portraits of historical figures are reduced to luminescent green clouds where James Madison and James Monroe should be. Bizarre but aurally satisfying electronic noises pop and buzz all over. Videos of various period people, red-coats, rebels, soldiers, Yankees and so on burst balloons and tear up pictures of the Presidents. A lot of green screen is used and that glow follows through to the portraits and into the eerie murky feel. The sense is of chaos and disarray, but in a manner that is deeply pleasurable in its spectacle. Onto panels that have been painted and collaged on the back, and smashed through on the front, are projected videos of the actual Hall of Presidents, edited so that a fist or a whiplash makes the robots appear to sit down when struck. Abe Lincoln keeps trying to get up, to address the crowd, but an assailant keeps cracking a whip and shutting him up.

Aside from the carnivalesque atmosphere, what Rhodes has created, along with the exuberant juvenile angst, is the idea of political apparatus without the politics. With the Hall of Presidents Disney gives us Nixon, Bush and Clinton alongside Washington, Adams and Jefferson. All are Presidents, all are good. This piece runs amok in the idea that given enough time, all American Presidents no matter how good or bad will just be reduced to robotics and red white and blue. This is a political art I can get behind, for instead of being hyper-critical of a sitting regime, offering only a counter agenda, here we have an artwork intent on smashing the rosy public school textbook reading of American history as a fun, slightly boring story for kids that seems so prevalent in this nation today. This act becomes more potent given the locale it is presented in.

Exiting this piece, you couldn’t run up against anything more different than a room of tight, humble, faux folk art paintings by Clare E. Rojas. At first I was prone to blow them off, just some hip panel paintings on scrappy wood. But they draw you in with their precise lines, quirky patterning and odd figuration. They all have a unique character about them, in addition to the characters they depict. Maybe these pieces can teach us to appreciate the work of folk and outsider artists as more than pure novelty. Maybe not, but these proved to be an effective gearshift from the Rhodes installation.

Another highlight were the massive yet light hanging metal curtains of El Anatsui. Using aluminum cans and other found materials, Anatsui weaves and assembles hanging works that buckle and pleat like massive chain mail, but also seem to hover off the wall effortlessly. A counterpoint to this work was Shawne Major at the Contemporary Arts Center with her dense clusters made of fabric, thread, plastic and other items. Both artists’ work call into question stances on craft, tapestry, abstraction and what painting, or two-dimensional art oriented with the wall, can be and do.

The arrangement of works flowed well into one another, either to serve as juxtaposition, or to rhyme, as with Beatríz Milhazes and Anne Delaporte. From the decorative, almost gaudy hanging Gamboa, 2008, to the recessive and cool Wallpainting Editorial Blue, 2008, by Delaporte. With Milhazes taking up a palette of pinks, yellows and golds, we pass through an original vault door, its decrepit window sandwiched in glass, into a light blue room illuminated by diffused natural light. Anne Delaporte creates “modern frescos” through the process of wallpapering an entire room with newspapers and then painting them out, in this case with blue. Left behind are images, shapes or text elements. Based on the high number of images from art history, Rothkos, Man Rays and Dada Kopfs, one has to assume she is fairly selective in which newspapers she uses. I am guessing a heavy reliance on the arts section of the New York Times. The abundance of such artwork quotations affects the project of using newspaper as a catalyst for the work, but it still is a practice that piques my interest.

The iteration at the Mint took on new significance as its context changed. In the L9 Art Center, a recovered house in the Lower Ninth Ward run and rehabbed by artists, as a sort of diptych separated by miles and canals was the second half of Delaporte’s installation. The meaning of plastering a room with paper and paint shifted. At the Mint was a solid structure long repurposed from its original and historical use, covered in layers of paint and drywall the operation is covering a boring white wall and making art in somewhat of a white cube. In the Lower Ninth, it was a sense of repair and cover up. The community blighted by poverty and natural disaster has many houses in various states of repair and disrepair. Some fully born anew, others wait to be demolished. Here, the act of Delaporte seemed to at once strengthen and re-enforce the structure at the same time as it sought to cover up the damage, either to heal or to forget. Perhaps a little of both.