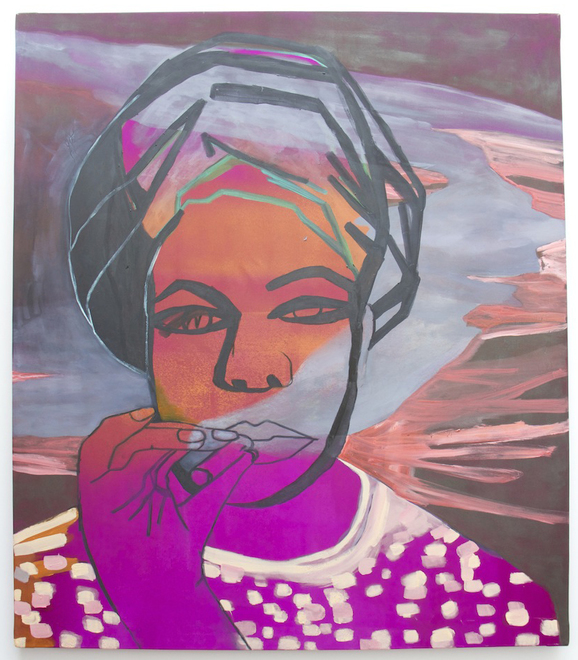 New York, Nov. 2013:  I first met Gina Magid in the summer of 1999, at which point I had not seen her work, so we exchanged studio visits. Her studio then was in a big loft building in Williamsburg, and it was filled with a lot of fabric, wood, and other materials that she was using as grounds, as well as a lot of paintings that she described as all continuously in progress—an attitude toward painting that I shared and appreciated. We talked a lot about books and music, and I was really impressed when, after her visit to my studio she sent me a mixed CD of bands that she had told me about but I didn't know. We began this conversation in 2000 or 2001 and portions of it were published in ArtKrush in early 2001. Like her work, Magid continuously adds on and revises—we followed that lead with this, and continued working on this piece. The following interview is the result of that back and forth conversation over the past decade. 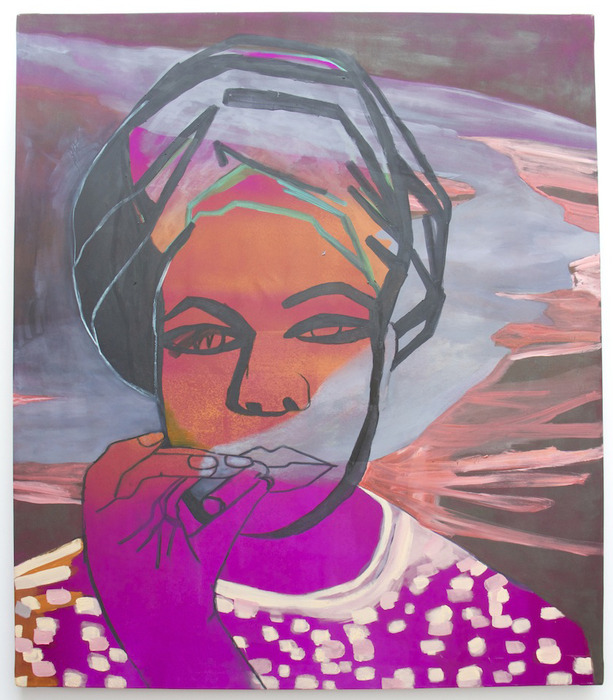 Bradley Rubenstein: Growing up on Long Island and being near New York City with all of its museums and galleries, did that have a big effect on you?

Gina Magid: I didn’t have a ton of access to art when I was a kid. It wasn’t especially encouraged nor valued in my family or in the public schools I attended. It wasn’t until I was a teenager that I began to discover it on my own.

I visited MoMA sometimes. I saw a Francis Bacon retrospective that greatly influenced me. I thought they were morbidly beautiful and violent. I remember them with candy-colored backgrounds. I also read the collection of interviews between Bacon and David Sylvester, which, early on, had a profound impact on the development of my studio practice.

As a teenager I responded to the boldness of German Expressionism and Abstract Expressionists such as Franz Kline and Egon Schiele. Early artistic influences were probably Cy Twombly, Henry Darger, Basquiat, and Schnabel. I also looked a lot at Rita Ackermann, Karen Kilimnik, Richard Prince, Mike Kelley, and Elizabeth Peyton and still do. I guess I'm absorbing and being influenced all of the time by the works that I see and love. It's reassuring to experience other artists that I feel like I can relate to, artistically speaking. Others often reference Sigmar Polke, Picabia, and even David Salle during visits to my studio—I think because my use of layered and psychologically charged imagery has something in common with these artists.

BR: I remember talking with you a while ago, after seeing some of your recent pieces, and remarking that it seemed like you’d never seen a painting before. Your work somehow has a quality that is truly innovative—not innovative in a planned sense but more like really good punk music. It has an “I don’t know what’s gonna happen next” feel for me. I also get that looking at Clyfford Still, for example. Here is this guy who just made it up as he went along. How do you feel about that? I know you are actually a really good printmaker. You know technique.

GM: I do know printmaking technique, but I never formally studied painting. I learned from looking at art as well as from reading what artists have to say and then figuring it out for myself. I'm a process painter, in that I don't usually plan my pieces out ahead of time. I try to be as present as possible when working and to continually respond to the painting as it develops. It's a kind of meditation. 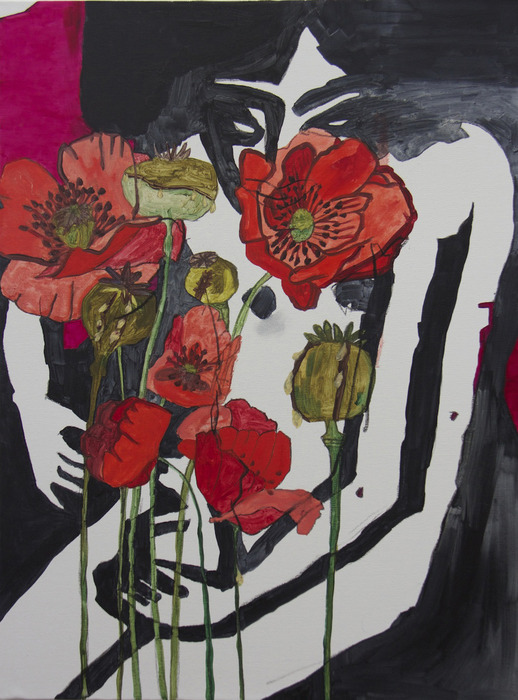 BR: Your paintings are packed with imagery. Some of it is really loaded, I think. Things mutate from one form to another. It seems like you kind of riff off the paint as you work. Can you describe how it all comes together for you?

GM: I draw from a collection of found and created images, art historical references, colors, words, memories, and ideas. Anything, really, that moves me or that I'm thinking about will be collected, brought into the studio, and may find its way into a painting. Sometimes years later it becomes relevant or I find the right place for it within a piece. The images that I use are always meaningful for me; sometimes they work as clues or fragments of language—visual language. I'm finding that I tend to return to the same imagery over and over again. Now, after almost fifteen years of painting, I can see patterns emerging.

It's difficult for me to explain my process in the studio. When it's going well, I feel like an alchemist, working with forces I can only partially control.

BR: Is it an intuitive process for you? Or do you already have some idea in mind of where you’re heading?

GM: It's an intuitive way of working. This is great when it's all gelling but hard to find when it's not. I sometimes wish I had more of a structural framework to rely on. That could also be said of my feelings toward life in general.

BR: Going back to Bacon, one of the things he said about his process that seems to relate to your process: "I hope to be able to have the first instinctive kind of basic thing and then to be able to work, almost directly, as though one were painting a new picture."

GM: Well I'm not sure what exactly he was thinking there, but I can see how it might relate to my philosophy a bit. Right...like I don't want to ever have a formula or understand it completely. Rather, I approach my time with a kind of beginner's mind, in order to discover something new. 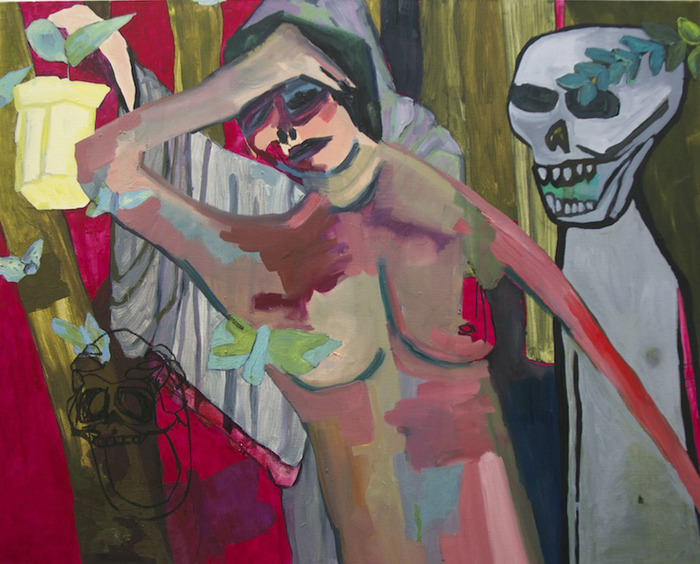 BR: Looking at the paintings in your show this Fall, I couldn’t help but note similarities of subjects or themes that you still work with—but these things had been layered differently. In some, your subjects were kind of "floaty." In others they were piled up more archeologically. Archeology actually seems to be a really great way to approach your work—seeing images piled up over time. Is this how you see what you're doing, or is it just one way of reading the pictures?

GM: Sometimes paintings end up very minimal, and other times they become layered and rich with imagery. There's not much in between. There's a painting in the show called Making the Bunny, which addresses this. In it, the figure is attempting to form an unruly mass into a rabbit, but it's not going very well. For me, this is an allegory of the artist's work. The figure is trying to somehow shape all of this energy into something beautiful that she can love, but it's difficult. Kind of like Dr. Frankenstein trying to bring to life his beautiful monster!

BR: You were working on a painting last Fall that I really liked of a dead skunk. The painting ended up getting a pair of swans, which really changes the tone of the piece, taking it from some kind of existentially dark and creepy place to something just weird. How intentional are these sorts of things? Or is it just that you felt like adding the swans at the expense of the original idea?

GM: The original idea of the painting is still there. I painted the dead skunk from life during a residency in Wyoming at the Ucross Foundation. I began a series of roadkill paintings because I passed them each day as I rode my bike to the studio, and their presence really affected me. Living in New York we are quite cut off from nature, so encountering wildlife—both dead and alive—was a profound visual and emotional experience for me. I watched as those animals on the road deteriorated each day. It was awful. And there were always new ones. I started thinking about how animals have no idea of what is going on as far as cars are concerned, cars being just one element of this artificial world we are creating. We live so out of sync with the rest of the life on this planet.

The pair of swans at the bottom of the canvas I added much later. They were derived from a very different cultural reference, but the painting is still about the skunk. Now the swans can add their own mystery, magic, beauty, and maybe even some love to the piece. I don't like things to be too direct or about just one thing, because that is never how I experience life. It is much more complex and layered.

ArtSlant would like to thank Gina Magid for her assistance in making this interview possible.

Posted by Bradley Rubenstein on 11/10/13
Tags: images
ArtSlant has shutdown. The website is currently running in a view-only mode to allow archiving of the content.