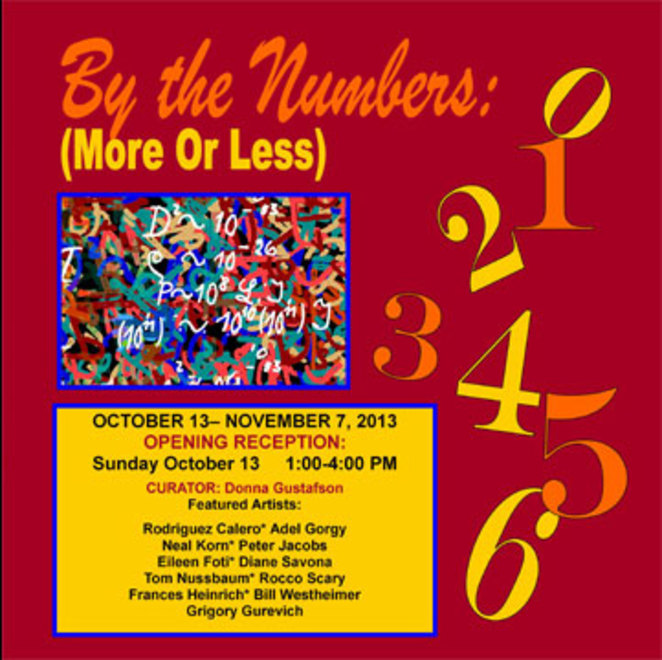 By The Numbers: More or Less - Review by Mary Gregory

By the Numbers:  More or Less, the second of the Triad Exhibitions at the Arts Guild New Jersey, curated by Dr. Donna Gustafson is on view through November 7th.  Dr. Gustafson, who has a distinguished curatorial history, has brought together an intriguing and though provoking group of works from the eleven artists selected to participate.

In her essay, Dr. Gustafson refers to the ubiquity of numbers in our daily lives.  Passwords, keys, phone numbers, accounts and timing can never be far from us, these days.  Nor can the processes of adding, subtracting, multiplying and dividing.  So much of what we do, what we see, what we have, and at times, what we are comes down to numbers.

Eileen Foti's Caution: Hilo is part elegy, part portrait.  In it, she presents images of extinct and near-extinct species, surrounded by yellow and black caution tape fashioned into a nostalgically styled pair of pendants.  Rather than a black and white image of one's forebears, instead, we find a tenderly painted triptych of images of a tree  (a specimen which, when Foti encountered it, was one of a handful left in the world), the feathers of an endangered bird, and, in the center, a map overlaid by a vibrant image of the Sacred Heart, a representation of eternal love.  It is a touching and very personal elegy to a finite group, perhaps no longer present, but unforgotten.

In another triptych, Adel Gorgy approaches numbers in an entirely original way.  The three pieces comprising his group Cosmic Alphabet are derived from a formula written by Einstein.  As with much of his work, Gorgy's inspiration is a beginning, but the expression, creation, vision and meaning are all his own.  In these photographs, abstracted by the artist almost beyond any connection with the original writing, Gorgy presents his own vision of the cosmos.  In the first piece, The Beginning, all is abstracted and formless.  In Cosmic Alphabet…Now, a clarity emerges.  Colors are bright and distinct and the formula can be read.  In the third part, Maybe Later, there is no longer a message or a meaning to be found.  It is pure abstraction.  "It is the universe from chaos to order and from order to entropy," Gorgy states.    It's a seamless and beautiful merging of the conceptual and the visual, an elegant and  bold statement,  and a compelling group of works  by a masterful and accomplished artist. 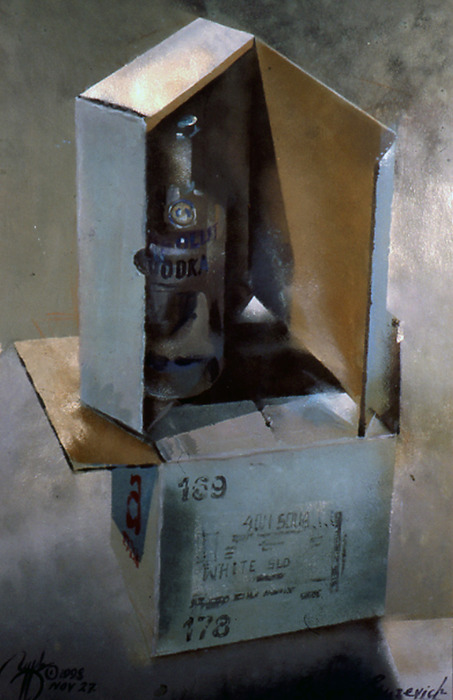 Grigory Gurevich presents a still-life painting done in tones of greys and blacks, Absolut and Boxes.  Boxes stand atop boxes with a bottle inside.  It's both formal, in its focus on classical forms and shapes, and informal, by its depiction of an Absolut bottle and old cardboard boxes.  A master painter, Gurevich used only sponges to paint this image, achieving an incredibly nuanced surface and texture in a meticulously composed work. 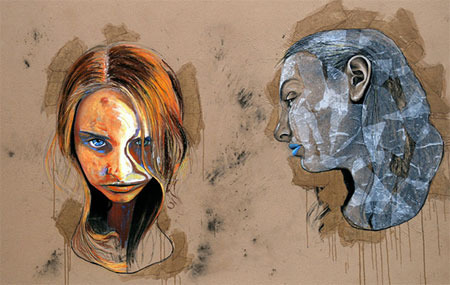 Neal Korn's On Becoming 13 is a tender and touching dual portrait of his daughter.   It's a sensitive portrayal of a sensitive time of life, capturing both the fragility and confidence of a young girl moving forward.  Two visions of the girl are presented, in a frontal pose, one senses a tenuousness.  In a side view, looking back at herself, the same girl seems to embody grace and wisdom.  But this is not only about the subject.  It's a monumental portrait, delivered with confidence.  Bold outlines, delicate shadowing, collaged overlays, and negative space announce the hand, presence and skill of the artist, as well. 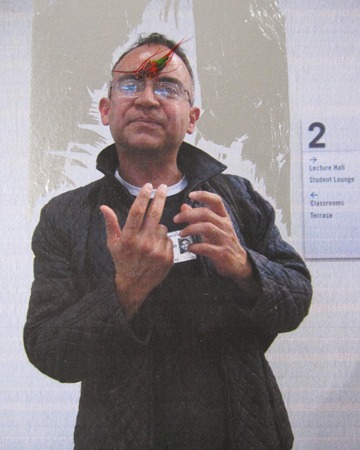 Rodriguez Calero's photographic portraits are complex visually, technically and conceptually.  In her fotacrole (a term the artist coined to describe her process) Rosario, 2013, layers emerge and others are obscured.  In the exhibition, she presents portraits backed by embossed paper, floating on gilded surfaces and varyingly enhanced or obscured by paint.  They are intimately scaled, powerful portraits in the true sense, depicting personalities as much as likenesses. 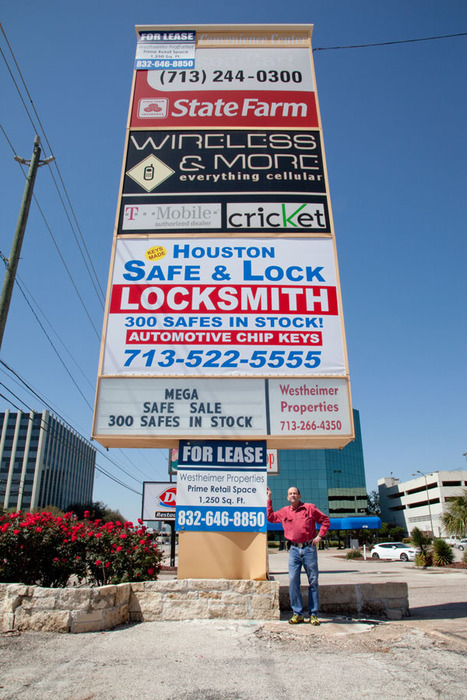 Bill Westheimer's Billiad is a witty self-referential  portrait, done under a mall sign filled with numbers, advertisements and announcements of all kinds.  Only after scanning the entire jumble of messages does the viewer find  Westheimer Properties, and below it, a portrait.  It's one of the more obvious uses of numbers in the exhibition, and one of the more colorful. 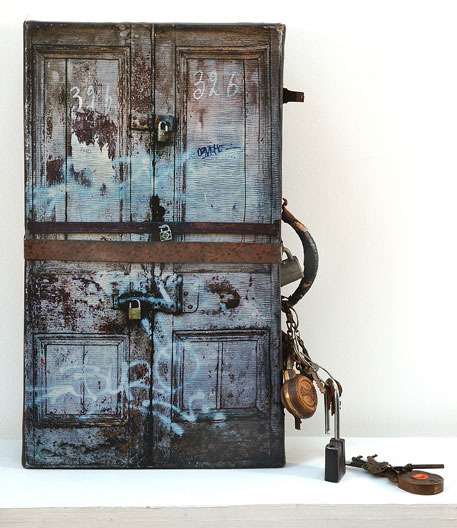 Frances Heinrich's assemblage Security is another piece that carries a humorous message.  An old suitcase, laden with straps, countless locking devices and keys is wrapped with a photograph of a locked door.  So many locks, and so little to protect, she seems to say.  The locked door becomes a portal to what the viewer probably guesses is an empty space.  It's an interesting commentary on security, the false sense of protection we get from locking things in or out, and the way we value what we value.  It's also a visually arresting work of art. 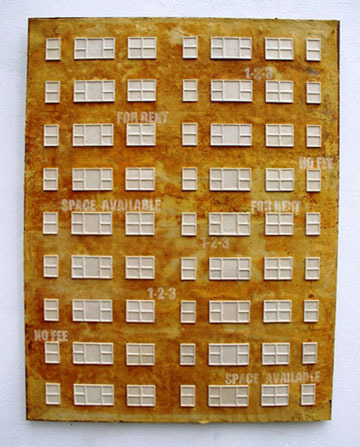 Rocco Scary's Space Available makes us rethink the notion of home, what it evokes, and what it actually means.  For so many urban and suburban dwellers, home is a grid-like monolith.  From the outside, it's an expression of pure purpose.  Function matters.  Form, not so much.   Windows line up in rows, punctuated by numbers to call and units for rent.  Yet, those dwelling in these little boxes know that lives filled with expression and beauty can be found within.  It's an interesting thought brought out by an interesting work of art. 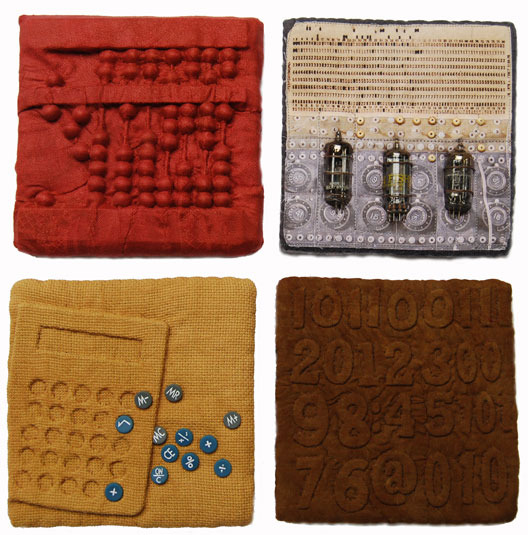 Diane Savona, This Too Shall Pass

Diane Savona's installation This Too Shall Pass is a grid of 35 tiles.  On each is some recreation of a type of number, or numbering or counting system.   An accomplished fiber artist, Savona embeds an abacus, rulers, computer components, calculators, quipu, on a grid (itself a numbering system)of small, three- dimensional works.  It's an encyclopedic view of the idea of numbering and how it has evolved over the ages. 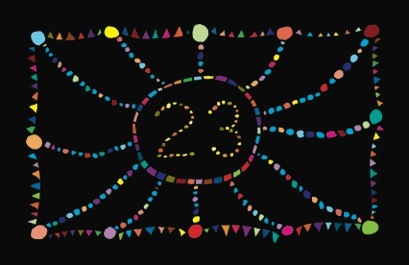 Tom Nussbaum's series of digital prints are portraits of number themselves.  In bright circus colors, decked with pennants and garlands, surrounded by stars and strings of beads or lights, the number 23  is presented as the subject.  Nussbaum's works don't answer the question why, however.  They leave that for the viewer to ponder while studying a cheerful, celebratory picture of a number. 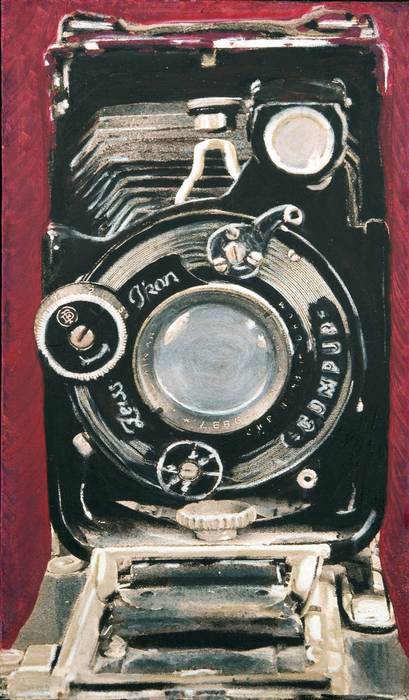 Peter Jacobs' Opa's Camera is a portrait of his grandfather's camera, and through it, a portrait of his grandfather, himself.  It's an evocation of how an object can carry, for those who remember, all the associations of the person who used, owned and loved it.  Jacobs' grandfather used this camera to document important moments and visions, and Jacobs uses it to document the love of a grandson.  It also carries a visual pun, the camera being in the picture, rather than making pictures, for a change.  It's a strong work expressing strong feelings, with a few numbers along for good measure.

By the Numbers:  More or Less is a beautiful show filled with complex, evocative, accomplished works by a talented and diverse group of artists.

Lawrence Cappiello, Director of the Arts Guild, who has designed, curated and exhibited many excellent exhibitions at the Guild, has graciously chosen to step back and let other voices and visions prevail.  It's a fascinating look at the curatorial process and experience.  The Triad offers an almost unprecedented opportunity to see how curators see, select and organize work.  The artists are to be commended for allowing their work this type of scrutiny.  The two curators so far, Dr. Virginia Fabbri Butera and Dr. Donna Gustafson, have been generous to the public in allowing a glimpse into the behind-the-scenes aspects of their work.  The curator of the third exhibition, Jackie Cruz of City Without Walls will certainly add her own fresh take to the subject.

Posted by M Gorgy on 10/16/13
RELATED ARTICLES
COMMENTS (0)
ArtSlant has shutdown. The website is currently running in a view-only mode to allow archiving of the content.