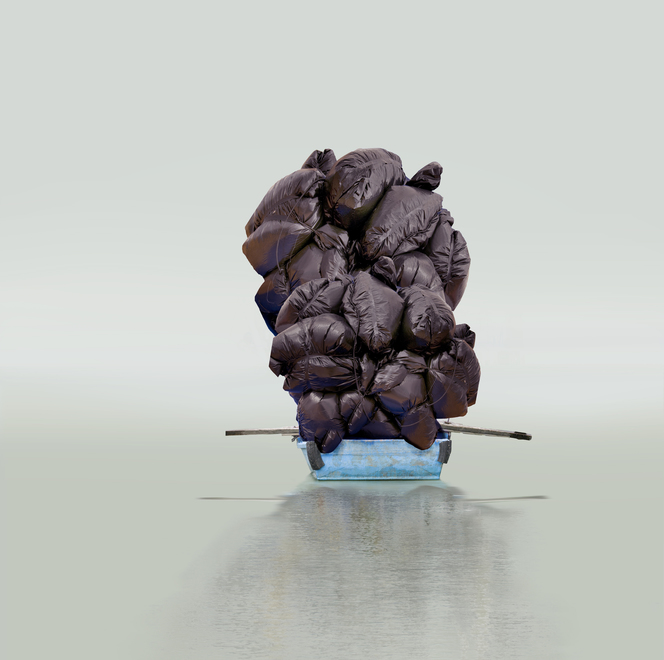 At Home In The World

For her show of new photography and sculpture at Robert Mann gallery in Chelsea, Mary Mattingly first created a number of “man made boulders,” which were made by amassing her possessions and binding them together with light brown twine. Measuring about five feet in diameter, these boulders consist of clothes, journals, keys, bottles, wires, and other miscellaneous items that Mattingly found kicking around her home. Two of these boulders are on display at the exhibition, as well as fifteen digital photographs in which she explores the push and pull between the destructive excesses of consumer culture and the utopian potential of DIY asceticism. Weaving together themes of sustainability and balance, buoyancy and weight, Mattingly’s work provokes a reassessment of our relationship with inanimate objects in a rapidly changing world where survival and destruction, waste and renewal, are the twin poles of orientation. 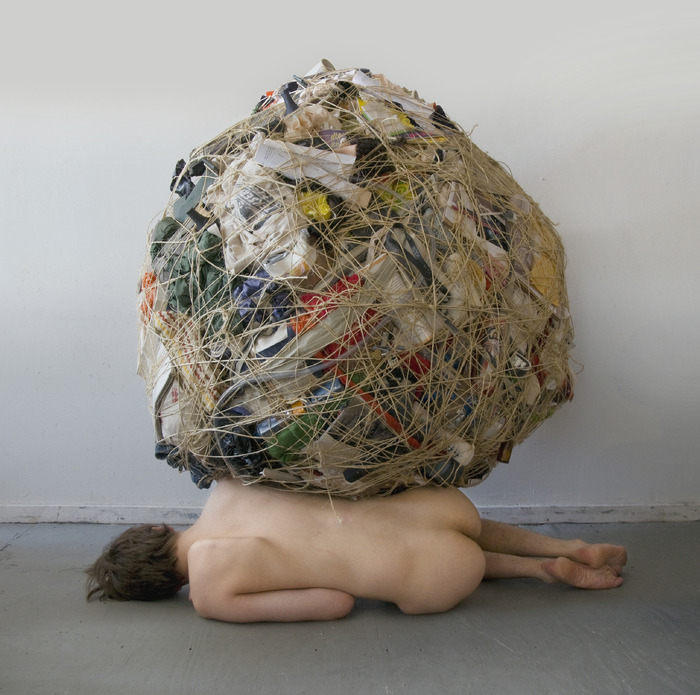 For instance, in Pull (2013), the artist drags a comically massive boulder down a city sidewalk. It looks like strenuous work, instantly evoking an experience familiar to anyone who has ever schlepped their every belonging from one apartment building to another. The same boulder (or one which looks just like it) also appears in The Life of Objects (2013), where it balances precariously on top of a male nude figure who lies dwarfed beneath it, curled up in the fetal position with his back to the camera. These works prompt us to reconsider the age-old truism that we don’t own our possessions so much as they own us.

Sometimes the cumulative weight of things threatens to drag us under, as in A Ruin In Reverse (2013), in which a coffin-shaped boulder lies in a freshly dug grave—inviting comparison to Christo’s Red Package (1968)—or as in Floating A Boulder (2012), in which a row boat carries a dangerously tall tower of garbage bags while drifting towards an indistinct grey horizon. Floating A Boulder is one of the many photographs in the show with an aquatic theme; another is Microsphere (2012) in which a floating globe populated by three passengers is buoyed by a collection of plastic bottles. Flock (2012) depicts one of Mattingly’s “flock houses”; these are self sufficient floating homes that resemble Andrea Zittel’s “living units” crossed with Kevin Costner’s Waterworld. 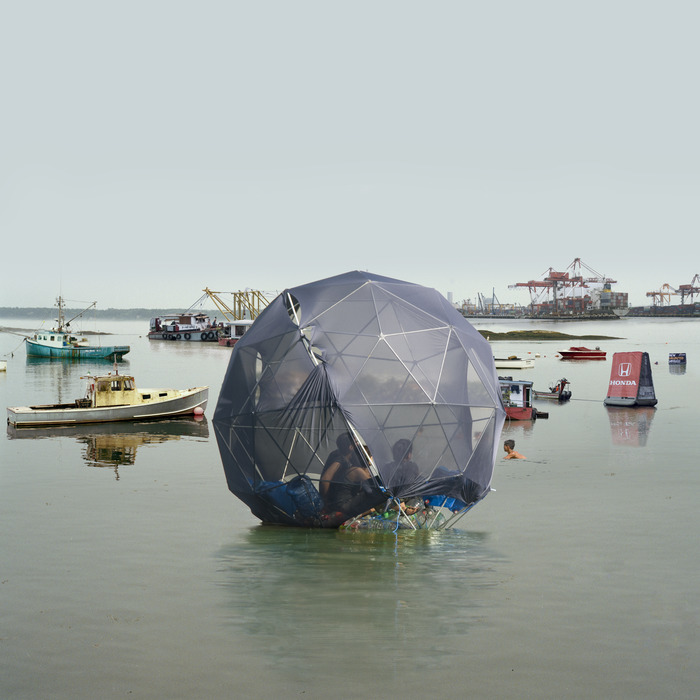 Mary Mattingly’s forays into water-borne sustainable living serve as a light-hearted counterpoint to the oppressive weight of her man made boulders, although there is a levity to the boulders as well: it must have been cathartic for her to clean out her home and repurpose her clutter as art. Mattingly’s work suggests that the accretion of consumer products and man-made waste clogging up the arteries of our planet and our lives can be put to new uses, and that there is hope for us yet.

Amber Renaye Answers 5 Questions
1/14/19
COMMENTS (1)
hI
YA Ilike
Comment by: Asharaf Elshrif on Monday 10/14/13 at 8:14 PM
ArtSlant has shutdown. The website is currently running in a view-only mode to allow archiving of the content.