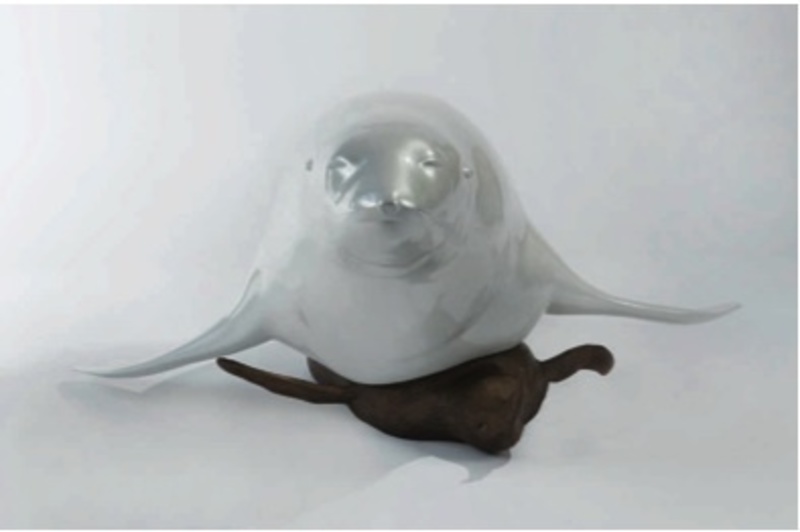 Dec. 2008 - Malia Jensen is an artist based in New York City, who is exhibiting at Richard Gray Gallery in Chicago through the 10th of January, 2009.  Her work features a cast of enigmatic animals in sometimes tragic situations.  The plight of the animals is usually tempered by humor and a high degree of attention to material and the overall production.  The result is work that is poignant, lyrical and sometimes funny, with a tinge of sadness.  We sat down before her opening to discuss her work.

Abraham Ritchie: A lot of writing about your work talks about the use of humor. What does the role of humor play? How do you intend to use it?

Malia Jensen: I think that humor is a survival tool.  It's kind of a counterpoint to a bleakness, and I think that there are both things in my work.  There's bleakness, there's humor and there's beauty.  So it's like they're playing together.  Like with the Bathing Skunk, he's in a sort of dire situation as far as a skunk is concerned.  The skunk is made of cast soap and he's essentially undermining his principal identity as a skunk: being stinky.  He's stuck in this situation where he's made out of soap, which is not necessarily agreeeable to his character.  So it's funny, but also to me it is like a little, tiny tragedy, this skunk.  But it is funny.  Then of course the skunk is also in an implied pool, so he'll dissolve since he's soap.  He's in a predicament.

AR:  The elements of humor that I detected weren't really the laugh-out-loud kind of humor, but a darker humor.  Like with Seal + Penguin 4 Ever the penguin and seal are copulating but it also seems that the seal may crush the penguin.  So is humor a way to, let's say, get a foot inside the door with the viewer and open them up to other possibilities?

MJ: Sure, absolutely.  And so does beauty.  And the finely made-ness of things.  You can seduce someone in, and they might be laughing for a while, but they realize this is somewhat dark.  There's a deep sadness in a lot of the work.  It's like finding a human condition in an animal parallel.

AR: Let's talk about the animal's personae.  Each animal could have a cultural association.  For example, what does the bear mean to you?

MJ:  It's a loaded animal; it classically operates as a surrogate man.  If there's a "man conquering nature" image, it's often man versus bear.  The bear can stand on two legs, it has a parallel "man" feeling.

I think we have a simultaneous fear and sympathy for the bear; the teddy bear is a comfort creature, but at the same time it's the most frightening creature.  You know, "bears came in and stole our children or, bears did this. . ." it's not like we have that same fear of deer.  Or lions.  Lions are so far out of our North American culture and reference, but again we don't think of lions as likely to steal our children or harass us at a picnic.

There's a unique human analog in these primal animals, if you think about our own animal nature.  These particular animals embody that better than any other animals could.  People can bring their own associations to it; I don't say what I think it could be. 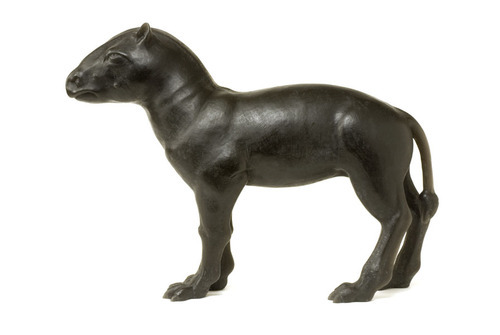 AR:  On the topic of animals of North America, I have to ask, is Dark Horse a chupacabra or something like that?

MJ: It's an eohippus, a prehistoric horse.

AR: Oh ok. So is it smaller than a real-life eohippus would be?

MJ: That's the actual size that it was. I did a series of scale-shifting prehistoric animals, like the 8-foot tall Giant Beaver, the actual height of a prehistoric beaver, and the prehistoric horse was  small, reportedly it was housecat-sized.

So those were also funny, identity-reference pieces.  What makes it a horse?  How, even to a scientist or archaeologist, is that a horse?  We have this attachment to our identities as being fixed: we have evolved, we're finished, we are a species, this is how we look.

But who's to say?  If the horse looked like an eohippus that long ago and now it looks like it does...  Things keep changing.  So I kept playing with that idea, "what is it?"

AR: And obviously by mentioning the chupacabra I brought my own associations to that question.  Recently, I was thinking about how cool it would be if we still had North American Camels and the other mega-fauna.

MJ: Yeah, it would be insane.  The Wrecking Pet piece, was also part of that trio of scale-shifting animals. The prehistoric guinea pig was supposedly the size of a rhinoceros, or something, which is obviously to say that the rhinoceros has a certain given size too.  So a prehistoric guinea pig  was this gigantic thing.  The ones I've made are meant as a studies so they're small, but I want to make it large, prehistoric size, about four feet wide and to be used as a wrecking ball. 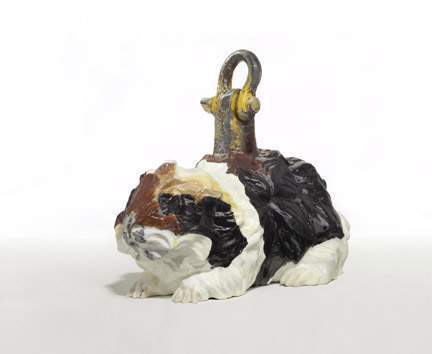 AR: What would that wrecking ball wreck then?  Out of curiosity. . .

AR: So anything that needs to be knocked over?

MJ: Yes.  I figure that having a guinea pig, it's kind of a destructive pet, the only ones that I ever knew were chewing up everything and destroying the house anyway, so I thought it's a good animal to have as a wrecking ball.  Plus, it has the association with "being the guinea pig," it's the test creature, the thing that gets used and abused.

AR: On the topic of guinea pigs and pets, do you own any pets?

MJ: I have two cats.

AR: I noticed that the animals you pick (with the exception of the series we were just talking about) are more domestic, ones that we see in our everyday lives.

MJ: Yes.  I edit my animal choices pretty carefully.  Someone might  say, "Hey here's this leopard and it's totally you."  But that's not really what I would approach, it's like the lion, it's too outside of my reference point.

I think that with what I'm choosing, there needs to be a sense of feeling connected to it.  The Seal + Penguin is a little different because I don't have any relationships with seals or penguins, so that one stands apart.  That piece was based on the article that someone sent me - it was an idea that came to me as a piece already, and it was maybe my job to manifest it.  It was a real situation that I wanted to translate into a bigger story.  I think that the cat whiskers give it a mystical or enchanted feeling.

AR: Because it's so unlikely?

MJ: Because it's so unlikely and there's a kind of romance to it.

MJ:  I grew up in the country, in Oregon, and it definitely did impact my thinking.  I was the kind of kid with invisible or imaginary friends. I would make up scenarios that could play out in nature and in the imagination rather than with friends.  I also had a sense of empathy with beasts.  So place is really important, how can it not be?  It's also how you construct things in your own interior landscape.  Like there's a stage, there are players.  For me, it all has a certain logic.  It's not surreal, in the sense of nonsensical or disjunctive situations.  It all makes a certain amount of sense and there's a logic that I adhere to.  It may have been something that I made up, but it adheres to it.

ArtSlant would like to thank Malia Jensen for her assistance in making this interview possible.

Posted by Abraham Ritchie on 12/29/08
Tags: sculpture, mixed-media, conceptual
ArtSlant has shutdown. The website is currently running in a view-only mode to allow archiving of the content.