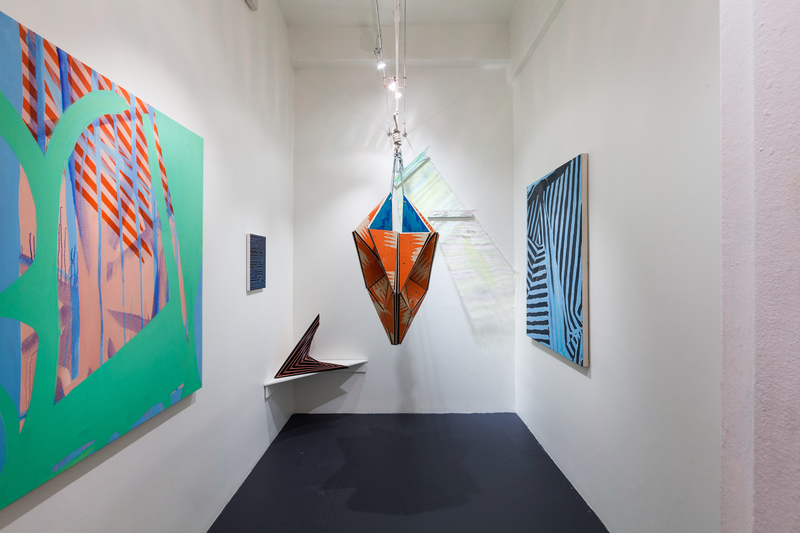 Among rising gallery rents and the endless expansion of larger cultural institutions in New York, micro-spaces like ArtBridge’s Drawing Room offer a respite. Ramshackle Kaleidoscope, curated by Jordana Zeldin, is a bite-sized summer exhibition that explores a wing of New Casualism. The smallness of the space – it was once a closet – is suited to the works on display: they are approachable objects, and converse comfortably with each other. Casualists tend towards the jokey and intentionally timid, but the three artists here – Christian Sampson, Amelia Midori Miller, and Sarah Bednarek – show sincerity in their practice, creating, in Zeldin’s words, an “understated transcendental beauty.”

Ramshackle Kaleidoscope turns the space into a jewel box illuminated from within. A hanging sculpture by Bednarek called Crystaline Droplet (2012) anchors the space. The piece is made of angular painted plywood pieces held together by tyvek, allowing the sculpture to unfold: it changes shape but follows its inherent geometry, a fitting spoke to the works around it. The room allows just enough space for one or two people to stand on any side. Another piece by her sits on a shelf in the corner of the space, geometric lines relaxed into place along a central fold. 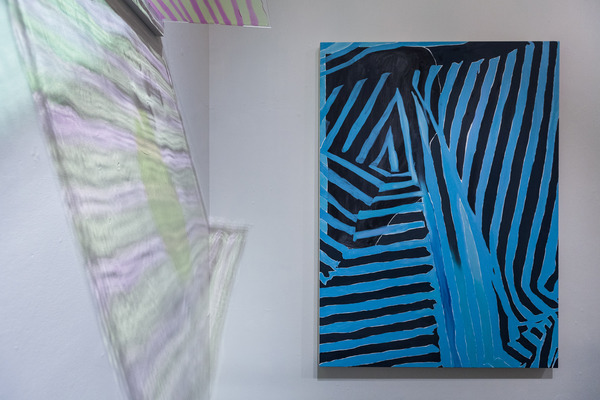 Sampson’s semi-translucent acrylics jut out from the walls, glowing with shades of purple, green, and yellow. They are descended from the Light and Space movement, but without the hermetic, grandiose statements that characterized many of those artists. The colored stripes in the acrylics look as if they were poured or painted a few minutes ago; the LED lights shining through them throw not only their patterns but the vaporous structure of the acrylics onto the walls. Projected Form Double (2013) is made up of two acrylics with intersecting shadows; one has a circular gel taped to it, a lighthearted touch that adds a center to the pattern.

The irregular stripes and layers of Miller’s paintings seem to fold in on themselves, or perhaps bend and slide under each other. Across town, at Garis and Hahn, Dying on Stage: New Painting in New York (which just closed on July 20th) surveyed the techniques and styles that fall under New Casualist painting. Like those artists, Miller is confident enough to let the irregular lines of her hand become a part of her patterns. In Tie Down (2013), gently curving blue and black stripes lie adjacent to each other but show hints of the white ground underneath. 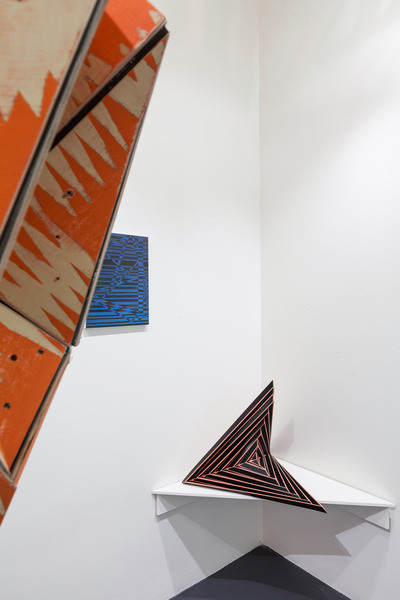 All of the works play with the idea of flatness and pattern: Sampson’s overhanging acrylics project versions of themselves, the creases in Bednarek’s works become part of their pattern, and Miller’s paintings hint at depth and folds. The many stripes and fractures here pair well with their handmade look. By using modest gestures to take on daunting histories of painting and installation, these artists create works of vibrancy and warmth.