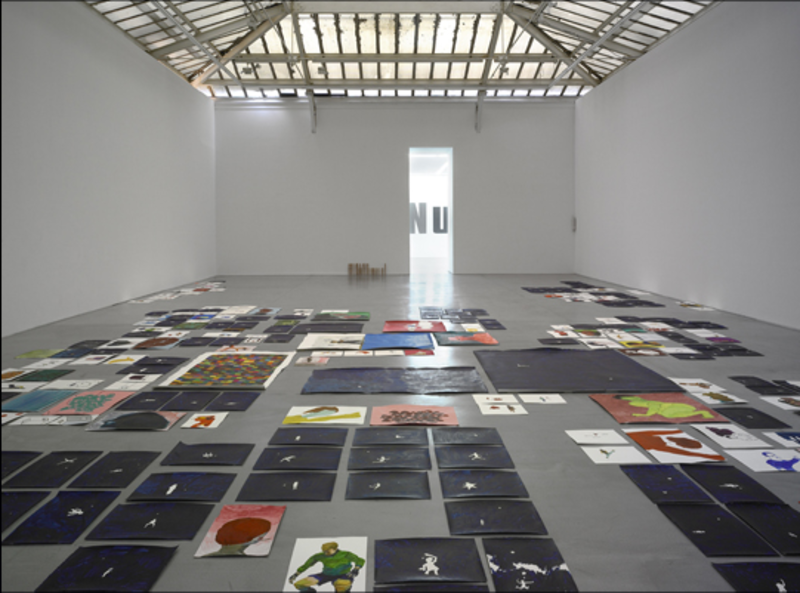 Knowing about Koo Jeong-A's fondness for words and particularly the way they sound when pronounced, ArtSlant asked Nicolas Nahab, the coordinator at Yvon Lambert in Paris, about the significance of the name of her exhibition, new song, o, at the gallery in January of 2009. "We think it's a kind of homage," he said, "but she won't say directly what it's about, or to whom."  He continued, "With Koo, she'll be very open to whatever interpretations people draw from her work but will be very reluctant to tell you anything definitive about it.  Like the blue paintings in this show, they are all entitled TTS, but she's very mysterious; she won't say what it means, even to me and I've worked with Koo for years."

ArtSlant writer, Natalie Hegert, and Editor in Chief, Georgia Fee, met with Koo on the eve of her vernissage at the gallery.  She was just finishing up the full-room installation consisting of three separate pieces: a floor piece of watercolors; a standing sculptural piece of muted flutes; a corner piece consisting of a paper tube mounted about eye level.

The watercolors on the floor - richly painted, assorted sizes, some sketches, others more finished - occupied the cavernous room with a surprising fullness.    Coming close to the walls on some sides, the color and light of the drawings reflected up the walls, energizing them and giving a 3-D affect that was astonishing.  The walls no longer felt empty as they became an integral part of the piece.  The flute piece sat quietly against the back wall, almost watching over the sprawl.  In the corner, like an after-thought or secret message, the tube hung precarioulsy, empty - did it once contain drawings?

Walking among the passageways between drawings, carefully like one would walk along a natural path, Natalie and Georgia talked with Koo about her process, her paintings and her poetry. Being able to wander through the paintings and gaze down upon them gave a very intimate and interior experience - like exploring the inside of someone's thoughts or dreams, or perhaps like reading a personal diary.

The following remembrances from that conversation.

Koo Jeong-A, Mountain Fundamental, 1997-2009, Stone powder on wood table; Courtesy of the artist and The Museum of Fine Arts, Houston

Natalie Hegert:  So you're living in Paris?  How long have you lived here?

Koo Jeong-A: Actually I now live in Berlin and London. Now I go from one to the other depending upon my work and other things.

Georgia Fee: Both Berlin and London?  Which one do you like better?

KJ:  I like the combination.  Living in London, it's a big anonymous city, and in Berlin life is slower. I have many friends in Berlin whom I see a lot and a great apartment.  In London, I see less friends, my social life is mostly with people from the art world.

GF:  Which one do you call your "country house?"

KJ:  London - because my life there is much quieter, less distractions.

GF:  You began your career in Paris?

KJ:  Yes, I left Korea and went to Paris for school--in multimedia, performance, installation art.  I got into site specific installation.  I started working in the 1990's and now when I look back on that time I think it was a really special time to be starting as an artist.

NH: Where you influenced a lot by your contemporaries at that time?  What are your biggest influences in art?  Friends?  Any other artists?

KJ: I can't say.  I like poetry and writing.  My friends.  I have many artists whose work I like. (During our walkthrough, Niele Toroni came to visit and wish Koo good luck.) 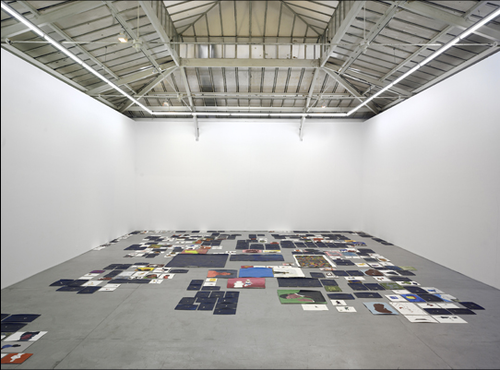 GF:  Have you been influenced by arte povera?

NH:  So what does the title New Song, O mean?  It sounds a little like your name, Koo Jeong-a...

GF:  Do you spend a lot of time thinking about titles?

NH:  How do you approach a space when you create works in situ?  Does the place itself inspire the work or do you already have a plan for it before you arrive?

KJ:  It depends.  I've shown here at this gallery before, so I know the space already.  These drawings were all made for this exhibition...someday I would like to have a studio large enough so that I could layout my pieces before installing them.

GF:  What made you lay them on the floor like this?

KJ:  I don't know, I just started putting them there.  You can walk around them, walk through them.  I made pathways.

GF:  Do you paint everyday?

KJ:  Sometimes.  Yes I draw a lot, I really enjoy making these drawings.  This year, painting has been very special.

NH:  Are they memories?  Dreams?

KJ: Sometimes memories, maybe sometimes dreams.  Like when you have a really vivid dream. 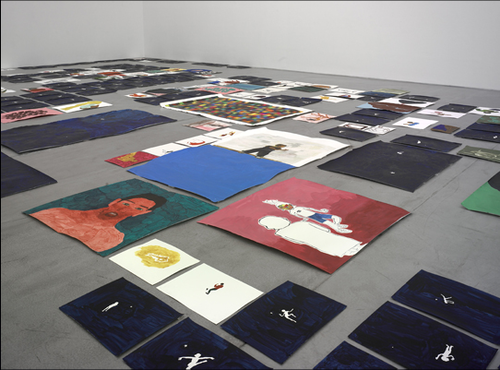 GF:  Are your drawings maybe a way to experience your emotions?

KJ:  No I wouldn't say that really, not at all.  Emotions are completely different.  It's just all sorts of things.  Nothing is forbidden.

GF:  You have some recurrent themes like dogs, foxes and portraits.  Where does your subject material come from?

KJ:  There are foxes in my neighborhood in London, red foxes.  Pictures of my friends, or people that I see everyday.  Like people I see at the newsstand or in the neighborhood or something that happens.  I like the painting, spending the time doing this, the way I feel when I am lost in it.  It is an extraordinary experience

GF:  Most of your drawings are of these night scenes, the blue ones--why did you make so many of these?  Did you do them all successively?

KJ:  I got really into the color for these--Prussian Blue.  (Note:  There are a large number of Prussian blue watercolors of a dancing figure and a star.  Koo explained that she was very drawn to this color of blue; she knew a woman who did textile dying using indigo and became attracted to this color through the connection with this woman.)

GF:  And the installation of the flutes, where did you get these?

KJ:  From the internet, they came in a bulk package.  Then I sanded them all by hand to take off the varnish, then plugged the holes with clay.  A flute without holes, there's one word for it in Korean.  It comes from a poem.  That's what I was thinking about when I made this piece...the toneless flute.

NH:  The first time I saw your work was on the internet--just pictures.  Only later did I read about you.  For some reason, after seeing pictures of your installations I was not surprised you are a woman even thought I didn't recognize your name as a female's name.  Do you feel that you have a sort of "feminine touch" when it comes to art-making?  Would you even describe it that way?

ArtSlant would like to thank Nicolas Nahab from Yvon Lambert and Koo Jeong-A for their assistance in  making this interview possible.

Posted by Natalie Hegert on 12/27/08
Tags: mixed-media, installation
ArtSlant has shutdown. The website is currently running in a view-only mode to allow archiving of the content.