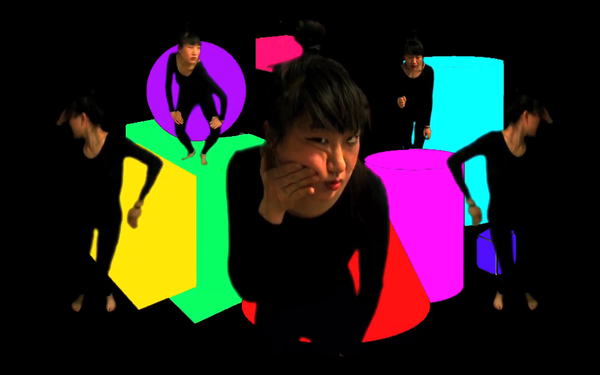 Laura Hyunjhee Kim, Be My Clone (screen capture), 2013; Courtesy of the artist.

Joel Kuennen: Could you describe your artistic practice for us?

Laura Hyunjhee Kim: I make videos that often feature many-of-my-selves that blends and bends mass media, art history and autobiography. I am hesitant to say that I collaborate with myself a lot as it accentuates my inner-narcissism to a ‘certain’ extent, but I will have to admit that it is kind of true. A lot of my single-channel videos incorporate self-moderated dancing, repetitive homemade music, flashing moving images mostly outsourced from the Internet and, last but not least, I top it with a splash of subversive deadpan humor. In most cases, I pull a lot of my ideas from everyday sources that are generated/recycled by contemporary culture and the people who participate in producing/consuming it. In other words, if an epic scene from a Hollywood James Franco movie or a 6.5 second Vine video consumes my time and instigates me to share it with others, I am inspired to create a video that generates a conversation or a commentary about it – throwing the question back to myself and to the world, why?

JK: Where did you go to school? What did you study?

LHK: I was born in California and moved to Seoul, Korea, when I was nine. Growing up, art and music has always been around me and I would spend hours and hours drawing, constructing something with boxes and I can’t even tell you enough about the intricate sofa pillow forts that my brother and I would construct. Later as a teen, I moved to the U.S. to study biology at the University of Wisconsin, Madison. At that time, I was deeply interested in animal behavior and wildlife studies which still bleeds into my work a lot. However, after taking a Renaissance Art History course along with a few Foundation Art classes, I realized that I wanted to learn more about contemporary art. Also, by being part of Starlight Cinema (a university-funded student-run live performance/video venue) and the Mimist Collective with a tight cosmic-bound group of friends, I was able to meet and watch my favorite artists perform or present work live such as Shana Moulton, Erica Magrey, Nao Bustamante, Laurel Nakadate, Daniel Barrow and Kalup Linzy which only further fueled my love for video and performance art. Self-motivation is very important to me and when I feel that drive within myself, I have to go for it. Afterwards, I attended the New Genres program at the San Francisco Art Institute where I axed a television set into pieces for my very first grad critique and had the blessing to work with mentors – Tony Labat, Tim Sullivan, Allan DeSouza, and, the one-and-only George Kuchar – who challenged me through the program.

JK: What do you do for a living?

LHK: The best way to explain it would be, ‘I do the San Francisco thing for a living.’ Until recently, I was at a game company as an associate producer working closely with developers on a mobile RPG and now I am getting ready to start a new gig at another tech-related company. Balancing out life and maintaining artistic practices could be challenging but I am realizing that it is a matter of perspective and have been thinking of it more as a springboard for inspiration. Also, I think it is important for artists to experience and communicate with the world outside of the artworld, which often times becomes a comfort zone for dialogue.

JK: How has the Internet and society online influenced your work?

LHK: GREATLY. The fast-paced modes of communication, the decreased retention span to withhold information, numbness to shock and entertainment have all been factored into my own work. Also, online communities and hybrid-cultures procreated by active and competitive ‘sharing’ from one individual to a massive group of people have been very interesting to me since the day I created my first email account through a dial-up modem. What has been shared yesterday is pushed back by today’s influx of newness. As an artist, I tend to think of myself as an archivist, recycler and highlighter of what is bound to become extinct tomorrow.

Also, I am very much interested in the online distribution of videos through user-driven channels such as YouTube and Vimeo. As someone who utilizes minimal set-ups in a studio apartment and takes full advantage of the current convenience in video-making technology, I often catch myself being influenced by another person (perhaps self-identified as an artist or not) who had the motivation to make a video and post it online. Speaking of '"post" it online,' I also enjoy observing words that have been created/modified through constant online engagement that brings about confusion. Verbalization of nouns, memes or utilization of extensive acronyms are all good examples of that phenomenon. While these words are intended to add on to a fast-paced conveyance of an idea (whether it is an exchange of information or just straight-out humor), I frequently find myself ‘googling’ the word to find its written-out longer definition and giggling a beat afterwards. All of this has been taken into account in my latest works.

JK: Your videos are often in the form of music videos – what is it about this genre of moving-image production that you find so intriguing?

LHK: I spent my teen years in Korea as a huge fan of K-pop and my sole engagement with Western pop music was mostly through the radio. When I was finally exposed to Western music videos, which was either through Internet access or through AFKN (Air Force Knowledge Now – a television broadcast by the U.S. Air Force that was viewable in Korea), I was intrigued by how similar they were formally to the then-hot-90s Korean music videos. The language and the cultural references differed but they were stylistically pronounced as the same form of videos that were identically dictated by the lyrics and music. Since then, I have been aware of the stylistic shifts and trends in music videos and have been intrigued by the fact that moving-images and sounds could become a powerful tool for expression that transcends locality.

Blurring the lines of art and entertainment is appealing and I enjoy exposing the common grounds of both due to my relationship and attitude towards making art. Consequently, for me, mediating familiar imageries and appropriating stylistic formalities of popular music videos are my attempts in speaking and communicating with a certain tone and language that most people have already been exposed to.

JK: Your work tends to blur the line between performance art and new-media/video art – where do you see yourself and your work fitting in these genres? Did one come before the other or have they developed simultaneously?

LHK: My primary interests in the moving-image prompted my interests in performance art. When I first started making videos intended as a form of art, I used my brother as the main performer because I was mesmerized by the moving-image itself as a medium and was in love with Michel Gondry’s work which involved numerous handheld shots and intricate usage of camera angles and sets. However, after a few pieces, I decided to step in front of the camera and realized that there is an additional layer I could add on as being both the cameraperson and the performer. All in all, I make videos with various degrees of on-camera involvement as a documented performer and also as a live performer in front of spectators. However, frequently, the lines of which specific traditional genre I fit in blur with each other because I tend to utilize the optimal medium that fits in with the project. After all, it is the idea that propels me.

JK: What is your preferred way of presenting your work? What issues in the past have you had to overcome in the installation and presentation of new media work as an effective art form?

LHK: For me, I see my videos as being completed the moment they have been exported as finished files. Hence, as long as I have the viewing equipment and electricity to show my videos, I am quite flexible when it comes to presentation. I also share my work online as well, which opens it up for the viewers either to watch it individually or with a group. All in all, I tend to maximize the versatility that video technology and its distribution have brought upon us, which I think is where its effectiveness as an art form comes from in this day and age.

JK: Tell us about your current show and any new projects you're working on...

LHK: I am currently exhibiting a seven-channel looped video installation in a shipping container at SoMArts, San Francisco, in a group exhibition titled Electronic Pacific and preparing for an exhibition, And We Carry On, in Oakland at Krowswork Gallery that opens in August. Alongside, I have been engaging a lot with the online video/net art communities and showing my videos through SPAMM (Super Art Modern Museum), netartnet.net, The Wrong – New Digital Art Biennale that are new digital platforms/channels that fellow emerging video artists should definitely look into!

ArtSlant would like to thank Laura Hyunjhee Kim for her assistance in making this interview possible.

Posted by Joel Kuennen on 7/28/13
Tags: new media, video-art, performance, digital
ArtSlant has shutdown. The website is currently running in a view-only mode to allow archiving of the content.