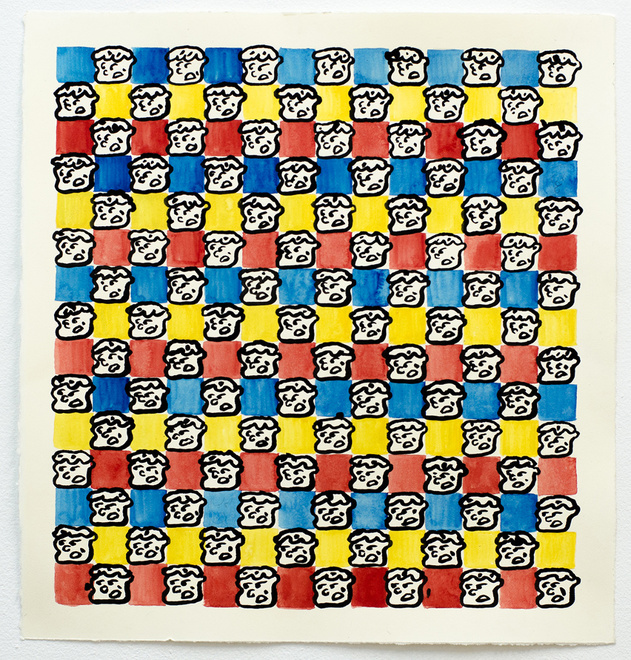 Humans have a tendency to anthropomorphize the world around us—from pets in sunglasses, and cacti with bulging eyes, to building facades whose mouths swing open. We also like to draw, to represent the world on paper. These impulses are given full energy in James Ulmer’s current show, Drawings, though it is hard to tell if he has distilled once complex images into pictograms, or if he has instilled irregular shapes with the diverse personalities of a cast of characters.

Seventeen densely populated works executed in black ink with occasional touches of watercolor line both the sides of the gallery, leading one to the rear wall where their blown up and much looser counterparts are prominently hung. In these pieces individual characters are sketched on found sheets of paper that vary in size and color. They seem to represent hedonistic pleasure, sloppiness, and child-like freedom; however, they are the product of deliberation and repetition. Each shows the best versions of a character that have been drawn over and over in the smaller works.

The most tightly controlled piece in the show is Big Drawing (2013), a compendium of hundreds of tiny drawings. Ulmer began this piece by drawing all the shapes in a paper-thin line, and then went back in with a thicker line to create characters, an exercise designed to spur invention. An upside-down letter “U” becomes a man bent over with his head on the ground, or, in the neighboring shape, it’s a dolphin sticking his nose in a sauce pan. And an “L”-like glyph could either be a person in profile, or, one row up a column over, a baseball bat hitting a globular head. Together these forms become a comical alphabet of the artist’s subconscious. 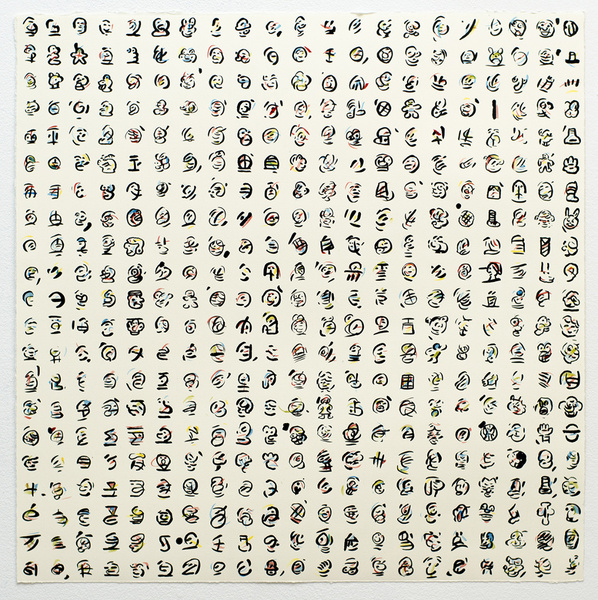 Abandoning the discipline of Big Drawing, Daily Life (2013) is crammed with rows of triangles and parallelograms, into which teeth, eyes, knees, feet, noses and hats have been wedged. Action travels up and down the page like a game of chutes and ladders. Elsewhere, as with Colored Shapes 2 (2013), bundles of fluid lines are uniform in size and neatly separated by invisible grids. The format seems to directly reference Chinese calligraphy, and in fact Ulmer spent a month on vacation in Taiwan last summer. There he was influenced by the hand made signs and writing on the street, which looked to him like drawings of quirky cartoons. In Taiwan Ulmer added a new style of brushwork to his vocabulary that has opened up the compositions of his drawings,

In other works, geometric shapes sprout limbs and amble across ruled walkways, as in Women (2012). They become trapped in checkerboard boxes in Man/Men (2013). In New Shapes (2013) the figures begin to meld into one another, reproducing and morphing with each iteration so that they resemble distorted moving images. At times the show comes off as a joke on animation written by an ardent fan who is capable of revealing the foibles of the medium for the benefit of a knowing, insider chuckle, and then smothering those flaws with love. One grid of near-identical boy heads woven in with primary colored squares is called Cartoon Face (Smile) (2013), while its pair is titled Cartoon Face (Frown) (2013). All it takes is an inexpert turn of the corner of a mouth, up or down, to convince the viewer of this character’s mood. And yet for all the evident care involved in representing these cartoon faces, one also gets the feeling that the spark of life they possess may be little more than a cheap trick. 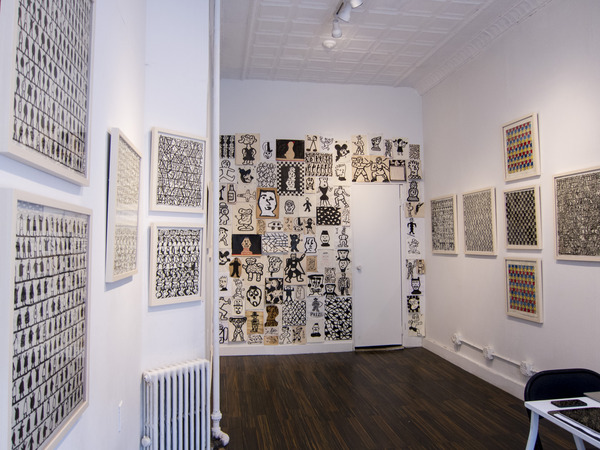 In this show, Ulmer has proven himself as a scholar of his medium, pursuing cartoon imagery with a lack of reverence well-suited to the discovery of new meaning. He is not a copyist or an embellisher who creates these shapes and word-creatures as an end unto themselves, but a critical jokester, always willing to turn something loved on its head in order to see how it functions in another format.

(Image on top: James Ulmer, Cartoon Frown Face, 2013, ink and watercolor on paper, 16 x 17 in.; Courtesy of the artist and Beginnings Gallery.)

Je Suis Charlie: The World Mourns for Freedom of Expression
1/8/15

An Overdue Retrospective Faith Wilding
1/17/14
COMMENTS (0)
ArtSlant has shutdown. The website is currently running in a view-only mode to allow archiving of the content.