Last weekend I travelled to Basel for a conference. It's been years since I was in Basel, so many years, that my memories of the city are vague, but after twenty-four hours, I remembered where I was. Things tend to stay the same in Switzerland. In the years since I first went to Basel, the world has become a smaller place, Russia has assumed a role as a world power, China has become a leading economic and political force to be reckoned with, the Middle East has become increasingly unstable, global warming has descended on us, and technological innovation has come to shape us. While the world moves around it, Basel remains clean and orderly, colourful, and one of Switerland’s most creative cities.

Visiting at this time of the year is always better than in the dead of winter. For all of my conviction that Switzerland is unchanged to the point of stagnation, my first impression of Basel was surprise at the vibrancy and vivacity that animated the city. I have always known Switzerland to be very proper, very conservative and, when I first visited on a trip to Lausanne in 1983, Switzerland was quiet. In Basel, thirty years later, I was pleasantly surprised by the noise and lateness of the nightlife in the center of town, the number of strollers wandering the streets on a Sunday morning, the groups of young people enjoying each other’s company. While the familiar Swiss opulence pervades the streets and its strollers, it was refreshing even to see traces of multi-culturalism and ethnic diversity.

Perhaps my favorite moments in Basel were spent running along the River Rhine, a river that is at its grandest when it passes through Basel. Running along the river is something I do when I arrive in a city, but it’s not always a perfect experience. I think of the uneven potholes along the Tiber in Rome, the difficulty of accessing the banks in places along the Thames and the risks of being hit by a bike on Amsterdam’s canals. However the Rhine at Basel is majestic, and sheer joy to run with. After Paris, where the banks of the Seine are cement constructions, the natural definition of the Rhine at Basel is fascinating, ever full of surprises, unwieldy and, in places, overgrown with vegetation.

Unlike the banks of the River Seine early on a Saturday morning, the Rhine was alive. The tourists were out on boats enjoying the perfect weather, rich people were on cruises, a regatta was being rowed, with each poetic stroke of the eights echoing the nobility of this great river. The Rhine was sparkling in the sunshine. As I ran past the oarsmen taking the boats out of the water, I heard them speaking a whole host of different languages – English, French, German, Italian. The multiple languages speak the unique character of Basel. Perhaps more than any other European city, Basel is truly a border town, with Baden Wittemburg in Germany and the Alsace region in France meeting Switzerland at Basel. Every time I mentioned the train station to one of the locals, they asked me if it was the Swiss or the German station. The city’s location along the borders of France, Germany and Switzerland appropriately echoes its history as a city where peace negotiations have taken place over centuries. 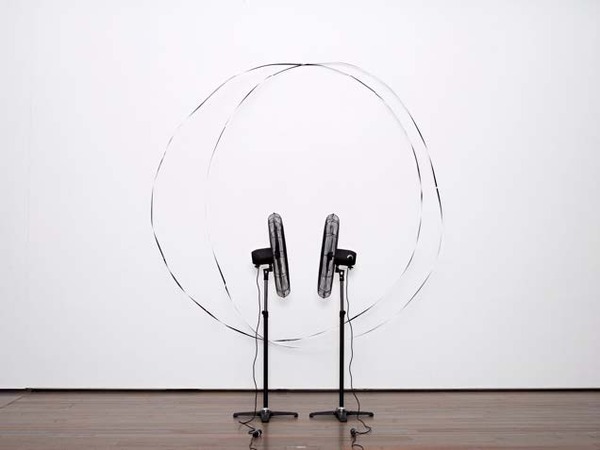 With the city buzzing with Art Basel, my only disappointment was that I didn’t spend more time in the Kunstmuseum and the Kunsthalle, both with their reputable collections. I did, however, sneak away for an afternoon at the Museum Tinguely. The museum built as a cathedral to Jean Tinguely’s sculptures is perfectly placed on the banks of the Rhine, its glass facades looking over the river at every opportunity. The Tinguely museum was full of the Swiss artist’s machines and sculptures, objects that creak and chime, sending their magic and motion throughout the huge building designed by Mario Botta. The museum is a child’s dream come true, and the afternoon I visited there were children of all ages, captivated by the unusual contraptions and creations that whirl and whistle at the most unlikely moments. As I watched the captivation of both children and adults alike, I reflected that perhaps Switzerland is not as staid and stagnant as I always assume it to be. At least, here in Basel, there are always surprises for the unsuspecting visitor.

Art Basel 2015: Your Guide to Basel Fairs and Art Institutions
6/16/15
COMMENTS (0)
ArtSlant has shutdown. The website is currently running in a view-only mode to allow archiving of the content.