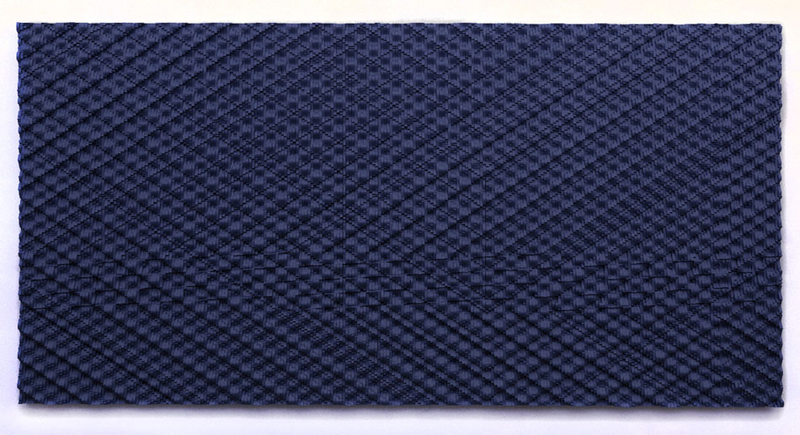 New technology can be genuinely disruptive. The same week the group show “Xstraction” opened at The Hole Gallery, a company called Defense Distributed published digital blueprints for a potentially lethal, plastic pistol that could be fabricated at home using a 3D printer. The plans were quickly forced off their website by the US State Department. A 3D printer renders raw materials such as plastic, paper, metal, or other substances into objects, making it possible to manufacture nearly any small product one desires—whether guns or artworks. “Xstraction” seeks to catalogue the ways in which artists are integrating new technology and a DIY ethic into their work, showing from-the-street, from-the-factory, or from-the-desktop approaches to painting. It largely succeeds, though the results aren’t always as novel as the tools.

“Xstraction” follows from two 2008 exhibitions at Deitch Projects: “Subtraction,” curated by Nicola Vassell, and “Constraction,” curated by Kathy Grayson (who also curated this show). “Xstraction” is big, featuring thirty-six artists—three times as many as those previous shows combined. The exhibition aims at exhaustiveness and informational wall texts for each artist are hung throughout the gallery. They mostly describe working processes in a way that suggests that new methods produce new, provocative work, and that knowledge of how a work is produced is tantamount to knowing what its significance is. 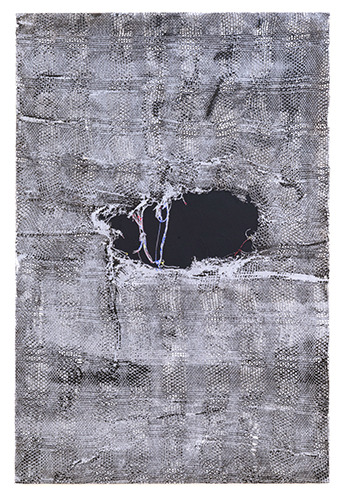 Mark Flood, Metropolitan Hole, 2013, acrylic on canvas, 60 x 40 inches; Courtesy of the artist and The Hole.

The exhibition explores several varieties of extraction as an artistic operation. There are paintings of cruciforms, works that extract imagery or procedures from digital and industrial production, paintings whose images appear excised, leaving only a palimpsest. Mark Flood’s Metropolitan Hole (2013) looks like sagging burlap stretched over the face of a canvas, but its weave is flat gray acrylic with gaps between fibers rendered as a tiny grid of burnt umber and white mounds. The textile is displaced and the negative space made substantive.

Viewers can see the interpenetration and varied formal strategies of these themes throughout the show, but it’s a bit of a jumble; significant differences between the artists are downplayed. The industrial austerity and emotional superfluity of Davina Semo’s IF YOU NEED AN ANSWER NOW, THE ANSWER IS NO (2013), an X-shaped tapestry of heavy chains, is unmatched by the majority of artworks. The use of lasers to cut materials or computer programs to design images doesn’t approach the intellectual and visual expansiveness of Semo’s manual craftsmanship. Her ideas about the relationship between vocality, materiality, and Romanticism do not rely on new technology to attain their freshness. 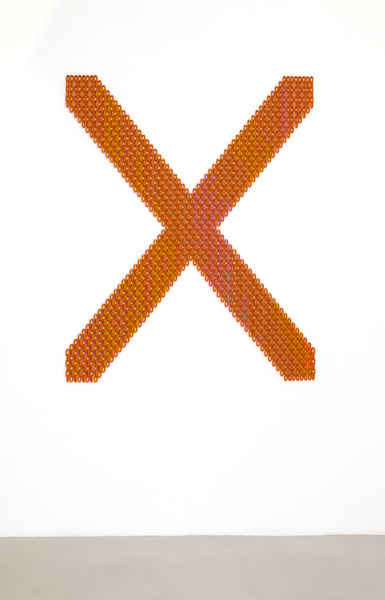 Conversely, it would seem that paintings by Trudy Benson, whose work is based on images created via a computer paint program, are similar to those of Jonathan Lasker, whose work was rooted in drawings long before anyone dreamed of MacPaint, Corel, or Photoshop. The new, supposedly disruptive technologies and techniques on display here mostly generate conservative paintings.

Grayson proposes genealogies for the various artists, citing Rudolf Stingel and Peter Halley. Such comparisons suggest that far from being about novel trends in painting, “Xtraction” is an examination of what has been and remains vital artistic territory despite recent inventions. Sometimes new technology isn’t as disruptive as we might believe. And sometimes disruption is just not that interesting. It may be that an increasingly digital media environment invites greater reflection about the experience of tactility and materiality in painting. One certainly senses this when the wall text encourages you to pick up and move Thomas Øvlisen’s sculptural fiberglass paintings. That’s a good thing.