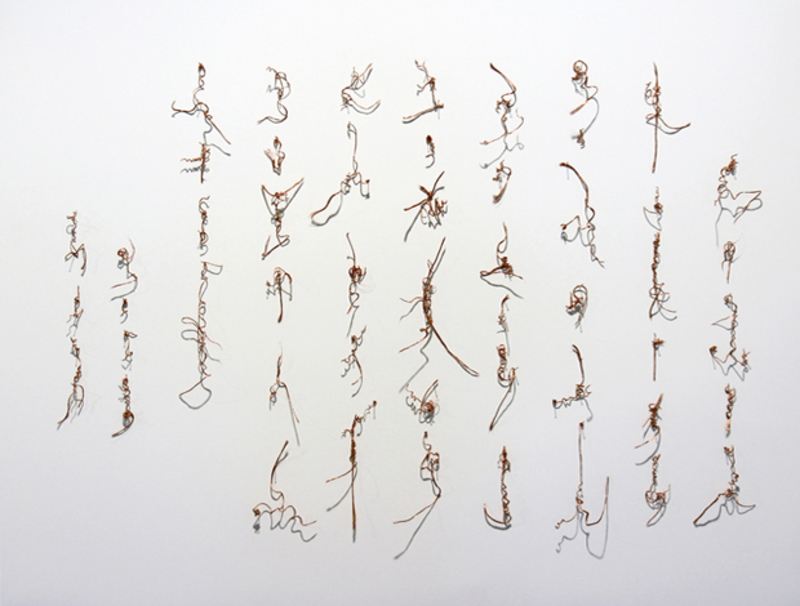 I remembered my desire to meditate more often when I visited “Cui Fei: Tracing the Origin” at Chambers Fine Art. The moment I ducked into the gallery I was overcome with a sense of quietude. I muttered aloud to myself: what is the Chinese equivalent to the Japanese concept of wabi-sabi? As I scanned the twisted metal and vine that makes up much of the work of this young Chinese artist, I remembered that the origins of “Wabi” (despondence) and “Sabi” (solitude) are distinctly Chinese.

Cui Fei graduated from the Zhejiang Academy of Fine Arts in Hangzhou, the capital and largest city of this Eastern China province. After moving to the U.S. nearly twenty years ago for graduate school, she eventually settled in New York City, a similarly bustling and congested metropolis that might have reminded her of home. While her sculptural installations utilizing natural materials—and more recently man-made ones—retain a debt to traditional Chinese culture and philosophy, they also embrace the plurality of modern life. 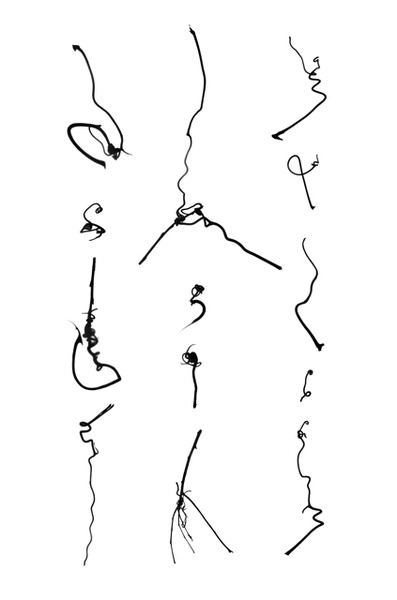 Fei has been creating work that draws on the relationship between natural materials and calligraphy—“beautiful writing,” the highest art form in ancient Chinese culture—for more than a decade. Calligraphy in China has an ancient history; it ranks it alongside poetry as the definitive means of self-expression. How one wrote—one’s style—was as important as the content of the writing itself. Fei has a background in ink painting though none of the works on view from either series (“Manuscript of Nature” and “Tracing the Origin”) use bamboo brushes or lampblack cakes. Instead, Fei employs the bend of fronds, copper and steel stereo wire, as well as thorns and seeds which she arranges into meticulously regimented rows. The torqued and twisted shapes in works like Manuscript of Nature V_003 (2012), a framed installation of tendrils pinned to board, or Tracing the Origin IX_I_i (2012), a gelatin silver photogram of their imprint, hearken back to Chinese running script, a fluid and dynamic form of writing that was only used by the elite and highly educated prior to Mao Zedong’s reign. Moving away from natural materials, Fei considers how manmade objects can be inspired by nature in Tracing the Origin XV_001 and Tracing the Origin XVI_001 (both 2013). Rendered in elegantly fashioned copper and steel wire, these works suggest a calligraphic text that appears to float on the wall. Only on close inspection do the pins that hold the “characters” in place become visible.

It’s naive to think of calligraphy as something relegated to the olden days; this art form permeates Chinese life to this day. Brush calligraphy can still be seen on temple name plaques and shop signs. Its legacy as a marker of the cultural elite remains firmly entrenched in society. Fei’s work honors the cultural authority of such “beautiful writing” in material and feel, while simultaneously refusing it. The sculptures and installations in “Tracing the Origin” do not translate as literal, coherent text, or proper Chinese calligraphy for that matter. Fei’s forms cannot be read. Instead one might consider the individual elements that comprise these works as meditations on the interconnectedness of human beings, the beauty in perfection, or the order in chaos. Fei’s artistic manipulations suggest a broad conversation in which nature is both a human fabrication and a generator of its own reality.