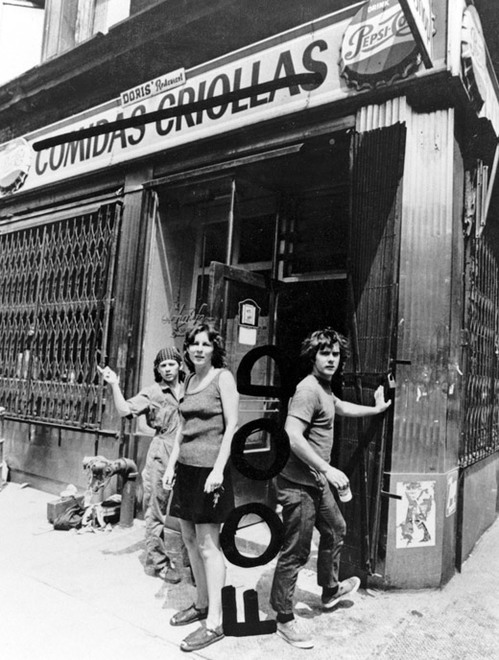 This year’s Frieze New York fair sees the Projects portion of its programming celebrating FOOD, the historic restaurant-artwork hybrid most associated with artist Gordon Matta-Clark. While the Projects’ inaugural theme was turning Randall’s Island into a “fantasy world,” according to curator Cecilia Alemani, its second year focuses on “basic actions such as eating, drinking, speaking and praying… [engaging] the ritualistic dimension of the fair and the unique landscape of the island.” FOOD fits rather nicely in such a curatorial context, and is accordingly receiving this year’s tribute to local artist-run spaces and initiatives.

Cofounded by Matta-Clark with artist Carol Goodden in 1971, FOOD was a seminal piece of New York art. It occupied the corner of Prince and Wooster Streets, neighboring 112 Greene Street, the influential and prototypical art space extant today as the gallery White Columns. It’s easiest to describe FOOD as a restaurant run by artists, yet that definition elides the project’s many functions. It was as much a community center as a business. And though the business aspect was a great deal of its appeal, as a restaurant run by artists it was considerably more sympathetic to the caprices of an employee’s schedule. The food itself was as much an artistic medium as a form of nutrition. Exemplary of FOOD’s approach was Matta-Clark’s "bone" dinner: marrow and oxtail soup, the remains cleaned at the meal’s end and strung as jewelry for the diners, which mostly comprised fellow artists, musicians, and dancers from the downtown scene.

Frieze has enlisted a number of artists for its celebration, entitled “FOOD 1971/2013.” Founders Carol Goodden and Tina Girouard as well as artists Matthew Day Jackson and Jonathan Horowitz comprise the chefs. Goodden and Girouard both do a bit of historical reenactment, with Goodden serving soups from FOOD and Girouard recreating Matta-Clark’s pig roast, originally staged in 1971 under Brooklyn Bridge. Horowitz, who once had an exhibit entitled “Go Vegan!” in a former butchery, will serve a vegan menu, while Jackson will focus on preserved foods intended for times of hardship and nomadic existence. 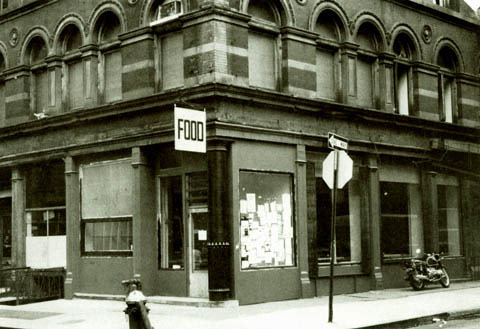 FOOD was remarkably prescient in many aspects. It oversaw the communal meal as art before Rirkrit Tiravanija’s curries, and served tasting menus and locally sourced ingredients before bone marrow was considered a delectable. It also fomented a certain artistic spirit and image that was arguably a harbinger of the "creative class"-driven economy that has now saturated New York, even though it’s doubtful that the founders intended FOOD as a prototype of the artist-as-forerunner model of gentrification. In this sense Frieze’s tribute to FOOD is perhaps apt in more ways than envisioned, the changes in the art world wrought by the fair economy echoing the urban overhaul undergone in New York...

It’s hard to begrudge paying FOOD some due, especially considering Goodden and Girouard’s involvement at the fair. Still, given the quasi-anarchic and communal quality of the original FOOD, there’s something potentially souring in Frieze’s tribute. Does FOOD lose too much of its meaning in such a rarefied environment or is the art fair the most ideal setting for this kind of reenactment? To take Matta-Clark’s own words on his work: “I have chosen not isolation from the social conditions, but to deal directly with social conditions whether by physical implication, as in most of my building works, or through more direct community involvement, which is how I want to see the work develop in the future.” Will the spirit of Matta-Clark’s pioneering effort be degraded or renewed by the corporation that is behind it? One will have to wait to see. Fortunately, such opinions can be made with a mouthful of food.