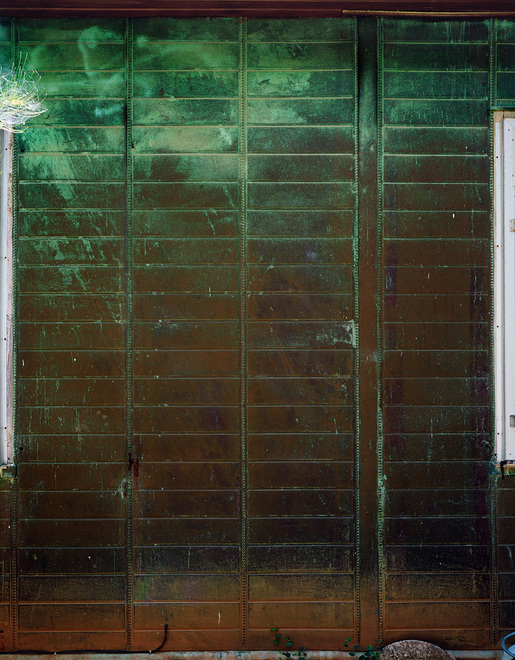 Domestica Dentata: A Tyranny of Details

Daniel Bauer’s photographs are hard to write about. His images are not easily encapsulated by description. I can more easily relate the experience of viewing them, which is slow and contemplative, or, in Michael Fried’s terminology, absorptive. These are self-contained worlds wholly manifest in every moment, in every detail, yet they also take time––the duration of exposure and the duration of viewing. I could say Bauer employs a modernist sensibility, in the sense that he explores and exploits photography’s most essential bases as a medium: light and temporality. He is a master craftsman in controlling both, paying meticulous attention throughout his process to detail rendered in the deepest shadows, from film exposure to digitization to printing. His prints are mounted to Dibond––the gold standard for mounting––and exhibited naked, with neither glass nor lamination for protection. Materiality and process are integral to the images themselves. Bauer wants you to see the details, not to obfuscate them with a mediating surface, however vulnerable this choice renders the prints.

The title of the exhibition is at odds with the vulnerability on display: Domestica Dentata, domesticated teeth. What sharp edges are latent within these images and the spaces they depict? We see six photographs loosely forming three pairs: a bright street in daylight and a street photographed at night; the surface of a decorated paper bag and the surface of a copper building; a dark room in which only reflective surfaces are visible, illuminated by a window, and a blue room that, despite its brightness, appears to be lit only by the doorway where the camera is positioned. These images are not aggressive. Rather, the long exposures––minutes to hours long––are slow and reluctant revelations printed in large scale. Movement is blurred into oblivion, blotting out any vehicles and pedestrians to leave only the stillness of architecture and objects juxtaposed with the rustling of leaves and the gradual shift of shadows. 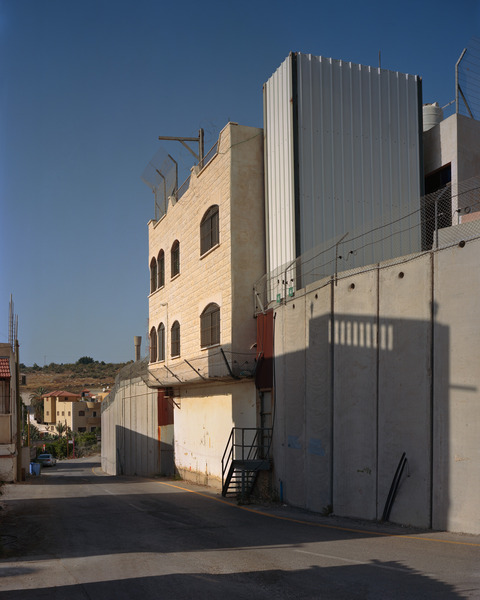 A long exposure. Not a decisive moment, but a latent image attempting to bridge a decisive absence. In long exposures ghost images occur. Appearing and disappearing but never static. Never in the present. An absent body’s movement across the frame. Dodging and burning. A tyranny of details. Are my details your details?

Decidedly not. Although based in Chicago for several years, Bauer is photographing in familiar territory for him, Israel, where he used to live and where he frequently makes work. Sometimes he revisits the same sites or structures over a span of time to expose, literally and figuratively, histories latent in architectural space: adaptations, demolitions, renovations, and additions to a building attest to changing times as much as the original structure speaks of its own time. Can history be understood through its physical remnants?

KupferDistanz (pictured at top) is the only exhibited image from a series depicting the facades of prefabricated copper houses still remaining in Israel, which were imported from Germany in the 1930s. Rather than showing the entire building, Bauer concentrates on close-ups of flat surfaces, capitalizing on photography’s propensity for recording details often unnoticed by human observation. Such intensity of mechanical observation and such a cropped view in KupferDistanz leave nothing but details, but the part stands in for the whole: shifts in color from copper to green indicate the passage of time, and peripherally visible materials of locally fabricated aluminum window casings covering the original, imported pine bear witness to particular histories of trade and migration. KupferDistanz translates from German as “copper distance,” but the distance in this close-up is one of time rather than space, conjuring Walter Benjamin’s concept of aura: “A strange weave of space and time: the unique appearance or semblance of distance, no matter how close it may be.” The series forms a palimpsest not only of social histories evinced by architecture but also of Bauer’s memories of successive visits to the sites and personal associations with the spaces. Your details are not my details.

Although only comprised of six images, the exhibition is worth taking time to contemplate. Bauer’s respect for photography––or perhaps his belief in photography––is refreshing. He seeks a little magic in this shadow play. He asks, “How underexposed can a photograph be before it dissolves into night? What insists upon registering itself in emulsion?” The usual photographic impulse to freeze a moment out of the flow of time in an act of preservation––perhaps a talisman against the inevitability of death––is absent here. The passage of time is instead embraced, and the impossible attempt to encompass history in a single photograph becomes a gesture rendered poetic by its inevitable failure: “A paradox: the same century invented History and Photography.” Herein lie the domestica dentata.