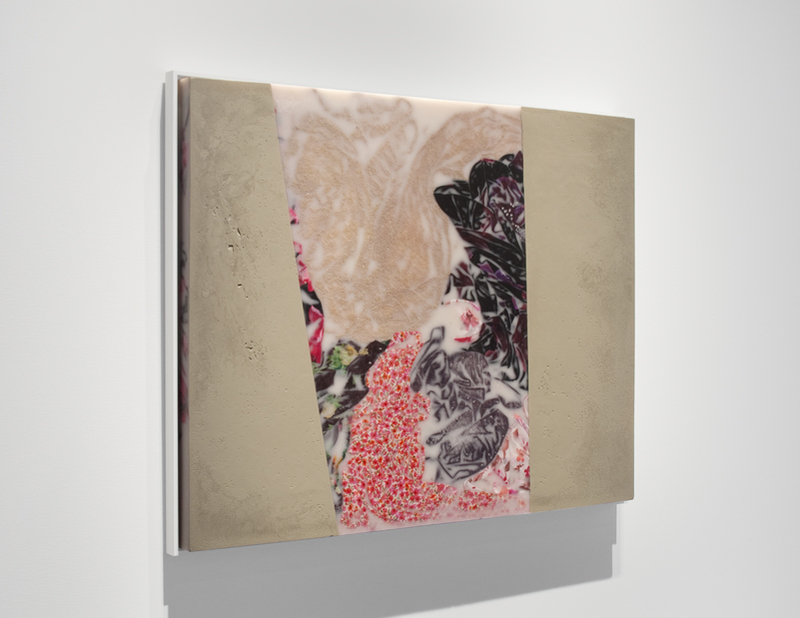 A Portrait of Obsession

To encounter Iris Häussler’s sculptures in a white box gallery is a rarity, as the artist’s work is usually found in immersive site-specific installations involving fictive narratives and incredibly detailed staging. On view at Daniel Faria Gallery is something of a retrospective grouping of the artist’s concept drawings, along with the sculptures she created under the auspices of various fictional characters: Mary O’Shea, Joseph Wagenbach, and Ted Wilson. Now Iris Häussler “invites” us to view these works “as works of her own.” Most press releases for gallery shows don’t have to specifically indicate this condition. But she’s not a typical artist.

I had the privilege of meeting Häussler two years ago when I interviewed her for ArtSlant, and even then the boundaries between fact and fiction seemed to me quite blurred. In retrospect I think I wanted to believe, wanted to be caught up in the story, or at least wanted to replicate that feeling somehow for the reader. I wanted a madcap story followed by a slow reveal.

Häussler made a big impact in Toronto with He Named Her Amber (2008-2010), an elaborate installation-cum-archaeological dig presented at the Grange House, an historic mansion in downtown Toronto attached to the Art Gallery Ontario. Häussler took advantage of the Grange’s historic surroundings to present the story of one Mary O’Shea, an Irish immigrant servant with a penchant for encasing objects in wax and clay and stashing these artifacts in hidden spots throughout the house. The visitor was guided through this narrative and the constructed archeological site by a volunteer tour guide, who willingly delivered this fiction with no caveat or disclaimer. The audience was unaware that even by crossing the threshold into the 18th century house they hadn’t in actuality left behind the “contemporary art zone” in the spacious Gehry-designed atrium of the AGO. The disclosure came only much later, after they had been swept up in the emotional intrigue, the curious objects, the story of the passionate researcher. Some people felt “duped” by the experience. Others found it magical. 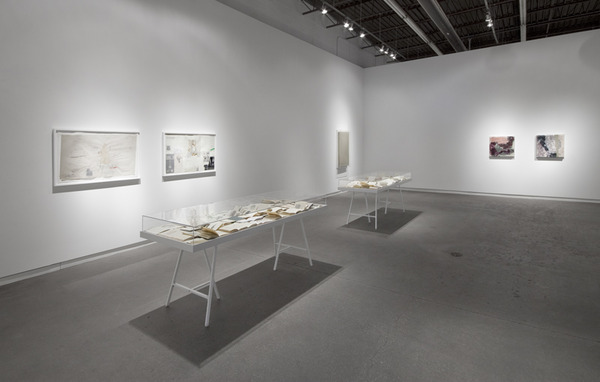 The fiction of Mary O’Shea and the Grange excavation was not, however, airtight—there were clues, holes in the story. The artist, hidden in the wings, in a way wanted to be discovered. Sure there are still probably some people out there who for some reason didn’t hear the revelation that their experience had been one of contemporary art, not of history, and still wonder about the mad maid Mary O’Shea and her waxen reliquaries hidden away in the old house. But that’s okay too.

Now Mary O’Shea’s artifacts are displayed among those of Joseph Wagenbach—a reclusive and obsessive sculptor (The Legacy of Joseph Wagenbach, 2006)—and Ted Wilson—a lovesick Australian ranger who crafted sculptures of beeswax and then mysteriously disappeared (He Dreamed Overtime, 2012 Sydney Biennale)—as well as those of Iris Häussler herself, the German-Canadian artist. Together they form an oeuvre. In this grouping, perhaps more than ever before, we can really examine the material and thematic concerns that have informed Häussler’s work.

Wax is a recurring material. One of the earliest works on display here, Lost Gaze (1999), is a large waxen tablet, created without moniker or elaborate narrative, that encases an abandoned curtain. Three new works of wax, fabric, and metal (all dated 2013) reprise this work, with various colorful items of what looks to be intimate clothing, sun dresses, or domestic fabrics like linens and curtains. These formerly soft and delicate fabrics here are captured in wax, held suspended in time and form, but also rendered useless, functionless. The impulse to preserve, and simultaneously to render useless, manifests itself in the creations of her various characters: a man who obsessively encases canned food in lead to protect it from radiation but effectively poisoning it (ou topos – a Synthetic Memory [1988-89]); Mary O’Shea dipping precious letters in wax, making them illegible; the wax sculptures of Ted Wilson in which were concealed necklaces and rings belonging to his lost love, Nelly. In each case, some form of a loss is manifested in an obsessive mentality, compulsive object making, in ritual concealing, in a kind of mournful burial—objects so precious they must be hidden from view in order to ensure their “safety.”

Joseph Wagenbach is perhaps a different story, because Wagenbach is an artist. (He is consciously creating works of art, rather than compulsively making objects that could be deemed art. The obsession is nevertheless there—in the site-specific installation held at 105 Robinson Street, his many towering clay sculptures resulted in a perilous living arrangement for such a modest dwelling.) Here in this spacious, tender and evocative grouping of Wagenbach’s sculptures, I see the encounter with material, the almost primal urge to sculpt and form, the sensuous pleasure of it all. In our interview, Häussler related to me a formative experience of encountering a thirty-ton mountain of clay during her art school days, and fully engaging with this raw material—I see this engagement present in Wagenbach’s works. 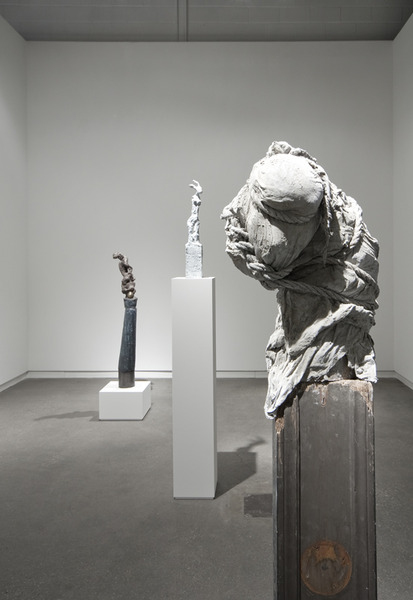 Häussler’s hyper-realistic installations belong among her contemporaries like Christoph Büchel, Dragset & Elmgreen, and others, yet where Häussler’s practice seems to diverge is in her total absorption in and almost literary sense of her characters. Her installations are not merely meant to impress us with their true-to-life details and immaculate staging, they inspire us with stories of human drama, the characters’ pain, loss, trauma, and torment. The stories crawl under your skin and stay there. These objects communicate that in their uncanniness, their alien familiarity.

Her characters are almost always marginal figures living hermetic lives: the recluse, the paranoiac, the superstitious servant, the immigrant, the outsider. Their actions are carried out with a sense of purpose known only to themselves, and witnessed by no one. Häussler remarks on this:

“[In] the most intimate space, their apartment, they carry out their self-assigned work almost monotonously, a work that demands time and creates nothing of commercial value, a work that appears to stand outside of time and society. What happens inside a person who lives this way? What makes him go on? What is behind the constant repetition of an act and the constant confirmation of a thought?”[1]

Häussler’s work deals with issues of value and recognition, of the marginal and liminal, of trauma and coping. Yet in many ways the statement above could apply to the work of any artist. Why make a painting? Why this drive to create functionless objects? It’s clear that this obsession is not merely the territory of the outsider, the maniac. Remove the constructs of the art market, academia, the social life of art, those aspects that reinforce and validate our actions; introduce the element of isolation; and in a sense we’re all outsiders and maniacs.