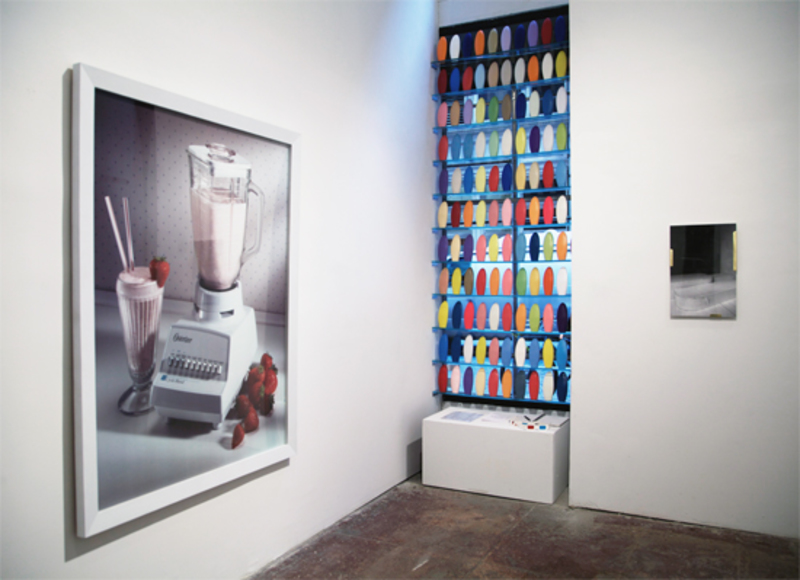 The Promise of the Image

Every product suggests itself first as an imagistic extension of one’s body and mind: consuming, being clothed, experiencing a situation, being enhanced, or encountering pleasure. Even an ergonomically designed shampoo bottle is the anthropomorphic picture of an imagined hand. Critical viewers typically regard such representations with conscious skepticism and probably as often with unconscious approval. “The Pathos of Things,” at Carriage Trade, puts such contradictions under scrutiny. The show is studious about the portrayal of objects as images, eschewing spectacle and focusing on the way that viewers absorb products first as visual promises.

Curator Peter Scott asserts that we only consciously confront the disparity between ourselves and the ego ideal that consumer goods provide after those products have failed us. We imbibe their illusive rhetoric as much as we do the commodities themselves, a fact emphasized by three works in the show that trade explicitly in hallucinatory imagery: a sculpture by Antoine Catala and two anaglyph inkjet paintings by João Enxuto and Erica Love. Enxuto and Love’s paintings are viewable with cyan and magenta 3D glasses, which make the ornately framed paintings they depict appear to project from the surface of the canvas. Each bears the image of an unknown masterpiece found on Google Art Project, a service that allows users to virtually tour museums around the world. Those artworks that Google doesn’t have the right to reproduce are blurred out, so despite the incredible dimensional detail of both reproductions, the paintings are effaced, pixelated. Enxuto and Love’s paintings inhibit the perception of the images they reproduce.

Lewis Stein’s 1991 Cibachrome print, Untitled (#2 from "Consumer Products Series"), is a mock stock photograph of an Oster brand blender, presented in large scale on a picture-perfect countertop with strawberries and a bright pink milkshake. Without an advertiser’s text, Stein’s photograph points less to the blender that is its formal centerpiece, and more to the amorphous sense of fulfillment the machine is equipped to provide.

Probably the most delightful work in the show is Fischli and Weiss’s 1987 film The Way Things Go. It shows the complicated and pointless workings of a warehouse-sized Rube Goldberg machine made with household goods that variously roll, launch, spill, or climb their way through the space. Like the rest of “Pathos,” Fishli and Weiss’s film doesn’t rely on consumer spectacle—it doesn’t patronize or mystify. It slowly unfolds in fits of goofy explosions, the objects strained beyond their conventional functions. 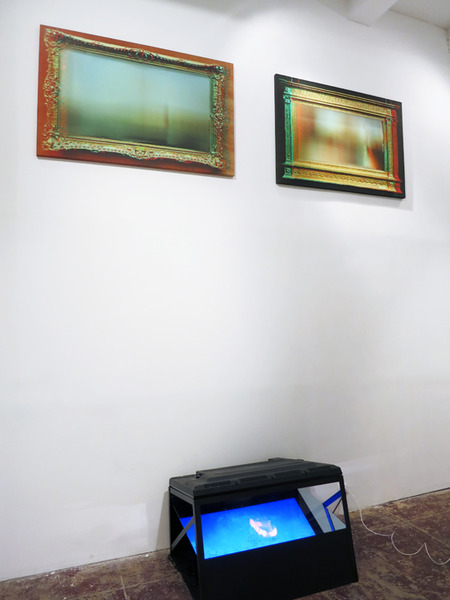 Three haunting black and white photographs by Katarina Elven are severe reminders of the kind of shock we experience, individually and socially, when products break. Elven’s pictures document abandoned boutiques and storefronts—palimpsests of a once-delirious market in the midst of a traumatic “correction,” circa 2011. Hung between other pieces in the exhibition, they punctuate the show’s exuberance and keep present the potential danger of unconsidered consumption. Conceived as a recession-era exhibition, “Pathos” unpacks the mistake of confusing objects with their image, and reminds us that we’ll have to live with the consequences of expecting all that an image has to promise.