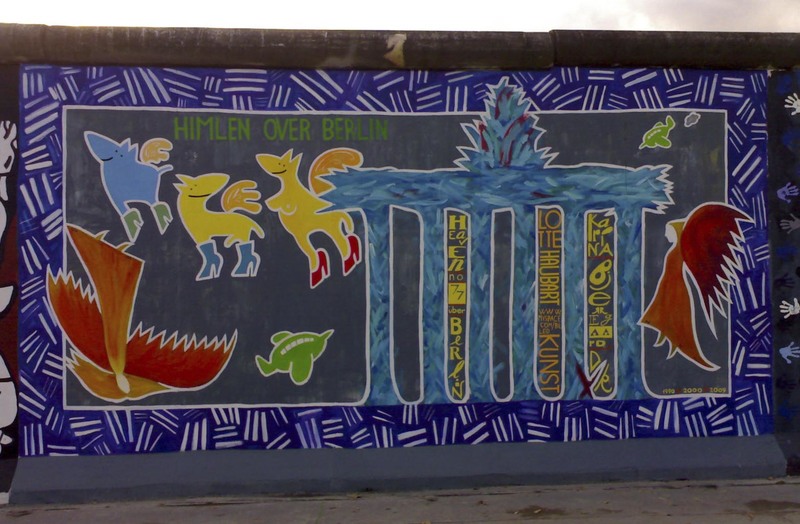 The Art of the Wall and the Spirit of Berlin

There’s been a lot of talk this week about the current state of the East Side Gallery. Thousands of people, including myself, have expressed their outrage at the city of Berlin and the profit-driven property developers for carelessly dismantling one of the city’s most treasured landmarks. (A current petition on change.org holds over 70,000 signatures.) “It’s a part of history!” we shout. “No more expensive housing!” we plea. Up to this point, the protests and arguments have centered on the Wall as historical artifact and its recent commodification as a site for potential luxury condominiums. Yes, that’s right. They’re tearing it down to put up a parking lot.

These condominiums are slated to be built on the former Todesstreifen. The “Death Strip” is an area next to the wall where border guards were given shoot-to-kill orders regarding those attempting to flee the DDR. The East Side Gallery undoubtedly serves as a critical memorial to the Cold War and its casualties – but what about its function as public sculpture? What of its importance as a site worth saving for generations that do not know of the Wall’s original intent? How is this work any different from the art-historical importance of the Caves of Lascaux or the collective memorial of Ground Zero in New York? The open-air gallery, possibly the largest of its kind in the world, showcases the tireless efforts of artists from across the globe. These artists came together to transform a symbol of oppression into a universal bastion of hope in a freshly reunified Germany. The Gallery is more than just a memorial; it is an invaluable work of public art that deserves to be preserved as an icon of human resilience. 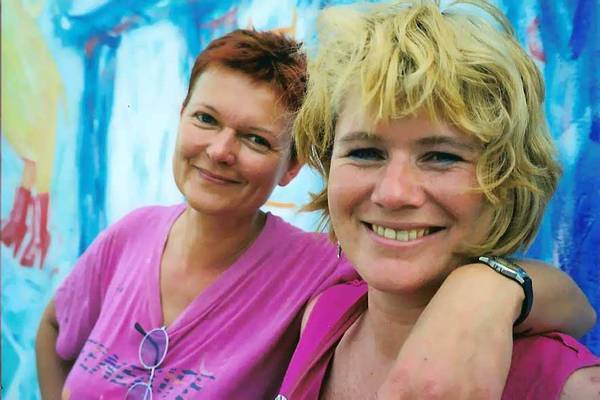 I spoke on the phone this week with the Danish artist whose painting has already been partially removed from the Gallery. I had a difficult time finding her. The sliver of concrete that has already been removed from the Wall is the only piece of the painting with her name on it. None of the articles I have seen circulating in the German press have mentioned her at all. The volunteer “security guard”, stationed to prevent further destruction to the Gallery, did not seem to be familiar with her either. It appears the identity of the artist(s) and the specific work(s) is of no concern, which I find to be a piece of the conversation that is sorely missing. Karina Bjerregaard is her name and she, along with her collaborator, Lotte Haubart, produced the painting Himlen Over Berlin in 1990 next to 103 of their fellow artists-in-arms. There is powerful force in the action of painting over history to make new, rather than tearing it down, and I could hear it in her voice as she described her relationship to the Gallery and this work over the years.

We spoke about the fragility of public works – both from vandals that write graffiti on its surfaces to shortsighted public officials threatening its preservation. "In 2009 we went down to restore the painting for the 20th anniversary commemoration. I vividly remember Klaus Wowereit (the Mayor of Berlin) giving a very moving speech on the importance of this work. He said that we must never forget how happy it made us in the 90s and we must ensure its continuation into the future. Five years later and he's involved in its destruction. Isn't that ironic?"

Our conversation wandered to the topic of Berlin itself and what it was like after reunification: “There was an energy to the city that I had never felt anywhere before. The [Berlin] underground felt like it opened up to everyone.” We spoke about how she took a train from Copenhagen to Berlin without speaking to anyone involved with the project. Her participation arose when a Danish reporter had mentioned that there was no current representation from Denmark in the team of artists working on the project. Bjerregaard and Haubart were bent on changing that and arrived at the Wall with their paintbrushes in hand, were given a spot, and started to work. “That’s how it was back then. It was a very Berlin way of doing things,” she recounted as our long-distance cellular connection crackled. “There was no internet, no cellphones. If you wanted to do something you just showed up. We spoke to a woman and told her what we wanted to do. She liked it and said, ‘Here’s a piece of wall. This is yours.’” This sentiment and sense of camaraderie has been an undeniable driving force in Berlin for the last two decades. It is arguably the main reason the city has flourished into an international community of artists and creatives today. 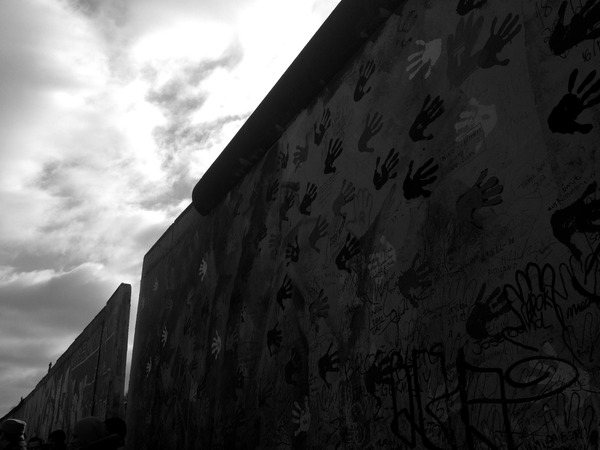 The paintings on the East Side Gallery are more than just decoration or a brightly hued tourist attraction. They deftly represent one of the many valuable functions of Art and its necessity to the human experience: these paintings possess the ability to transcend fear and oppression, to make whole again through emotional, visual communication. They are markers in time that memorialize not only the hardships of a divided nation, but more importantly the moment of human coalescence in triumph through art. Tearing down the Gallery to make way for luxury commerce will destroy more than cultural history, it will cut a hole in the spirit of Berlin and its artistic community.

[Image on top: Karina Bjerregaard and Lotte Haubart, Himlen Over Berlin, 1990 (image of intact painting from 2009), East Side Gallery; Courtesy of the artists.]

The Shipwreck and the Beehive: A Sculpture Park Claims a Space for Itself, and Others Group Exhibition
5/13/16

In Chelsea, Staring Through People's Windows to Look at Art
4/19/16

Mural Artist Killed in Oakland
9/30/15
COMMENTS (1)
Great article. What you had to say about art's importance is particularly poignant. Quoted you at http://artistsonthelam.blogspot.com/2013/03/not-about-armory-show-we-are-all-jelly.html I really hope the Gallery can be left as is. Cheers, Jenny Lam
Comment by: Jenny Lam on Tuesday 03/12/13 at 1:36 AM
ArtSlant has shutdown. The website is currently running in a view-only mode to allow archiving of the content.