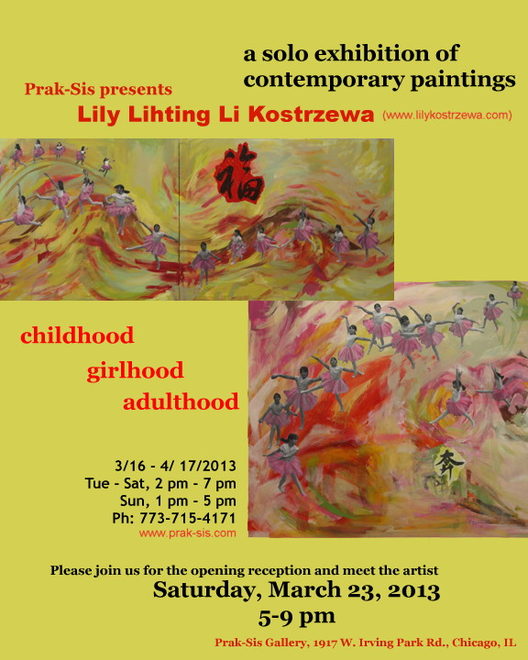 “For any artist, the most critical strokes upon the canvas are the introductory ones, which shape and define the skeletal structure that the details of refinement are hung upon, often determining the success, strength, or weakness of one's artistic vision… The artwork of Mt. Pleasant, Michigan based artist Lily (Lihting Li) Kostrzewa is as compelling and confrontational thematically as it is soothing and spiritual visually. Lily's technique is one that employs a vivid use of color delicately mutated into soft expressionistic tapestries of allusion - similar to the sensation one gets when looking at a single leaf hanging upon a tree while all the other leaves around it dissolve into a kaleidoscope of imagery fading into infinity. Born in Taiwan, after studying art and living 25 years in Taiwan, Lily moved to the United States, earning her MFA degree in Modern painting.  The balance that Lily brings to exploring the cultural contradictions between East & West through her artwork is as ageless as it is contemporary, relying upon Eastern philosophy and especially the notion of how much of life is about bringing opposing forces - strength & weakness, principle versus amorality - into a unified vision that is universal.” (Review Magazine issue 746, Robert Martin, 2012)

With many of her newest and more groundbreaking works will be on display at Prak-Sis Gallery at 1917 W. Irving Park Rd. on Chicago’s Lincoln circle  are her solo exhibition titled “childhood, girlhood, adulthood”, which runs from March 16 through April 17 with a reception on Saturday March 23, 5pm to 9pm.

Since the age of nine Lily has dreamed of becoming an artist after one day saw some Cezanne paintings in one of her father's magazines. Three years later her parents sent her to study Chinese art under a Chinese Master. By the age of sixteen, her work had won national awards and was in a collection for the Sun Yat-sen Memorial Hall in Taipei. At the same time, she began learning oil painting. With four years of art study at the National Taiwan Normal University, where she studied under many Chinese master artists who have pioneered their techniques from both the traditional Chinese paintings and European art, latter she developed a blend of Eastern artistic elements of rice paper, bamboo brushes ink, with colorful Western expressionistic renderings of subjects like the human figures, painted on wood panels or canvas with acrylics.

Lily’s interest in developing this style of merging cultural & artistic influences first began with her focused study of Chinese art. “Chinese art is based upon a philosophy of Zen that employs a lot of delicacy and use of ink and watercolor. When I came to America and started studying Pop Art and German Expressionism, it inspired me to work more with color. The longer that I lived in America I gradually felt that my identity was not really Chinese nor was it American, so this led me to question who I am and how can I make my art unique?” (Review Magazine issue 746, Robert Martin, 2012)

After living in America for more than 20 years, her artistic search has focused on how to bridge the two cultures and bring them together so that East & West can merge. She feels that she has been privileged to be in both cultures and learn so much, she has started merging them gradually through many of her theme works, such about life’s journey and women’s issues. However, Lily tries to be provocative in both ways to challenge viewers to experience social issues cross culturally without giving up balance and harmony. She hopes by giving viewers the cross-cultural experience to bring them the sensibilities of their inner child. In the series of “childhood, girlhood, adulthood” she tells people her life stories but everybody will interpret differently. To learn more about Lily and her work, visit her website at www.LilyKostrzewa.com .

Posted by Lily Kostrzewa on 3/4/13
RELATED ARTICLES
COMMENTS (0)
ArtSlant has shutdown. The website is currently running in a view-only mode to allow archiving of the content.