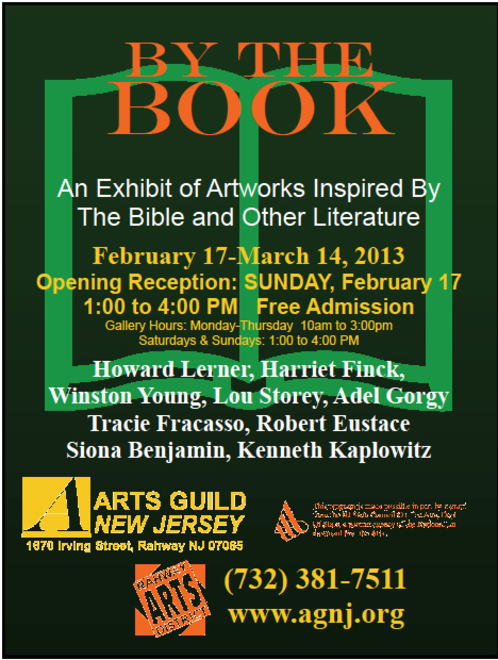 By The Book – Looking at Words -- Review by Mary Gregory

It has been said that a picture is worth a thousand words, but words can also create images.  In the powerful new exhibition, “By the Book” at the Arts Guild New Jersey in Rahway, words have been the inspiration for visual works of art.   Curator Lawrence Cappiello has brought together a varied, colorful and fascinating collection of works for an intriguing look at how literature and the Bible have inspired and informed nine contemporary artists.

As Cappiello states in the exhibition essay, “in earlier ages, the point of the great artworks was intended to illustrate stories and instruct the people about their literary source---the Bible.  In later years the inspiration of the Bible and in other cases, plays or poetry was often to create a visual image corresponding to the ideas in the source material, while not serving as mere illustration of the source materials.”

The joining of the visual arts with the written word is as old as mankind.  In the earliest extant documents of human life—cave illustrations—pictures are stories, stories recorded in the only written form available.

Since then, text and art have enjoyed a long and successful marriage, reaching unimaginable heights of glory in Egyptian hieroglyphs, Buddhist Zenga scroll paintings, South Asian miniatures, and Medieval manuscript illuminations.  The marriage continues to bring forth brilliant offspring.  Paul Klee wrote poetry; e. e. cummings painted, and it would be difficult to find a serious artist or writer whose work has not been deeply influenced by the other genre.  Cappiello, has in fact, examined the subject with previous exhibitions at the Arts Guild, including 2010’s “Text/Image.”

In “By the Book” the focus is narrowed, to some extent, focusing largely on works of art inspired by the Bible or sacred texts, a combination which has given us, over the years, some of the most moving and important examples of this type of collaboration.  From Renaissance cathedrals and chapels, decorated with scenes from the Gospels, to the poem paintings of Zen monks, art has often taken the place of the written word for illiterate but faithful believers.

These nine artists, however, are quite literate, and words have been an important source in these works. 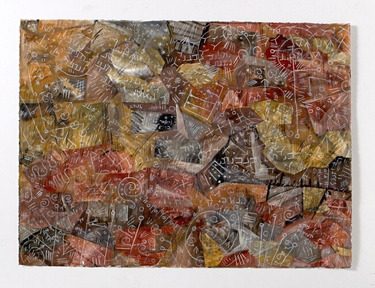 Harriet Finck embeds Hebrew letters and words from certain Old Testament stories into her dense, multi-faceted collages.  Words or snippets of text combine with her own gestural strokes, floating on the surface or peeking from beneath layers of paper to form a delicately fractured, yet cohesive and elegant image, as in “Sarah’s Life” and “Jacob’s Ladder V.”

Adel Gorgy’s compelling large format color photographs, whose titles are inspired by the poetry of the 14th century mystic philosopher, Rumi, are vibrant, complex compositions taken and recomposed from the work of renowned artists.  Gorgy’s work has been likened by critics to “Lee Krasner cutting up her life study drawings to make new abstractions,” and in the selections presented here, he creates new compositions that challenge the viewer to see familiar work with new eyes.  A section of a Van Gogh portrait becomes a mystical universe of white in “Realm of the Spirit;” El Greco’s brushstrokes explode into spinning worlds in “The Moment Light Begins;” a Pissarro landscape is transformed into a dense, textured color-field abstraction in “The Mystery Does Not Get Clearer;” and Matisse’s “Odalisque” becomes a garden of sumptuous color in “A Hundred Veils Fall.”  The compositions are the artist’s own creation, his medium being other artworks.  Similarly, in his powerful black and white imagery, he focuses on one aspect of an earlier artists work so intensely that it becomes his own statement, while at the same time giving the original artist a new voice.

Siona Benjamin’s impressive 15-foot long scroll tells many stories, perhaps most interestingly, the artist’s own.  She enjoys a rich and varied cultural and religious heritage and brings multiple traditions mixed with pop cultural elements into play in her meticulously painted and composed “The Scroll of Esther.”  It is impossible to view this piece and not question notions of race, religion, gender, history, myth and tradition.  So many disparate forces and energies are combined into one beautifully transformed and transforming whole.  If the artist can blossom with so many contradictory and supposedly conflicting elements, can’t humanity, as well?

Winston Young’s delicate and precise pen and ink drawings are inspired by Old Masters of the Northern and Southern Renaissance.  “St. George and the Dragon,” “David and Goliath,” and “Ode to Martin Schongauer” evince inspiration from the Bible, the work of masters like Schongauer and Durer and, at the same time, bring a flavor of contemporary music, film and games.

Kenneth Kaplowitz is represented by a series of 4 x 6 inch black and white archival pigment prints.  In them, he presents images based on stories such as “Pharaoh’s Daughter Finds Moses,”  “Isaac Blesses Jacob,” and “Samson’s Haircut,” in a style that brings to mind elements as varied as Iznik tiles, Kara Walker’s cut-paper silhouettes, and M.C. Escher. 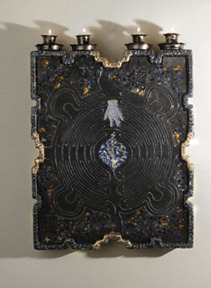 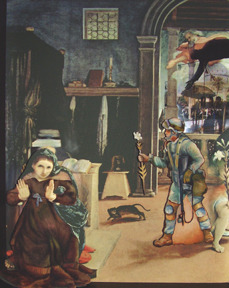 Tracie Fracasso combines imagery from Renaissance and Old Master works with her own figurative paintings to create multi-dimensional images conveying ideas about history, religion, art and feminism.  Her picture-boxes such as “The Annunciation” and “Flagellation” combine reproductions of earlier works with her own painting in a format reminiscent of pop-up books.  In them, she tells a story of what was—and perhaps, instead, what could and should be.

Lou Storey’s bright, colorful paintings with mixed media objects (like plastic letters and shapes) have the feel of game boards— like psychedelic Chutes and Ladders, where crooked roads and spinning wheels lead from one idea to another. They are based on and titled for writings of esteemed psychologists and psychiatrists and are filled with enigmatic yet often encouraging arrangements of words placed against energetic fields of color and pattern.

Howard Lerner has created a series of constructions, containing old signage, found items, hand lettered scrolls and carved panels which combine to form whimsical objects that are at the same time strangely familiar and completely foreign.  We have all seen things similar to them, or at least to their parts, but never seen anything like them, when put together.  His “Ark of the Covenant” at six feet high by almost seven feet long has the feel of part carnival, part religious object, part outsider art—in a unique blend of spirituality and humor.

In “By the Book” Lawrence Cappiello has gathered together an accomplished group of artists who are all looking at and considering the many ways in which the Bible and literature inspire and inform their work.  Interestingly and refreshingly, each work shows a remarkable artistic commitment.  Every piece in “By the Book” acquires some of its power from the incredible amount of labor taken to produce it—a true rarity in contemporary art shows.

The exhibition is complemented by an elegant illustrated catalogue with an essay by the curator, and runs through March 14, 2013 at Arts Guild New Jersey.

Posted by M Gorgy on 2/21/13
RELATED ARTICLES
COMMENTS (0)
ArtSlant has shutdown. The website is currently running in a view-only mode to allow archiving of the content.