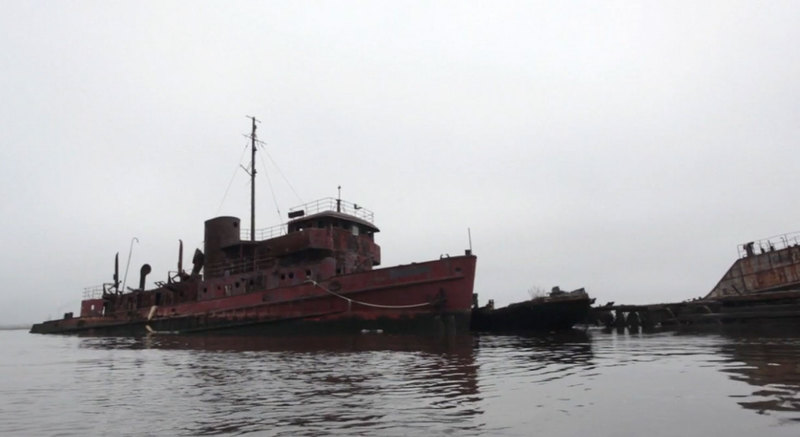 At Pierogi, Canadian photographer and video artist Isabelle Hayeur offers Death in Absentia, a series of evocative photographs that capture the rapid transformations that man and industry have on aquatic landscapes in south Florida. She documents the extreme pollution and makes sense of contamination by employing a gauzy effect that blurs the imagery of water into color fields.

Inspired by time-lapsed changes of the rivers and streams in her hometown of Montreal, Hayeur used a residency in the watery terrain of south Florida to focus not on the beauty of the tropical waters, but instead heavily polluted navigation canals. Frequented by industrial barges and trash boats, the canals have become a floating landfill rather than a source of life and vegetation. Industry contaminants literally choke the life out the water, blocking oxygen and rendering it unable to support life. 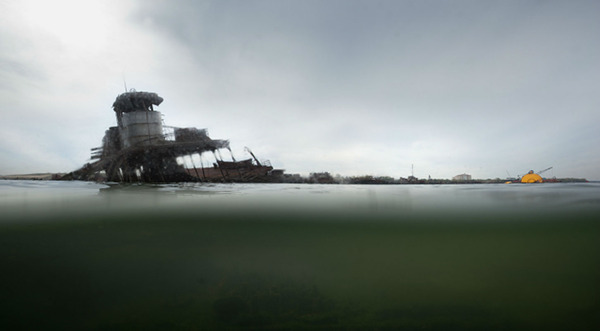 With the desolation of these strained ecosystems as guidance, Hayeur throws the viewer head first into the murky waterscapes. She utilizes a deliberate perspective that is partially submerged, letting the viewer imagine for a moment that they themselves are asphyxiating on the noxious liquid as they struggle to keep a head above the surface. In the virtual thick of it, the pollution can be seen at each depth of the watery wasteland, connecting riverbed to sky.

Yet despite the bleak reality of the compromised canals, Hayeur has the innate ability to render beauty from wreckage. Much like Edward Burtynsky’s majestic photographs of barren quarries, spent strip mining and industrial salvage, Hayeur lets the viewer forget, if not just for a moment, the dire hopelessness of the scene.

Before the eye can completely focus in on the specifics, the oversized pieces are initially encountered as cool color fields, whereby yellow-browns fuse languidly into greens and blues. The watery murk and slate skies are interrupted only by the steely grays of industrial barges and marine structures that exist in varying states of decay on the canal surface, pushed into a soft focus that betrays them for regal castles or fairy tale bridges that were forgotten over time.

But as the mind continues to wander through Hayeur’s cool and soft, it is also brought sharply back to attention with her simple choice of framing – mounting on aluminum over traditional mat and frame. Hayeur plucks this metallic element from her industrial narrative, and this decision firmly guides us back to the matter at hand – these waterscapes are not meant to be beautiful. Rather, they command our attention specifically to a relationship (and subsequent effects) in which industry has overwhelmed nature and taken over.