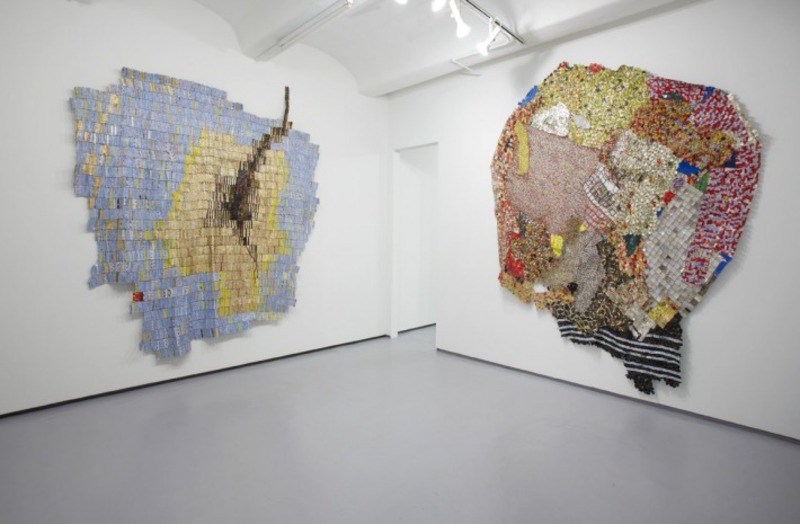 Ghananian sculptor El Anatsui works with a team of assistants in his Nsukka, Nigeria studio. The men make “blocks,” small patches of bottle caps that are eventually fused together to form Mr. Anatsui’s large-scale pieces. At various moments in the process, he gathers the assistants together to lay these blocks out on the floor in patterns; sometimes they rearrange them to create new shapes until Anatsui is satisfied. Before one of these flexible sculptures is completed, Mr. Anatsui will photograph the most favorable possibilities and study them, sometimes choosing to complete a sculpture as captured in the image. Other times, he is inspired to create something entirely new.

Throughout his more than forty-year career, El Anatsui has been pushing the definition of sculpture and its presentation. He works against the idea of sculpture as a fixed medium by creating changeable installations in ceramic, wood in different forms, metal, and most recently, discarded liquor bottle caps. Mr. Anatsui’s sculptures first captivated Western audiences during the 2007 Venice Biennale when he draped the façade of Palazzo Fortuny with these metal tapestries. 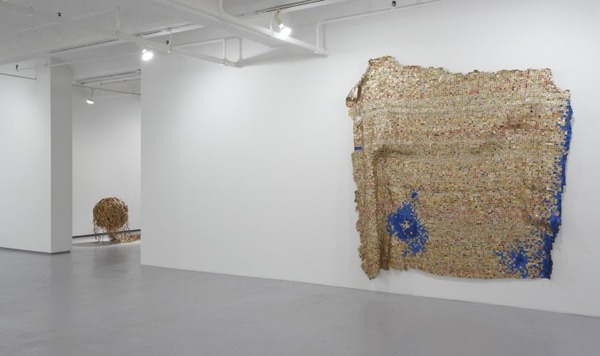 The pieces in “Pot of Wisdom,” his third solo exhibition at Jack Shainman, are similarly impressive­­­­—their size, intricacy, and pattern are absorbing. To fully comprehend their detail, one must gaze at a distance as well as scrutinize closely. It is only with close looking that one can understand how a dimpled bottle cap gives these forms a tenderness and grace. Standing at a distance and observing their scale underscores the order and unity that is created when hundreds of metal pieces are bound together with copper wire twist ties, or how artfully shaped-up aluminum can be transformed to resemble hand stamped and dyed cloth. By chance, the colors of the bottle caps mirror the traditional reds, blacks, and yellows of kente cloth, but Anatsui often resists references to textiles when describing these sculptures. For one to consider the pieces as mere tapestries might prevent a looking that reveals their meaning beyond tradition. Anatsui stopped calling these works “metal cloths” long ago—he never found learning about fiber arts very interesting—but it is difficult not to imagine these sculptures undulating and rustling in a breeze. 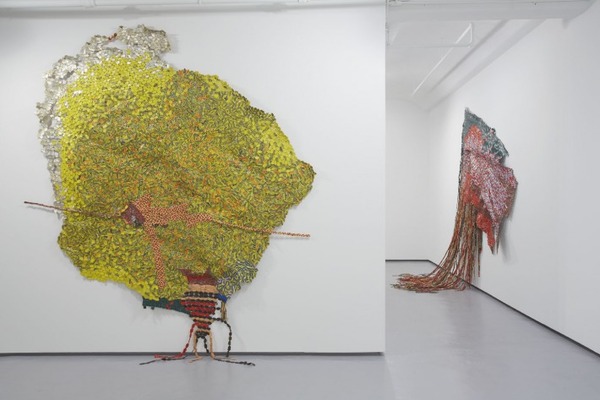 We might instead contextualize these pieces by referring to Frank Stella paintings or work by other modernist artists, but Anatsui has always insisted that abstraction, for him, is more about retention rather than release. During his studies at the College of Art, University of Science and Technology in Kumasi, Ghana (an offshoot of the famed Goldsmiths College of London), Mr. Anatsui surely learned that one principle of Abstract Expressionism is to elevate the freedom found in grand, spontaneous gestures. Later, he might have been taught that the Minimalism that followed focused on a controlled simplicity to communicate affect. Western ideas of abstraction seem to de-value any reference to the outside world, but I wonder if Anatsui wanted to test that theory. Can one really escape representations of the real? The dense, vibrant patterns and repurposed material of Mr. Anatsui’s sculptures not only allude to the very real legacy of colonialism in Africa (European traders bartered for slaves with liquor), but also refer to his belief that his art is a metaphor for the variability of life. When we look at art, we can’t help but dream. Anatsui’s bottle caps will never return to their bottles, but the shifting and morphing that occurs each time they are hung on a wall reveals new meaning in their flexible form.