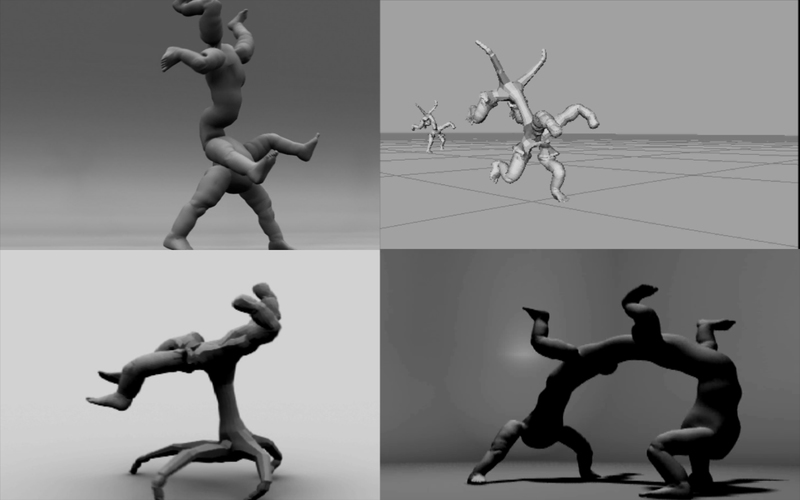 New York, Dec. 2012: Michael Rees is a New York artist. His first New York show at 303 opened in the early 90's. Then, as now, his work displays humor with a reflective conflation of the psychosomatic, the automatic source of language and its programmatic development. He has worked widely developing animation, sculpture, installation and interactive media. As of late his interest in the object grows through collaboration, humor and language examined through a collision of medias. Upcoming projects include a work for Out of Hand: Digital Fabrication in Art and Design at the Museum of Art and Design in New York. Bradley Rubenstein and Michael Rees were represented by Universal Concepts in New York and have collaborated on several projects and exhibitions together, most recently in an upcoming print edition through Rutgers University Print Department. This interview was conducted via email from March 2012 through December 2012. 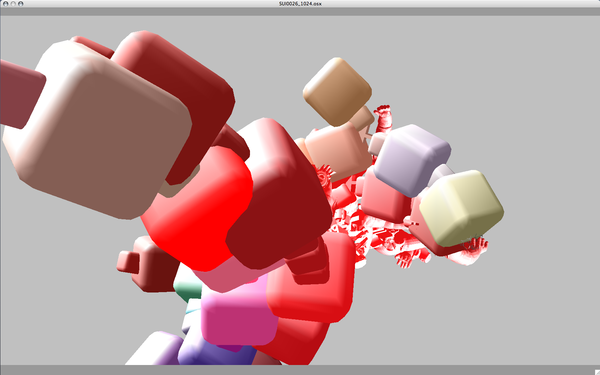 Bradley Rubenstein: Can you talk a little about the early pieces and how they have turned from performance to the rapid prototyped works and to where you are now?

Michael Rees: Yeah. Those early pieces (Studio Performance) are so open. The body in the earlier pieces becomes a locating force, whereas these newer works are further out; the body is only dimly available. These newer works are actions, continually evolving in some other space. They are performative. In a similar way, both projects are performative.

In Tactical Play Exchange, my collaborator Robert Gero and I both had done performance and its realization as object. This brought us to work together. Robert has a history of developing a philosophical framework for the peformative in an exhibition he curated in St. Louis called Performance and Performativity in Contemporary Art.

BR: In the past, your sculptures gave priority to the internalized, subjective representation of the body—a form of very subjective portraiture for lack of a better term—what might be seen as akin to Freud’s Imaginary Anatomy. You were following a line that started perhaps with Rodin or Giacometti. There was a real haptic quality to the work, which is interesting considering how it was generated in the no-space of the digital world, but one gets a sense that you weren’t simply distorting something already in existence, like, say, Francis Bacon would, but that these works exist because they were manifested by your process. Is that a fair assessment?

MR: I think there were a lot of contemporary influences as well: Burden's performances, Kiki Smith, Bob Gober, David Wojnarovic, Cindy Sherman, Matthew Barney, and so on. But for me, there is no doubt of a psychological reification in the act of making. It's not everyone's agenda, but it certainly was mine for a long time. That way of making continues from the Studio Performance photographs into the Ajña Skull 1, 2, and 3 from 1996–98. The Ajñas were actually pretty gory and grotesque—for example, the uterus in the skull—but they're mediated and represented in amber plastic accretion, laser-hardened goo, faceted impression. It's interesting that all of your examples belong to an older existential aesthetic. The newer works no longer partake of the gore, the slime, the choice. They are transformed. They are endless surfaces and endlessly pliable. This is our contemporary condition. Media representation in a real-time, 24-hour, 7-day, 24-time-zone world. There is no end nor beginning to anything. I think the older Imaginary Anatomy in my work is struggling with the newer mediated tendencies.

BR: Your work has been rather a frontier-like response to a very modern apprehension of reality as mediated through new concepts of understanding the “actual” world. I see it as related to psychology. How do you see it fitting in historically, as well as art historically?

MR: There are artists who are keenly aware of their project within an historical continuum. I am of a different sort. Although I have my precedents and my antecedents, more and more I tend to float things out there into the world to see what will happen. I think it’s a notable exercise to close your eyes and try to visualize your body—not the one you see in the mirror but the one you feel. It’s a strange concoction. As we become increasingly extended I think we identify less with the look of the body and more with the surface alterations of these concoctions. This still places me within the psychological. I didn't quite get the memo about the mediated control of experience. I keep looking for leaks, fissures, the edges where the utopian systems of representation break apart and new possibilities emerge. 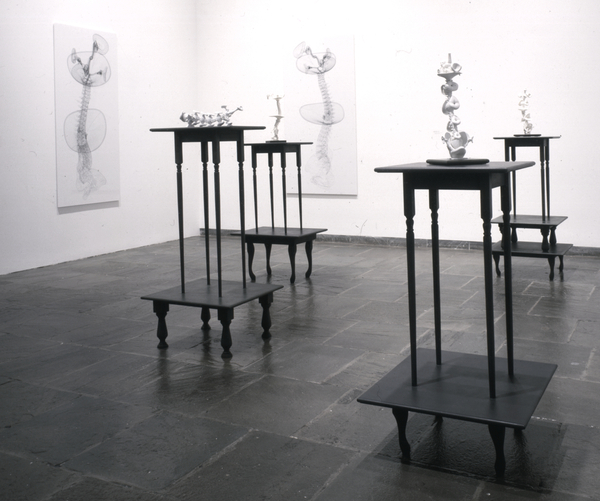 BR: There is a line of sculptural thinking too: Eva Hesse, Bruce Nauman, Joseph Beuys…

MR: I think as a younger artist these artists were of great concern to me. As I get older I think Nauman is the gift that keeps on giving. I think his early experience with math is way underplayed in the reception of his work. And of course he's there with the deep investigation of body space that so many people would pull from. But tactical play exchange keeps Gordon Matta Clark in mind. Ours is not an exterior space but more of a heterotopia. I feel the most kinship to him. When I saw his show at the Whitney, I think I was overcome by waves of nostalgia for New York in the seventies and eighties. Dangerous razor New York. So long gone.

BR: The collaborative process seems to have opened up a lot of doors for you. I get the feeling that it gave you license to go to places that you might have shied away from. Humor, for instance, plays a role to a great extent.

MR: Humor's new for me?!? My first show at 303 was chock full of jokes. There was Do Be Do Be Do actually based on that joke that "To be is to Do – Sartre, To Do is to Be – Camus, DoBeDoBeDo – Sinatra." Stud Study was dark and sexual and by extension funny. When people explained my work they often used the joke about the guy who goes to the psychiatrist and gets a Rorschach test. Viewing picture after picture he responds to the doctor, "That’s two people making love!" Every single one, he says that. Finally the doctor's diagnosis: "You're obsessed with sex!" Our patient exclaims, "Obsessed with sex?!? Hell! You're the one showing me the dirty pictures!"

A show I did in Houston in 2009 was self-curated by my humor response to the pieces. If they didn't crack me up somewhere along the way, they didn't make the show. Weirdly, but of course, the show ended up having a dark streak through it.

And with the current pieces, Robert and I watched Ernie Kovacs's YouTube videos as we were working. Enough said.

BR: Were there any influences that you can recognize, or precedents, for the collaboration? It seems like Martin Kippenberger and Albert Oehlen's back-and-forthing produced something similar—not an equivalent, just a similar tone in the sculptures they did in the eighties.

MR: It's funny, this kind of play has been around in so many places and ways, like Robert Morris sharing videos in the seventies, then of course Kippenberger, Oehlen, and so on. Tim Rollins and KOS. Andy Warhol and Basquiat. Lots of people play around with it at some point. I think I take my clues more from music in this regard for this project—dubbing and sampling, for example. But also the sense of working off one another. It's interesting to think of the virtual object as an expression of energy that you act on and that is always in play. It only becomes physical when you print it. Otherwise it's in a dormant state of energy, a strange artificial state.

Digital media gives the collaborative a flavor too. What is the material of the work? It's kind of immaterial material. It is low-hanging fruit to talk about the way computers have learned from biological systems—to talk of how the iterative and the generative have become part of everybody's process. What may have been probable and likely in video and sound for many years, we're just getting to in terms of objects because of the technologies. I've been working with sampled objects in 3D space since the Ajña series in the middle nineties—spines and so on—so it seemed to make sense to enlarge this.

Remember, too, that I've done a lot of collaborative work starting in the late nineties with my project Sculptural User Interface (SUI). I worked early on with Chris Burnett on the show Artificial Sculpture and then notably with Don Guarnieri on the interactive software installation Social Object: Sculpture and Software. Even so, many people have also contributed alphabets to the project and participated in exhibitions around it. Often the alphabets were developed in a back-and-forth way between artists. The SUI was firmly built on Beuys's idea of social sculpture but tweaked up with a retool of the ready-made made ready, synthesized from Kosuth, and fed through the digital machine in a kind of turntable, open-source assemblage.

I don't want to go all geek on you, but our practice of sharing models has a kind of transparency to it too—a total surveillance. As we further work the objects manually, after they become reified by rapid prototyping and CNC milling, this faithful print of the interaction between us becomes strained. At the end of our process we almost removed this transparency and began to have conversations upon and within conversations, noted and marked on the pieces—obsessive transparency, giving way to veiled convoluted activity. I think you feel this when you're in the work—the sense of the transitory, the shifting, the changing. Each piece or show is a frame of an animation. I think this is important. It starts to allow for the space of an individual in the machine but shielded from its panoptic gaze. 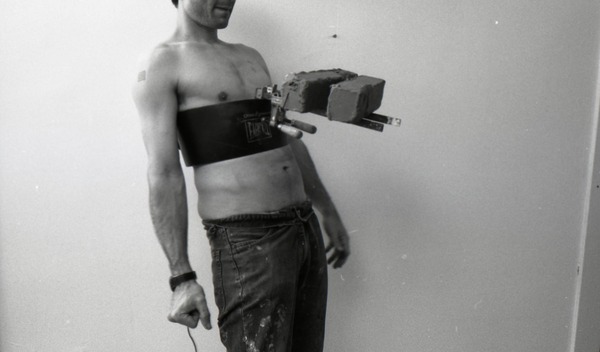 MR: Eeekk. I like Atemporality for Artists from Bruce Sterling. He's trying so hard to nail a new aesthetic, but I think he got close to something in that talk. We're in the extraverse where one thing is mashed with another and another, paradigms on each other; epochs present and lost and mapped to paradigms and so on. It's a mess. I guess I'd have to go with paradigms for the simple reason we can replay epochs at will.

MR: You'd think I'd be willing to be so binary, but I'm not. I feel both present in every aesthetic act—always unresolved and unresolvable. A kind of breath in and breath out (not unlike my project Um and Ah).

MR: You set up systems, brutal workflows, extensive labor, aesthetic machines, and the coolest thing to emerge is that serendipitous shit right there, some grotesque utterance.

ArtSlant would like to thank Michael Rees for his assistance in making this interview possible.

Posted by Bradley Rubenstein on 12/16/12
Tags: installation, video-art, performance, photography, digital, figurative
ArtSlant has shutdown. The website is currently running in a view-only mode to allow archiving of the content.