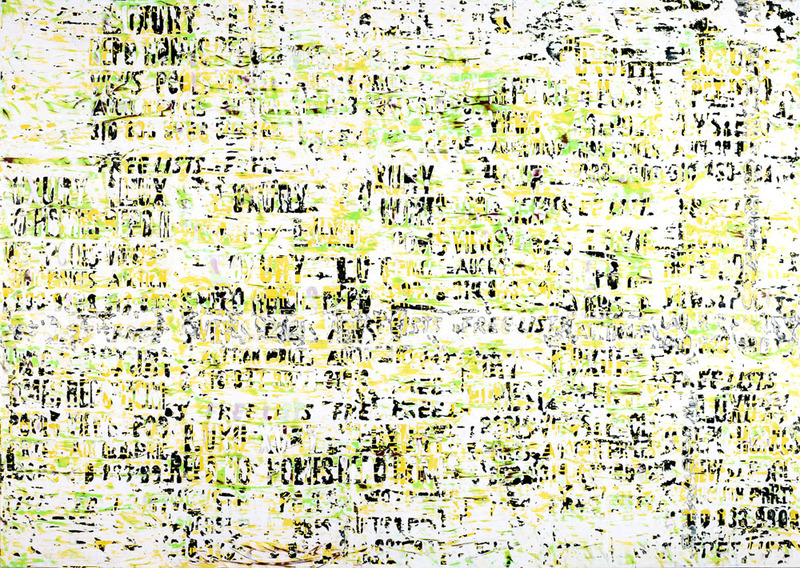 Looking at Mark Bradford’s work makes me happy. I am one of those critics who doesn’t normally find much interesting in painting, but Bradford’s work makes me want to think hard about it again. I saw his first mid-career survey at the ICA in Boston nearly two years ago, and I got a good sense of his oeuvre over the last fifteen years. Not much has changed with Bradford’s third solo exhibition at Sikkema Jenkins. All of the works on view are large-scale abstractions created from a variety of materials collected and scavenged from the Los Angeles locales he calls home. The end papers from his beautician days have disappeared, but the scraps of poster paper, advertisements for goods and services for the socially and economically disadvantaged in the city remain. Although he hasn’t ventured too far from this zone of familiarity, Bradford’s work remains fresh and appealing. In his efforts to re-imagine the possibilities of painting, perhaps Mr. Bradford realizes there is much more work to do and a few more questions to ask. 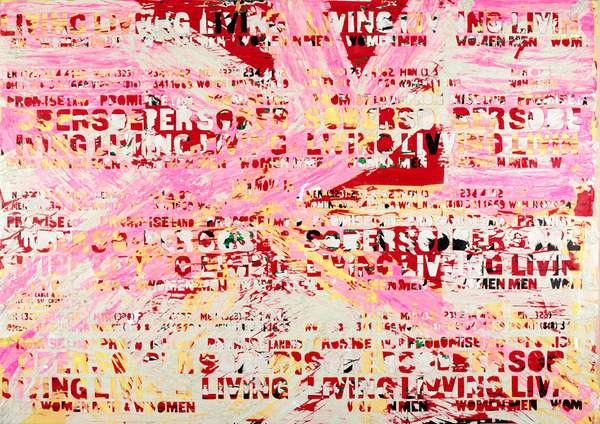 A candy colored palette of pinks, yellows, whites, and reds greets viewers in the gallery’s entry. Promise Land (all works 2012) is an “interesting” work, a “nice” collage, but certainly not the most captivating piece in the show. Its use of text strings like “promise” and “land” or “sober” and “living” create visual white noise, but the crackling static clears in the next room. Two nearly wall-sized mixed media collages, Them Big Old Titties (120” x 198.5”) and Fuhgitfullness (120” x 198”), face each other down on opposite walls. Their dominant blue-gray ground-like base (reminiscent of industrial shop towels) is cut with jagged orange neon, and juxtaposed with peeled, rubbed, and picked navys, indigoes, and blacks. In contrast, Father You Have Murdered Me (102” x 144”) suggests streetscapes in its yellow and mossy greens, aqua blues, maizes, and pinks. Scored rectangle shapes on the canvas are ordered mesmerizingly into something resembling aerial city views. Bradford is often hesitant to add paint to the collages, but the density of works can be deceiving. Silver and Blue shimmers and glistens with winding lines torn and traced across the canvas. One cannot always tell where one material ends and (or if) the paint begins. 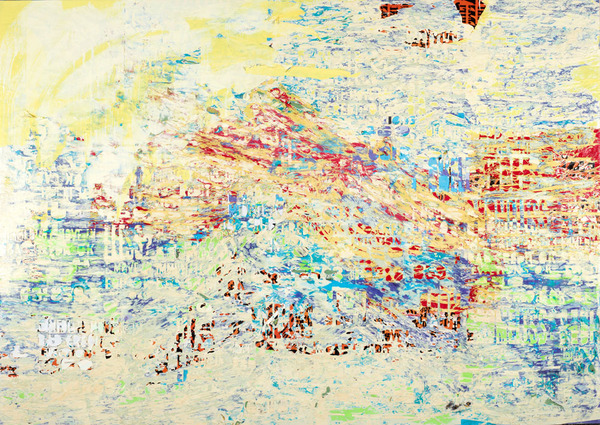 Los Angeles permeates Mr. Bradford’s works. It is where he grew up and where he now continues to live and make art. His emphasis on the local—its detritus, its forgotten and cast-off—still speaks of urbanity and all the good and bad that it encompasses. Many of the images in the exhibition do not employ text as clearly as earlier compositions or newer works like Promise Land, but words from the layered posters like “eviction” or “homeless” manage to peek beyond the sunny yellow background in others like Her Mouth Across the Table. Geographic identity surely plays a significant role in shaping the pieces, but these collages are successful in disrupting any implied narrative in a way that is markedly different from the ways in which paintings by well-known AbEx painters like Pollock, Rothko, or Klein did the same. While Abstract Expressionism specifically and abstract painting generally has seen renewed interest in the last few years, very few painters have been successful in adding something new to the ongoing debate about the death (and rebirth) of painting. Mark Bradford’s explorations of surface and material—these paintings that are often noticeably absent of paint—force us to keep asking the question, “What is painting?” Until we figure that out, I hope he keeps making more of the same.