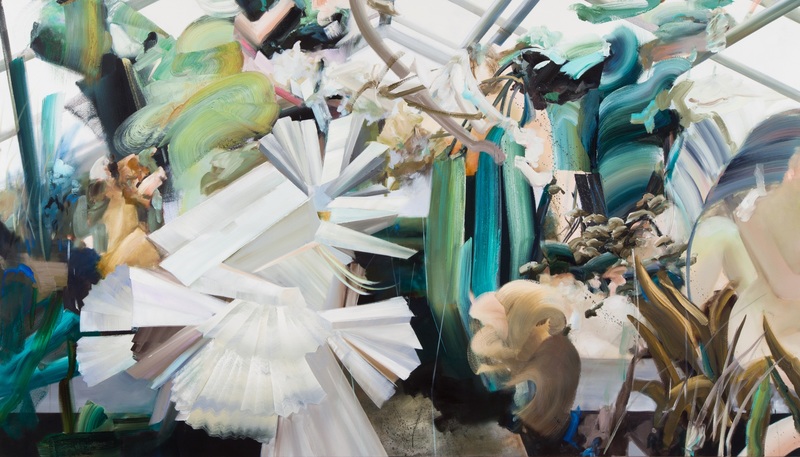 Kristine Moran’s work looks good on websites. It looks good in magazines and on gallery flyers. But oh, my god, it looks great in person. Maybe that’s why everyone and everyone’s mother turned out to see it at the opening of Between Life and Death at Daniel Faria last Friday. We were all there, local high rollers and sloppy art fans, clumped about on the gallery’s expansive floor space, trying and failing to talk to each other about something other than the pictures. Speaking of space: Daniel Faria is a converted auto body shop, practically a hangar in a city of boxy storefront spaces (gallery or Portuguese bakery below, railroad apartment above). The ceilings here, on the other hand, soar to the blessed heights. But no matter — Moran’s canvasses sing on the white walls. The place looks less barren than bursting, even on a cold October night. 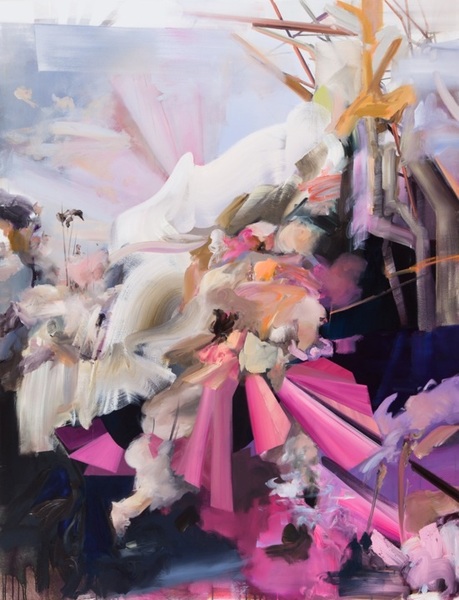 Kristine Moran, Crossing Over, 78 x 60; Courtesy of the Artist and Daniel Faria Gallery.

I’ve been a fan of Moran since I first heard of her two years ago, and I’m ashamed to say I had never seen her paintings in person until now. They are so incredibly dramatic that I’m inclined to start quoting from Anna Karenina. But there is nothing decided going on in them. They are not narrative, and are certainly not figurative. Wait — or are they? The mind starts playing tricks. Her canvasses are suffused with the most delicious, almost salacious colours… In them you find a metamorphosing host of characters. They become animals or structures, or are simply eradicated altogether in a burst of energetic brushstrokes. You wonder if your friends see what you do. It’s like watching the sky, only more exciting. And sometimes more hot pink.

Born in Quebec, now living in Brooklyn, Moran’s work has already drawn international attention. Soon after graduating from the Ontario College of Art and Design in 2004, major solo shows in Toronto and New York announced her career to a very receptive public. While generally, as noted on the gallery website, inspired by film, mythology, and urban landscapes (when I interviewed her in 2010 we talked about the condo building as a potential cradle of insanity), each new show is based on Moran’s latest thematic preoccupation. For 2009’s Laugh Until My Teeth Fall Out, it was the big primp: one woman made creaturely by her overwhelming coif, another all but subsumed by her costume. (In Moran’s words: “The feather boa overtakes her entire being.”) 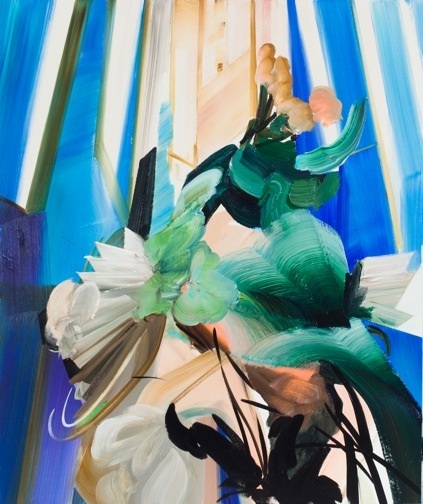 This new body of work is concerned with the ultimate embrace, or ultimate divorce. What does the space between life and death look like? Neither hard nor soft, dark nor bright: a complex and compound region of geometry and gesture, where everything, surprisingly, looks edible. It’s those colours! Would so many contemporary painters be working from monochrome palettes if they could use colour like Moran? Even when a particular thing is obviously described (that has to be a ship’s mast in Going Over, no?), its colour is what you see first, every time you look. In carnation pink, red, copper, emerald and fern green, coral, taupe, Moran has produced, I think, her best work to date — paintings in which she has completely abandoned herself to the imaginative possibilities of her form and the worlds she can draw from and disguise within it.

(Image on top: Kristine Moran, The bride's last encounter with her lovers, 48 x 84; Courtesy of the Artist and Daniel Faria Gallery.)

Posted by Katie Addleman on 11/7/12
RELATED ARTICLES
COMMENTS (0)
ArtSlant has shutdown. The website is currently running in a view-only mode to allow archiving of the content.