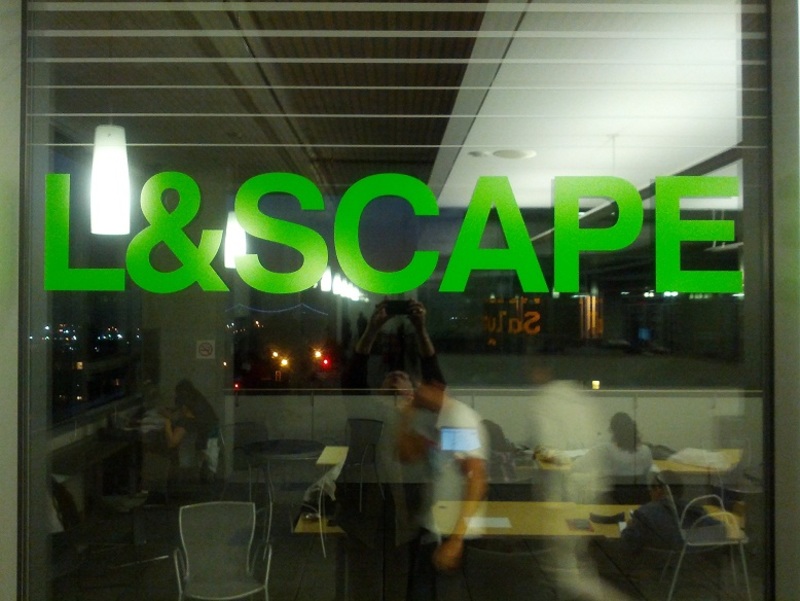 BAXTER& has lived in Windsor – directly across the U.S. border from Detroit – since he took a position at the university in 1988, where he is now an emeritus professor. In 2005 he legally changed his name from “Iain Baxter” to “Iain Baxterand,” which he writes capitalized with the ampersand symbol. Long acclaimed in Canada as the country’s first conceptual artist & the founder of the “Vancouver School” of photoconceptualism, BAXTER& has only recently come to prominence in the United States with a retrospective jointly organized & exhibited by the Museum of Contemporary Art Chicago & the Art Gallery of Ontario, IAIN BAXTER&: Works 1958-2011. We discussed his new exhibition – IAIN BAXTER&: Information/Location, North Vancouver ­– as well as his roots in that city, his electronic catalogue raisonnE, & the ampersand. 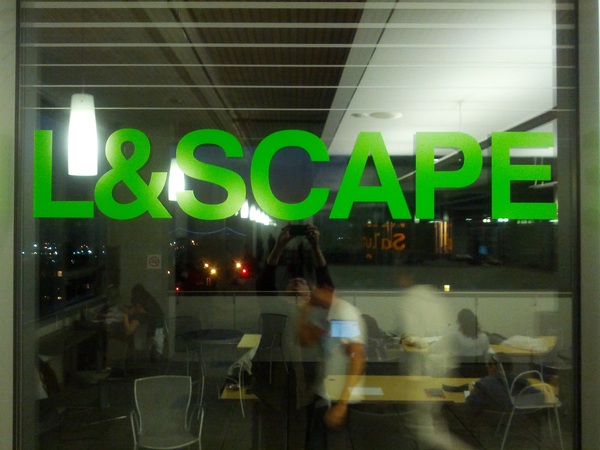 Alicia Chester: I heard you went to BioARTCAMP with Jennifer Willet.

AC: Well, there’s a lot of wordplay in there, to insert “er” into “wildness” & make “wilderness.”

IB&: Yes, & the “&.” Because of that concept coming into my life, you can tell by the way I put these words together; it’s a new way to make you think about culture. You never know why you have these ways of looking at things. As I look over my life, McLuhan was a big influence, so I’m always looking for unusual patterns in what has happened, & you never know when they’re going to come to fruition.

AC: You trademarked your name recently?

AC: The symbol? You trademarked the ampersand in Canada?

IB&: Yes, it took two years of working with lawyers to do it. If somebody starts using it for branding, it just allows me to say that I’d like to claim a little percentage. It’s part of the documentation of the project. But the really important part of this is IAINBAXTER&raisonnE, headed up by Adam Lauder, an up-&-coming arts writer.

AC: He is interested in working with the catalogue raisonné as something dynamic?

IB&: He wants to make the new template of how [the catalogue raisonné] could be in social media structures.

AC: Which makes sense, since we’re not relying on print anymore. But this image [IAINBAXTER&raisonnE Research Recruitment Poster] seems to go back to your interest in food & your restaurant in Vancouver in the 1970s, Eye Scream. 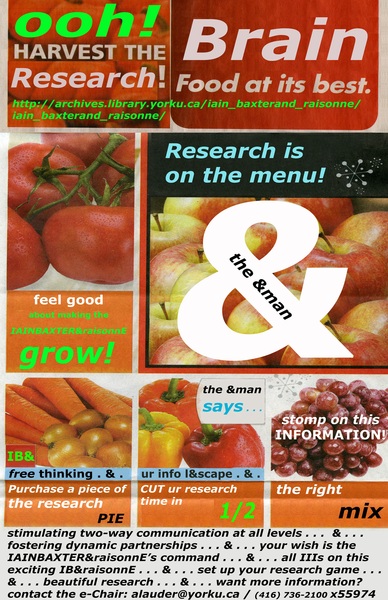 IB&: Adam’s encouraging people to come in [to IAINBAXTER&raisonnE] & riff or write essays & submit what they’re thinking. Adam & I sent a poster to American universities to encourage students to use the raisonnE for PhD research. We liked the idea of it riffing on a food poster.

The reason this thing happened is that Adam was in Montréal working in the McGill University library. At the time the president of York University decided that he would match funds for any department in the university that was the first to raise a million dollars for the first endowed chairmanship. The library did it; they wanted to have a new way of looking at library science. Adam applied, & they wanted to know what he wanted to do if he got it. He said: “I want to do this artist’s life as an electronic raisonné.” It’s a three-year position.

AC: I think a lot of people are grabbing onto this idea of working with archives & existing catalogs or even museum collections as a creative process in & of itself, to recontextualize & work with them.

IB&: Reworking, reassessing, & rethinking. It’s how we advance, right? We need more people who work with research as their art. I think that’s exciting if you’re tuned in that way, to become that kind of an artist.

AC: Are you doing something like that with your current show, IAIN BAXTER&: Information/Location, North Vancouver?

IB&: This show is kind of breaking some molds. Actually, CAUSA [The Collective for Advanced & Unified Studies in the Visual Arts, which curated the exhibition] is a collaboration of two freelance curators [David Bellman & Meirion Cynog Evans]. David Bellman remembers coming to my house in 1968 as a young student at the University of British Columbia. They’re like sleuths who spend all their time in libraries & try to rewrite all these connections they see & try to make shows around that. CAUSA came to me with this idea to have the show not in a gallery. That’s what’s exciting. [There are four locations: Loutet Urban Farm, the North Vancouver City Library, the North Vancouver Museum, & the North Vancouver Archives’ Community History Centre.]

What I did is to insert “&”s into all the stuff [in the Community History Centre] – fourteen “&”s [like into a pot on a pioneer stove]. I went in there & thought, “&... what meals would they make in this?” It’s a way to make you refocus your thinking. In a separate room we installed a template of the word “information” translated in 0’s & 1’s, & we silkscreened it all around the room like a fish tank. Inside the room there’s a vitrine containing stuff from the local dump. When I lived in North Vancouver in the 1960s, I found the bottles that I used for my vacuum-formed pieces in the dump. The dump is now a garden, so I installed mirrors in [the garden] to focus on the plants [as part of the show]. So in this vitrine is stuff from the dumps, as well as one of the plastic bottles I kept from that period. 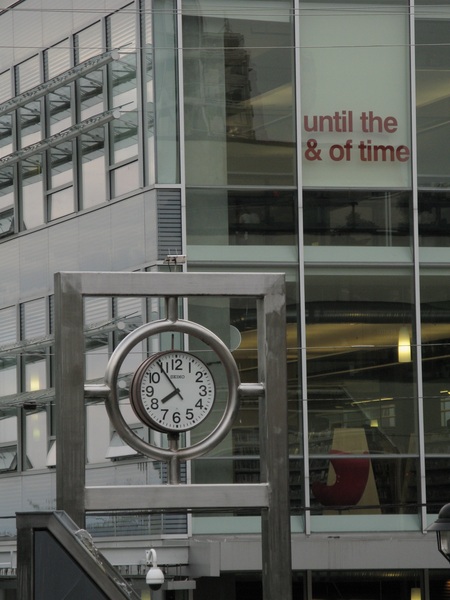 AC: So you’re coming back to your roots & reflecting a bit. You also have pieces in windows for the show, like ANDDNA?

IB&: Yes, the language pieces worked well in the library: until the & of time, ANDDNA with stick-on letters in the kids’ section, & the word L&NDSCAPE superimposed over a landscape looking to the west. It’s kind of a new urban/culture experience.

AC: I’m thinking about your roots in Vancouver again. You had a restaurant there with partners Ian & Murray Dawson called Eye Scream in 1977, like Gordon Matta-Clark’s SoHo restaurant FOOD in 1972. One of your students, Ian Wallace, worked in Eye Scream?

IB&: No, no, Roy Arden did. We had meals riffing on Canadian artists, like the Group of Seven snails. Snails are usually served in a group of six, but the dish paid homage to the Group of Seven [also known as the Algonquin School, a group of Canadian landscape painters from 1920 to 1933]. & then there was the Cubist Salad. It was made of cubes of food. The thing was a little too far ahead of its time for Vancouver. It should have been in L.A. or New York. I don’t know why no artists or cultural guys have made a restaurant riffing on the art scene. It’d be fun to look at someone like Damien Hirst & analyze [his work] to make food.

AC: Is teaching like art making to you? Does it go back to the idea of your art practice being very fluid & taking different forms? How do you think teaching has influenced your practice?

IB&: In a very big way. That’s why I really enjoy teaching – a way to reach budding artists, students, & the ordinary person. That’s why I came up with those ideas of looking at art as information – switching from the word “art” to VSI: Visual Sensitivity Information – as a way to maybe bridge that gap. It’s always about talking to people. [For example] I really like going & talking to people who run businesses, because if you can get in the back way, through the warehouses, you can see all the materials they have & what they try to do with it. I’m always trying to get to the inside. It’s about communication. I think teaching is a way to get a sense of that.

AC: So is teaching a collaborative process?

IB&: In a way. & then the “&” as a concept entered my life as a way to connect things. & then I had health issues, a quadruple bypass. & so you start rethinking large parts of life. I just like the idea that the word “&” is a positive word & connects everything together, to the point that I think about it so much that I started seeing that if there weren’t “&”s, all of our ideas would just float away. We couldn’t hold them together. If you read any important document, like the Magna Carta, they’re in there. I’m doing a major work around that. 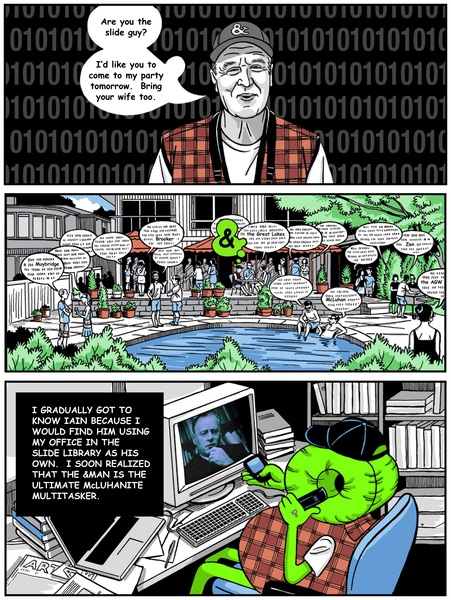 AC: Right, it’s holding everything together. & now you’re recording how many “&”s you say in a day?

IB&: I’m working with some guys at the University of Windsor on a little recorder. & it depends on how much you talk to somebody that day, right?

AC: Do you have it right now?

AC: At least. & it becomes a filler word, too, when people are not sure what to say next.

AC: Now that you’ve legally changed your name, do you legally have the ampersand at the end of your name?

IB&: No, in our country [Canada] they won’t let you have a symbol in your name, but I got around it by just spelling it out: IAIN BAXTERAND. & then I write it with an ampersand, unless it’s something very formal like a driver’s license. But it still works for me.

AC: & is that why you trademarked the ampersand?

IB&: Yes. I was thinking about it yesterday, that all those other conjunctive words like “or” & “but” don’t have a symbol.

AC: Do you know the history of it at all? The way the ampersand is shaped is actually a wrapping around.

IB&: A little bit. It’s like the music symbol only not quite, or the dollar sign. There’s a whole lot of really interesting pieces I’m working on with it. There are some pictures of me just holding an ampersand [next to an object], so it’s me &… a snowblower. So if I stand beside a snowblower while holding an ampersand, it’s IAIN BAXTER&… & this thing.

IB&: I know. That’s a part of it. It’s everything we’re in. There’s me &… this chair. I mean, everything is interconnected: information & ecology & art & culture & life & eating & food. It can all be encompassed in my five favorite words: information, love, wonder, play, &... &.

IB&: I want to be about what I’m about. I’m about looking at universal truths & am more of a Duchampian character.

AC: With a lot of humor.

IB&: Yes, I think that’s what life’s all about. So that’s maybe the &MAN’s little contribution… & when we all pass on, I feel all that is left is an &…

ArtSlant would like to thank IAIN BAXTER&, Andrea Slavik, Adam Lauder, Victor Romão & CAUSA for their assistance in making this interview possible.

Posted by Alicia Chester on 10/21/12
Tags: conceptual
ArtSlant has shutdown. The website is currently running in a view-only mode to allow archiving of the content.