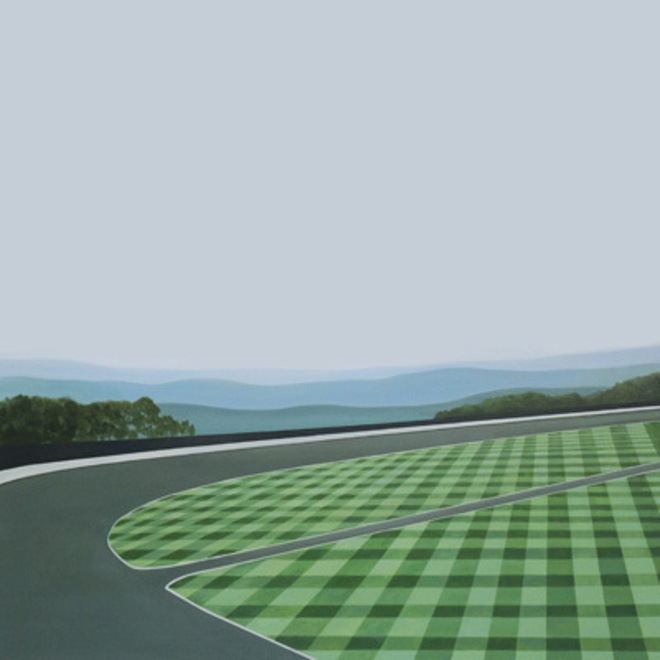 Dec. 2008:  ArtSlant's editor, Georgia Fee, visited Jake Longstreth in his studio in Oakland, CA.  Longstreth was preparing for his second solo exhibition at Gregory Lind Gallery in San Francisco.  Fee and Longstreth talked about his recent work, emptiness, big box takeover, and life as a painter.

Jake Longstreth in his studio in Oakland, CA, 2008; Courtesy of the artist

ArtSlant: Your paintings often examine frontier spaces: the edges where civilization meets nature. Are these real spaces?  Manufactured metaphors? Can you talk about your attraction to these places?

Jake Longstreth:  Why am I attracted to these places?  They are beautiful and dynamic.  Trees, hills, sky, asphalt..there is an inevitable sense of drama and consequence.  Although I'm not sure "frontier spaces" is how I would describe them – as the Eagles sang "There is no more frontier, we've got to make it here."  I'm kind of kidding, but it's true: frontier implies the presence of wilderness, which I don't I think is in my paintings or our lives really.  There are plenty of wooded hillsides and trees, but they feel contained, not wild.  The trees next to the parking lot are only a few decades old, the land has been cleared before, and if you walked into those woods you would hit another shopping center or road before too long.

Of course, the driving force behind all of this is an enduring interest in representation, depiction.  How do these marks and colors add up to anything?  How can I depict space, light, atmosphere, distance?  The paintings are not representations of real places, but I want that tension to exist - for the viewer to wonder "where is this?" "is this real?"  I guess I try to find a place between "documentary" realism (to the extent that it exists) and a symbolic metaphor.  Leaning too hard towards either pole ends up being boring. 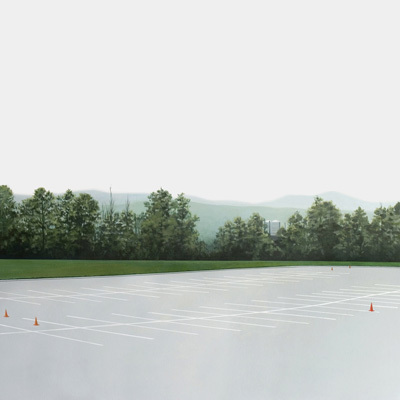 AS: What are your influences? Do you relate to American landscape painting? Regionalism? Are you continuing the examination of the (almost) unspoiled wilderness?  Looking for the sublime?

JL: Friends and family are a tremendous influence.
Many artists: photographers Robert Adams, Frank Gohlke, Lewis Baltz, Andreas Gursky, painters Robert Bechtle, Edward Hopper, David Hockney, Richard Diebenkorn, Alex Katz, Caspar David Friedrich, Gerhard Richter.....I found an Irish painter on the internet yesterday, Mairead O'Heocha, who blew me away.  I tried to do a painting like her today and it was a total disaster. Ha! Classic!
I usually don't relate that much to 19th century American landscape painters like Thomas Cole. The work is often too grandiose, straining too hard for the sublime – too many dramatic thunderstorms.  I like John Kensett and Winslow Homer – their views were more protracted, simpler.  And actually Frederick Remington I find to be a really interesting painter - his subject matter, a romanticized vision of Cowboys and Indians, is really awkward in today's context, but he is really quite amazing with handling space, light and distance. 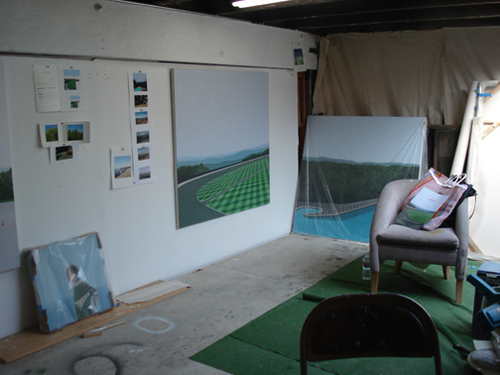 Longstreth studio in Oakland, 2008; Courtesy of the artist.

AS:  There is a good deal of stillness in your paintings, control and detachment. Are you a Zen nature boy?  Where's the mess?

JL: That's just who I am.  I am good with form and color and thinking about pictures in groups – editing.  I don't have a particularly expressive hand when it comes to line quality and brushy paint handling.  So I try to be precise but not finicky.

And I guess I just like art that is still and quiet – a reflection of how we should be when viewing it.  Static visual art has certain strengths – the ability to crystalize and make coherent what otherwise might not be.  Of course messy art can do that too.  David Shrigley's work is very messy and gross, but it is profound, direct and intense too, even beautiful.  I wish I could do stuff like that.

AS: While on residency in Nebraska, you produced a series of photographs documenting your travels across the country.  Really beautiful work.  Can you talk about this project?  Favorite anecdotes?

JL: That was a project I worked on sporadically for five years.  It was an attempt to document the explosive growth of chain retailers like Wal-Mart, Home Depot, Office Depot, etc and their impact on our landscape.  The question I was  exploring was "is the landscape resilient?"  How do we reconcile the homogenization of our built environment with the tremendous natural diversity in the national geography.....What does that look like?  I thought of it as less a critique than as a report.  The project spanned the country, going from the Northeast through the Midwest and then to California.

It was a really fun project to do despite the harshness of the subject matter.  I've just finished editing it into book form.  The last picture in the book was made at night in Sturgis, South Dakota during the annual motorcycle rally that happens there every summer.  I was sleeping in the back of my mini-van in the Wal-Mart parking lot and there must have been 50 RVs scattered about doing the same thing.  It was a hot, humid night and people were hanging out grilling, drinking beer – it was like guerilla Big Box camping.  Bizarre.  I shot a few rolls that night and got a good picture of some people relaxing in beach chairs in the glow of the Sam's Club lot.  There was a nice, improvised sense of community that night.

AS: Who's Jake Longstreth outside the studio?  What are you listening to? Surfing? Reading? Talking About?

JL: I'm reading a book called "Don't Sleep, There are Snakes" written by a former Christian missionary who lived among the Piraha tribe in the Amazon for 30 years and lost his faith in the process.  The Pirahas do not recognize the past that precedes living memory, (they have no term for great-grandmother) so they have no concept of a Creator and were thus immune to Christian theology.

I've been really interested recently in Hank Williams, Merle Haggard, Gram Parsons and country music generally.  A few months ago I was driving through the Sierras with my brother and we were listening to this 80's Dwight Yoakam song, and Dave, my brother, suddenly pointed out that it sounded like R.E.M., and it was amazing when you listened for it how similar it really was.  I love stuff like that.

ArtSlant would like to thank Jake Longstreth for his assistance in making this interview possible.

Posted by Georgia Fee on 12/4/08
ArtSlant has shutdown. The website is currently running in a view-only mode to allow archiving of the content.