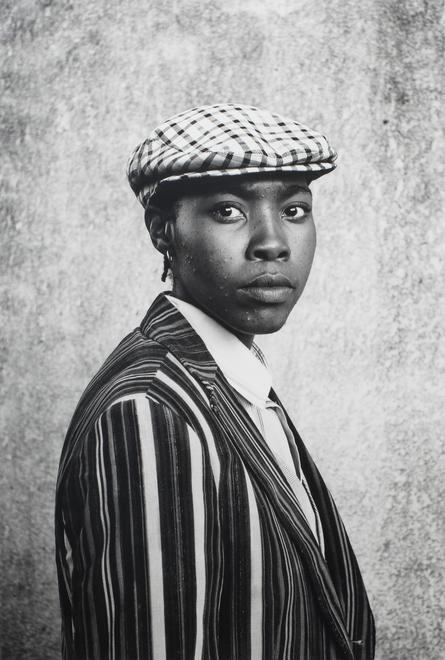 The images in Yancey Richardson’s summer group show challenge us to examine the ways in which seeing is performative. Through a subversion of social codes and values related to gender and representation, “tête-à-tête” necessitates an uncomfortable slowness and close looking. Curated by Mickalene Thomas (who also has work in the show), the exhibition features photography and video from artists from Africa and the Diaspora including Derrick Adams, LaToya Ruby Frazier, Jayson Keeling, Deana Lawson, Zanele Muholi, Clifford Owens, Mahlot Sansosa, Malick Sidibe, Xaviera Simmons, and Hank Willis Thomas. The images the artists present force a reconsideration of the social information we think we garner from the act of looking.

Like most of the work in the exhibition, the Derrick Adams c-print Static/Distortion/Interference (2010-11) quietly demands that a viewer linger in order to really see. The image, inspired by Adams’s performance piece The Entertainer, features the obscured face of a man framed by a television screen, a microphone, and a speaker. With a nod to the image saturation in popular media and a wink at propaganda tactics used in advertising, Adams draws attention to the figure rather than distort or interfere with its visibility, like the work’s title might suggest. LaToya Ruby Frasier re-imagines the notion of the gaze in her two-minute, 2008 video Momme Portrait Series (Heads), which features the artist and her mother exchanging a long, measured, and careful look. The side-to-side juxtaposition of the women’s images allows each to mirror the other’s movements blindly and solemnly, once again alluding to the performative nature of looking. 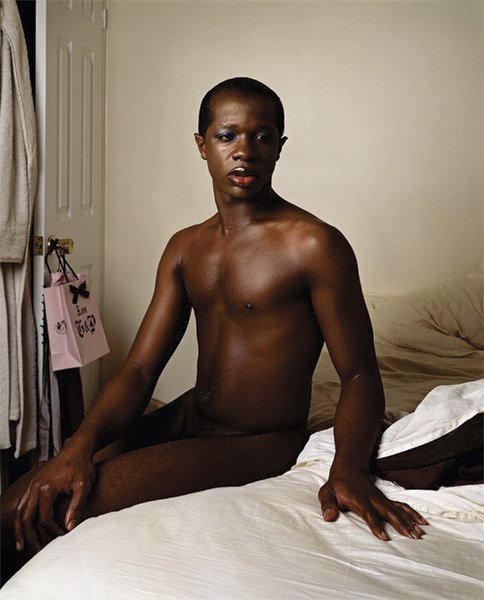 Portraits of South African lesbians from Zanele Muholi’s series “Faces and Places” (currently on view in full at dOCUMENTA 13) challenge what are now standard Western ideas about gender. Muholi’s images don’t merely imply or show androgyny; instead, they offer variations. In Sunday Francis Mdlankomo, Vosloorus Johannesburg (2011) and Zimaseka Zim’ Salusalu, Gugulethu Cape Town (2011), women with steady eyes and defiant gazes peer back at the camera that captures them while a bathing beauty in Tinky II (2010) stares out into the distance, unburdened by the camera’s scrutiny. Similarly, Deana Lawson elegantly presents a destabilization of gender with the image of a man perched on a bed in Thai (2009). His slightly diverted and nonchalant gaze contradicts the gender-bending charge of the make-up on his face.

From the beginning of our lives, we learn that we can know the world through studying, analyzing, dissecting, and examining it with our eyes. Eventually, those same eyes convince us that we see someone seeing us everywhere. Mickalene Thomas’s instinct to go “head to head” with the nuances of seeing are astute; in a world that gives us so much to see, we are bound to overlook something. “tête-à-tête” provides a good opportunity to go back and see what we might have missed.