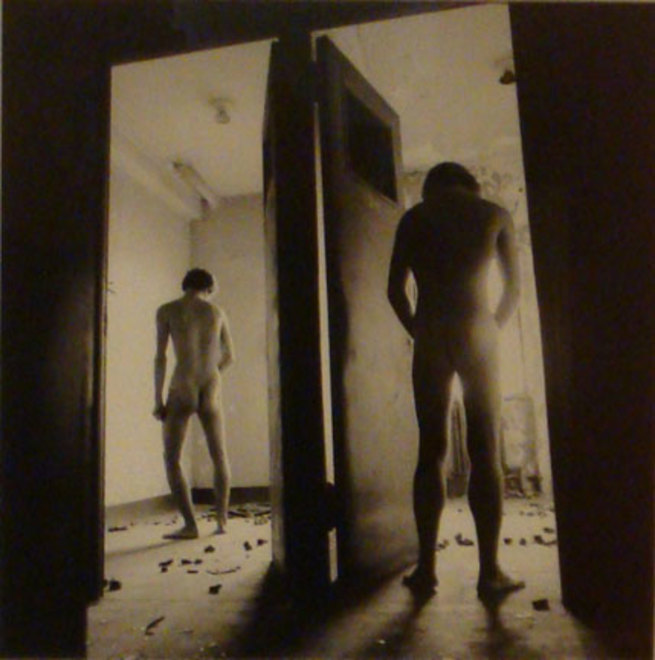 “I was there; it was everything you ever wanted,” the man—probably in his 50s—gestured toward the left panel of Gordon Matta-Clark’s photographic diptych, Day’s End (Pier 52). “These walkways—they were full of naked men. Beautiful, naked men.”

I tried to picture the naked men in the square, 1975 photograph of a dark warehouse interior, but with the other man standing a few feet from me, I focused instead on the right panel, not wanting to seem interested in him. Was he flirting or just telling a story? “One time my friend fell into one of these floor cuts, fell right into the Hudson River.”

“Did he survive?” I realized the many ways this question could be interpreted. I wanted to clarify; my mind buzzed with thoughts about AIDS, cruising, and the summer heat. 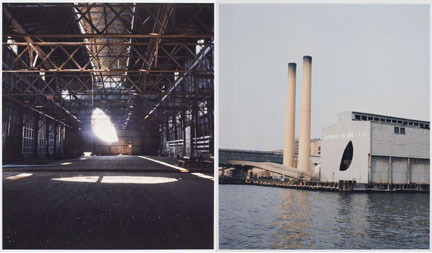 “Oh yeah, swam right out.” He laughed and walked to another part of the museum. I shifted toward the left-hand photograph and now I understood what he meant. Matta-Clark (1943-1978), known for his violent alterations of public spaces, had sliced through the floor; in the photograph, the dark band across the ground isn’t a shadow, but a gap giving way to water below. Directly above are metal bars that form walkways. White, stark daylight pulses from a hole the artist had cut into the wall in a shape that reminds me of a gibbous moon. In the space of this image, I imagined men in various levels of nakedness, toned and tan in briefs, ass-less chaps, jock-straps, or torn jeans adorned with a handkerchief in the back-pocket: caressing, blowing, fucking, or watching other bodies in motion.

The other photograph is an exterior view of the same warehouse, seen from across the water; it’s a gray, boxy building standing against a cloudy, New York sky, dwarfed by a pair of factory chimneys. The gibbous-hole is a dark cut across its façade: a mouth or an eye.

With its mix of danger and allure, Matta-Clark’s diptych opens “The Piers: Art and Sex along the New York Waterfront” at Leslie-Lohman Museum of Gay and Lesbian Art. It is a show composed mostly of photographs that document the landscape and activity along the Lower West Side of New York City, between 1971 and 1983. The works of 21 artists, gathered by curators Jonathan Weinberg and Darren Jones, line the walls, loosely organized according to an area along the waterfront.

As Weinberg writes in the catalog essay, the piers below Fourteenth Street were far from abandoned: it was populated with all sorts of drifters. Used as trading ports and passageways, the piers and its wharf buildings were indeed left for decay once air transport was made possible. City bankruptcy and failed renovations created the conditions for a space that Matta-Clark described as existing in “an ugly criminal state,” where “city-condoned anarchy [reigned].” In that ugly criminal state, erotic collaborations thrived: paintings, performances, films, and sex. Though there’s much more to the history of the piers than can be outlined in one exhibition, the images on view suggest larger movements and events in each artist’s work, among the burgeoning art world of the Lower East Side, and in the queer communities.

While in the two photographs by Matta-Clark the viewer must strain to discern bodies in space, in other images, figures conspicuously cruise through the various ruins of the piers, including the cut-up structure of Pier 52 portrayed in Day’s End. Photographs by Peter Hujar (1934-1987), Shelley Seccombe, Stanley Stellar, Andreas Sterzing, Arthur Tress, and David Wojnarowicz (1954-1992), among others, and a film by Ivan Galietti reveal bodies seen through the overlapping frames of doors, hallways, broken windows, and felled metal.

Along the gallery walls, I follow Hujar and Stellar through black-and-white-tinted hallways. For their apertural cruising, the two men shared a camera—as the wall text says, “in an act of mutual trust an d respect”—and photographed each other one day in 1981. Hujar, seen by Stellar, leans against the door, topless with a shaved head, his jeans unzipped. He holds his semi-erect penis in both hands, tenderly as though it were not a part of him. His expression beckons, quietly seductive, as in many of his self-portraits from the late 70s and early 80s. Beside him, on the peeling walls, is a Keith Haring graffiti of two figures dancing, erect, with lines of velocity thrusting them forward into each other. Stellar, cruised by Hujar, appears coy in a tight tee, standing in the middle of an empty room; an abstraction of tilted shadows and rectangular sunlight behind Stellar reveal Hujar to be a great formalist.

“Passing down a long hallway there were glimpses of frescoes, vagrant frescoes painted with rough hands on the peeling walls, huge murals of nude men painted with beige and brown colors coupling several feet above the floorboards. Some of them with half-animal bodies leaning into the room’s darkness with large outlined erections poised for penetration.” 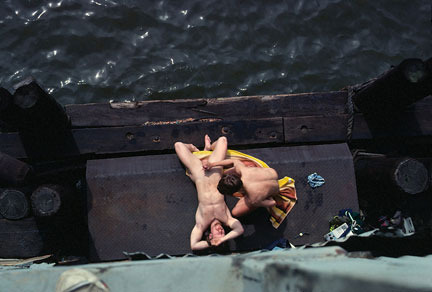 The priapic, nude men with “half-animal bodies” were undoubtedly the works of Tava (Gustav von Will), who painted titanic figures on many waterfront surfaces. Here, in the exhibition, photographs by Leonard Fink (1930-1993) and Lee Snider show how prolific Tava had been. His figures seemed to grace everything, from asphalt paths to brick walls, serving as backdrops for the men cruising each other. Hanging among the photographs, fragments of marble and corrugated tin offer rare glimpses of Tava’s physical work, which were torn down with the gradual razing of the piers in the 80s and 90s.

For Tava, Wojnarowicz, and many other artists, the piers were a hybrid space of public and private, where the erotics of art and sex could be performed. There was danger of course: muggers and the possibility of being crushed by the precariously standing ruins. In Wall Newspaper – West Street at 11th Street (1975), a photograph by Seccombe, two transgender women pose before a wall that warns of recent assaults by muggers who work in teams.

Recalling the feelings churned up in me by the man whose friend had fallen through the floor, I can’t help but feel a sadness in cruising these images. I think about the longing and loneliness I’ve felt while cruising men at bars. For me it is the abstraction of a past loss that becomes palpable in the present.

At “The Piers,” though, that sadness feels different, more complex, larger. There’s the sadness that the act of cruising for a partner points to, the sensations of arousal and the possibility of sexual pleasure mixing with memories of, and desire for, an absent body. But there’s also the sadness of cruising the queer history of New York and finding a great loss there I can’t quite grasp. 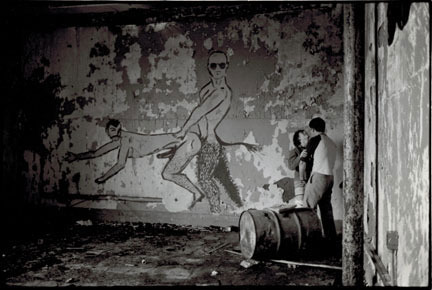