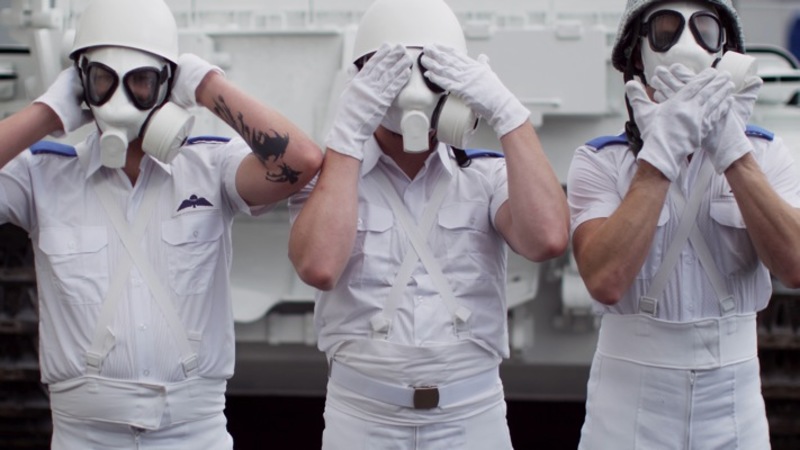 Military marches, missiles on display, and elite leaders in dark green “workers’ clothes”: images of North Korea seem ubiquitous in our media culture. Yet the opacity of the reclusive country continues to work up a thirst for more images. Photojournalistic exhibitions promise to sooth our thirst with intimate ‘inside views’ of North Korea, but giving visibility to an already hypervisible subject can only aggravate our thirst. POWER GAMES, currently in view in NOoSPHERE, offers us a possible exit from the mirror palace of media images via multimedia installations that transpose North Korea into unfamiliar settings.

POWER GAMES is a collaborative product of the Norwegian artist Morten Traavik, the US artist Peter Fend, and the curator Yulia Tikhonova. The most eye-catching are Fend’s graphite drawing and Traavik’s imposing photographic triptych which face each other across the gallery space. The drawing at first appears like airline flight routes, but rather than human travel routes, the map traces the migratory passages of birds over the Korean peninsula. The North-South orientation of the migration replaces the East-West orientation of the familiar 38 parallel. Fend’s ecological remapping of East Asian geopolitics is consistent with the artists’ passion in visualizing environmental crises through scientifically accumulated data. In the particular context of the exhibition, however, Fend’s work reminds us of the two ironic facts about ecology in the Korean conflict: while the Korean War had reduced the mountains and fields across the peninsula into barren lands, the DMZ today offers a rare sanctuary for natural life. Looking at Fend’s map, I also remembered the lyrics of the once banned record of the Japanese band Folk Crusaders that sang about the tranquil stream of River Imjin that runs through the DMZ. If Folk Crusaders sang of the free movement of the birds that crossed Imjin River in order to conceive of a naturalized image of a unified Korea, Fend uses the ecological metaphor to provocatively suggest repartitioning the country along the “natural” North-South axis. Fend’s absurd solution of creating East and West Koreas is a reference to Norway’s peaceful secession from Sweden in 1905. His second work grafts on the map of the two Scandinavian countries (East and West Swedens?) onto that of East Asia.

Across the room, Traavik’s imposing photographic triptych presents another way of transposing the DMZ. Two tanks face each other: one is adorned with the letters “YES” while the other dons “NO.” The hyperbolic symbol of conflict appears alien against the dull grey Scandinavian sky and the impassive passerby. Traavik’s video work titled “The Promised Land” literalizes the transposition by bringing the symbol of North Korean Socialist spectacle, the “mass game,” to the Norwegian city of Sør Varanger. By working with the cultural ministries of both Norway and North Korea, Traavik manages to bring two North Korean directors to instruct the Norwegian participants of the mass spectacle that involves holding color-cards that collectively show alternating images. No longer are North Koreans the objects of representation, but its facilitator. The North Korean directors make no appearance in the video, for the primary subject is the “mass game” enacted by the Norwegian participants. A frequent visitor to North Korea, Traavik again uses his diplomatic talent for the icing on the exhibition: the interactive computer game that is produced by North Korean engineers. The rules of the game are simple: you are either South Norway or North Norway and the goal is to take control of the entire territory. Shrewdly enough, the engineers remember to add extra players: the EU, Russia, Saami, and US (why not?), so that the total number of competing powers is six (just the right number for a six-party talks!).