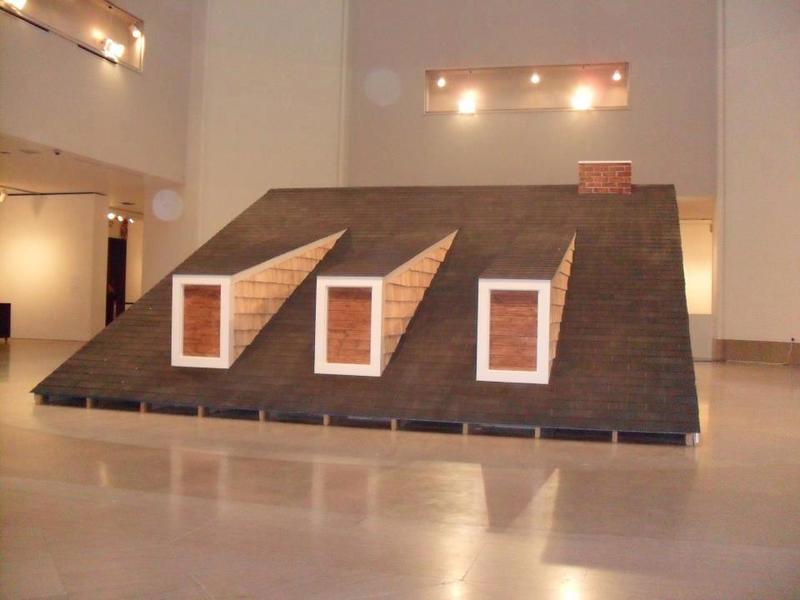 New York, June 2012: The Period Rooms and reconstructed Schenk House at the Brooklyn Museum invite visitors to glimpse a slice of history -- but only as close as the heavy glass partitions allow. One floor above, The Eastern Oracle appears like a continuation of the historic Schenk House, a rooftop peeking through the rotunda floor. Only this structure is different from the floors below. Rather than staring inside with nose pressed to the glass, Brooklyn artist Heather Hart invites visitors to not only come in, but also to climb on the shingled roof top.

Visitors can play an art-inspired game of King of the Mountain and run their flat or soft-soled shoes all over the roof of The Eastern Oracle: We Will Tear the Roof Off the Mother, or just sit on the roof’s peak and watch the line to the Keith Haring exhibition from a bird’s eye view.

The inside of the installation has the same eerie feeling of a long forgotten attic, with every creak of the wood above evoking the paranoia of ghosts. The shrine at the end of the short corridor solidifies this feeling of the haunted, offering visitors a moment of prayer, with an offering of a gold leaf to an unknown deity. The gold flecks that dot the hearth-like sculpture glitter in the low light from the roof’s dormers, and offer a sense of peace and solitude in the museum, while countless visitors stomp over the installation above. Hart reflects the museum’s collection once more, by placing a mirror in the center of the shrine that is a replica of a piece in the museum’s Egyptian collection.

Heather Hart’s Eastern Oracle invites visitors to experience the museum in a new way, by allowing an interaction that would normally be expected as a “don’t touch” installation.

Lori Zimmer: Eastern Oracle evokes narratives, from the history of barn raising, to cinematic scenes from movies like the Wizard of Oz. Did you consider the array of narratives when creating the piece, or did you have the extension of the Schenk House specifically in mind?

Heather Hart: In all my work I play with multiple narratives and how they converge and fracture, but I always need to keep them open enough to invite the viewers to bring their personal frames of reference to the space. But, yes, I was thinking about the community that is critical for a barn-raising, the surreal nature of Native American legends that remind me of the Wizard of Oz, the simple but cosmic relationship to the museum as well as my own nostalgia as the daughter of a carpenter to name a few. This piece lies in the enigmatic space of in-between; a form whose identity is open to interpretation… My roof lies somewhere between above/below, inside/outside, extrovert/introvert, spiritual/natural, safety/danger, nostalgic/futuristic, utilitarian/frivolous, thoughtful/playful.

LZ: Why did you decide to allow the public to interact with the piece, allowing them to climb on the roof top?

HH: Most of my work guides the viewer to become a participant in some way -- to collaborate with me somehow. So this aspect was probably challenging for a museum, who has to think about preservation, liability and respect, but interaction is natural for me. I love making things but I also want my conceptual work to be an experience that lasts longer than the viewing process. I believe that involving all the senses and creating a task or physical action of some kind can access people more deeply than through solely visual stimulation. I’m interested in the process of change and how people affect each other and their spaces. I’m enthralled with play and how it may relate to communication and our belief systems. And I’m interested in how art can act as catalyst for all of this. 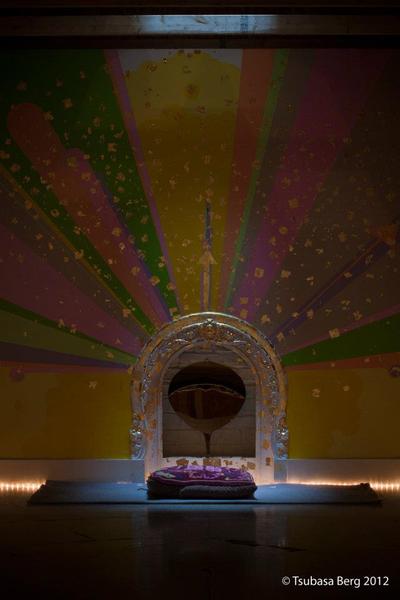 HH: The basic structure is similar; it is based on the roof I grew up under and on top of. And they all involve the shrine at its center. But the nature of these pieces must be site-specific to involve the specific demographics and histories that the roof lands in. I like to figure out what my personal relationship is to the space I land in. So with the Northern Oracle in Minnesota I was thinking about the history of the Chippewa people, the roof of the house we lived in as artists in residence, and the geographic relationship it had to the Mississippi River. The shrine inside the oracle was a pyramid of tarred trusses that the viewer was invited to wish on and leave gold. With the Eastern Oracle I made structural reference to the Schenck house for its history in Brooklyn, I thought about the Museum's unique collection and mission and I thought a lot about the roof’s relationship to the architecture of the Museum and the cosmos. The shrine inside the Eastern Oracle is a mirror that I based off of the mirrors in the Museum’s Egyptian collection.

LZ: As opposed to the piece’s outside, which invites playful climbing, the interior is a place of tranquility and solitude, two very different experiences. Do you often create this duality in your work?

HH: Yes. Always. Some people say it is because my work is autobiographical and I am biracial. Tee hee. 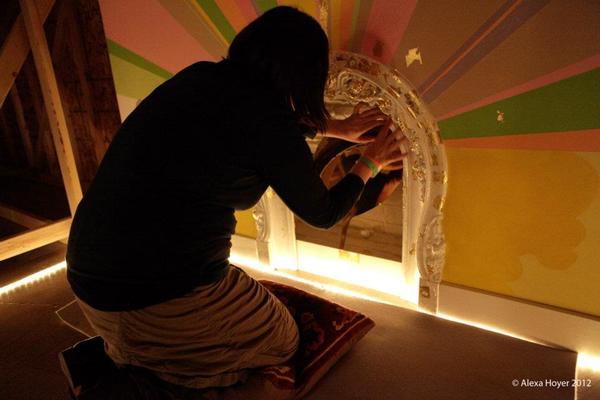 LZ: Tell me about this private altar/oracle space inside the piece. (I was lucky enough to visit during the week before school groups got there, and sat in solitude for a good five minutes before anyone else entered).

HH: I think it is human nature to look for guidance outside of ourselves. Some people go to church, some people read statistics, some people read every interpretation of Mayan prophecies they can get their hands on. It’s hard to accept the responsibility of our own choices. So I wanted to play with a mash-up of things that have been healing in my life and create a ritual for visitors that ends in self-reflection, reclamation and empowerment.

LZ: Historic architecture seems to be a thread throughout some of your pieces. Do you feel you create architecturally inspired installations, or venues for performance involving public interaction?

HH: Um… Yes?  I obviously have an issue with categorization. I feel most comfortable in spaces between definition. I am interested in creating space to compel the visitor into being the performer but I am also very interested in craft and in beauty. I must have them all. 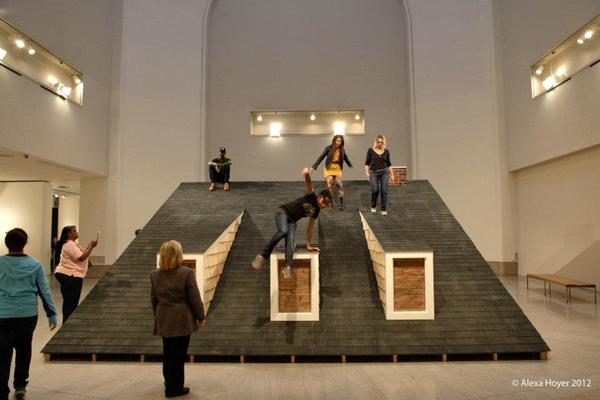 LZ: Much of your work references historical racism, slavery and Colonialism. Does Eastern Oracle have these connotations as well?

HH: Yes, but even though my work refers to my personal histories, I think it is most important that the visitor has space for their perception to be a part of experiencing my work.  I think about what I call “forefatherness” in all my work. I believe that there are certain forms that a person has visceral responses to based on what ideas were bequeathed to them from their family or a collective consciousness, not necessarily based on their lived experience. The process of building a roof is something that has been passed down to me from my father but the form holds feelings of memories for me that reach beyond my personal experience. I may have thought about the relationship of the Lenape people to the Schenck family and I about reclamation and self-empowerment in reference to Post Traumatic Slave Syndrome. But I don’t make “black art” (whatever that is) and I don’t make work for just my people nor just about my people. Again, it is important for me to leave room for visitors to access my work from many angles, regardless of who they are, and one reading is just as important and valid as the next because part of the interaction is their perception.

LZ: Your CV is incredible: you’ve shown at Brooklyn Museum, Real Art Ways, 92ndYTribeca, Jersey City Museum (and on and on), what projects do you have on the docket for 2013?

HH: Ooooh, 2013 is so far away! Well, how about some highlights for the next year? I am currently on a Jerome Travel Grant researching rooftops that my family lived under. I’ll be taking part in The Bearden Project at The Studio Museum in Harlem this summer and it is rumored that I will be part of the Dumbo Arts Festival in September. Then I’ll be heading to the Fine Art Work Center for an artist residency and next summer completing a residency at Robert Blackburn Printmaking Workshop.

ArtSlant would like to thank Heather Hart for her assistance in making this interview possible.

Posted by Lori Zimmer on 6/23/12
Tags: mixed-media, installation
ArtSlant has shutdown. The website is currently running in a view-only mode to allow archiving of the content.