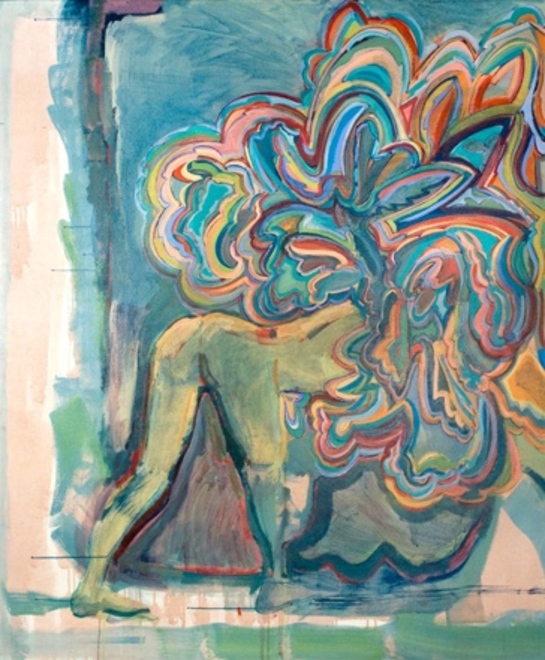 Let us examine the rainbow.

A radiant bend of light that gives pause to even the surliest of sailors, the direct route to concealed honeypots glutted with gold, a divine message to Noah that the rinse cycle was completing its global soak, the rainbow is such an easy handle for spectral forces, sublimity and facile poetry that it may even be too obviously beautiful for us to concoct anything better than it, thus making rainbows the stuff of sappy cards and toddler’s television. It’s hard to beat the beauty of the rainbow.

Do not all charms fly
At the mere touch of cold philosophy?
There was an awful rainbow once in heaven:
We know her woof, her texture; she is given
In the dull catalogue of common things.
Philosophy will clip an Angel's wings,
Conquer all mysteries by rule and line,
Empty the haunted air, and gnomed mine
Unweave a rainbow [...]

But there’s the rainbow and of course what we’ve done to it.

Graphically the poor thing has been used for a number of cross purposes. For flags alone, the rainbow appears in the US for gay pride; in Italy for peace; in Russia, it represents the Jewish Autonomous Oblast; and in Peru, the lost territories of the Inca.

My first experiences with the rainbow probably date back to the iridescent sheen on a bathtime bubble, but I’ve fond memories of looking over my sister’s Lisa Frank sticker collection, where, amidst the prancing unicorns, grinning penguins, and playful seals, there was invariably a rainbow. The rainbow at perhaps its saccharine low.

In the black rooms of Night Gallery, the painter Paul Waddell makes the rainbow look like something in between a plasmic sexshroud or some gooey physical outcropping of a bunch of rather randy humanoids. Sometimes the billowing rainbows in Waddell’s paintings seem to consume their hosts, leaving not even legs below their bands of color. Are the exposed asses and the smeary prismatic colors (both goopy and radiant) sexy?

For too many religions and mythologies to name, the rainbow is a connection between the human and the divine. A bridge, a messenger, a divide between the world of the gods and ours. Armenian mythology had the rainbow as the belt of the sun god.

So let us cross that bridge. Let’s undo that belt.

I’d be lying a little if I misconstrued these paintings as lusty exactly. They don’t really turn me on, they are sort of uncomfortably sexy, like pictures of animals having sex (perhaps this is your fetish dear reader, and I do not judge you for it, but for the rest of us); they are something quite literally sexy, but not exactly salacious. The bored expression on the lioness’ face hardly inspires titillating chills, but it doesn’t exactly not inspire a few meandering thoughts. In short, Paul Waddell’s paintings are like lions fucking. They are rainbows growing legs and doing it. They are a geeky, somewhat stoned thought brought to its graphic conclusion with sharpie markers and paint on canvas. Just to underline its underlying geekiness, perhaps even to make it an overlying geekiness, there’s a kind of wonky artist-made, amateur sci-fi movie in the other room, but despite the comfy coach pointed at the sizeable flat screen, the paintings are the point.

When you go see these paintings, will sublimity follow? Well, that, like all couplings, physical or spiritual, is hardly guaranteed. But rainbows have a satisfying ease and these paintings, in their distinctly geeky discomfort, share in that ease. Waddell with a mind towards the otherworldly has woven himself a new rainbow. And it’s always hard to dislike a rainbow.

(Image on top right: Paul Waddell; Courtesy of the Artist and Night Gallery)

Posted by Andrew Berardini on 6/23/12
RELATED ARTICLES
COMMENTS (0)
ArtSlant has shutdown. The website is currently running in a view-only mode to allow archiving of the content.