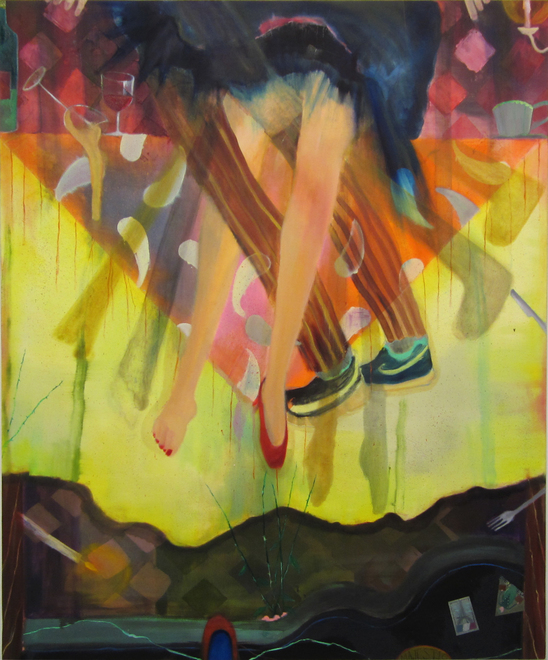 Sharona Eliassaf stands before a big canvas in her Soho studio, arms crossed. She pauses before answering my question about her newest painting: a colorful tangle of abstract forms and recognizable objects (a couple’s legs, wine glasses, long-stem roses) all swirling around one other in a gravity-defying ballet. She starts to speak but then retracts: “Actually, can we start further back?” she asks, explaining that for clarity about her work now, we should plumb where she started.

At the time of our studio visit, in mid-May, Eliassaf had just returned from Tel Aviv where she had been making preparations for a show at Braverman Gallery. Since childhood Sharona has split her time between Israel—where she was born—and New York City, where she was raised until the age of thirteen. Location has always affected her work: “At Bezalel Academy in Jerusalem, where I began painting in 2000, my subjects were stages and explosions—they were all about artificial light.” Eliassaf points to a few stacked canvases, which depict similar scenes of strobe lights, billowing smoke, and amphitheaters. “I lived in the city then, in the mountain, and I’d look down on all these lights and hear sounds echoing from the other side. I realized it was a kind of sublime.” Rather than the natural sublime of Caspar David Friedrich, however, this was a militaristic kind: “There was an intifada—an uprising—at the time, so of course there was violence and police were always around. You were sure there were things going on, but you didn’t know quite what. So with this bizarre imagery I started to do a series of paintings.” 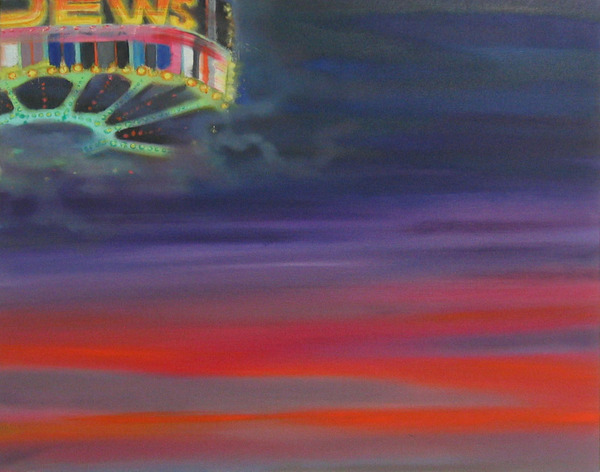 Since, Eliassaf’s canvases became stage-like spaces where she could manipulate her own sublime, weaving cryptic narratives for viewers to decode. She was on a constant hunt for imagery to include, not just from Israel but all over: “I was looking at magazines and newspapers, books, even television. I realized the common element I was drawn to was this light—which makes for images that are glossy, weird, or not really real.” For example, in one painting a Loew’s movie theater marquee is recycled as a spaceship, whose cropped banner spells out “Jews” (viewers can take what they want of that: a new exodus?).

Even now in her studio, there are eclectic magazine pages pinned up on the walls (of Nascar raceways, roller derby rinks, Kate Moss glamour shots), a tall shelf filled with catalogs (by Luc Tuymans, Peter Doig, Alex Katz), and piles of other assorted photos and clippings stacked on stools and tables. “While looking at these images I wondered, ‘Where do they come from?,’ and started unearthing the stories behind them.” Her inquiry began extending outside the studio: “I would walk down the street and hear a joke—that was a story,” she affirms.“Everything seemed to be part of something else… So I thought, ‘Okay, how do I twist these into a new world?’” 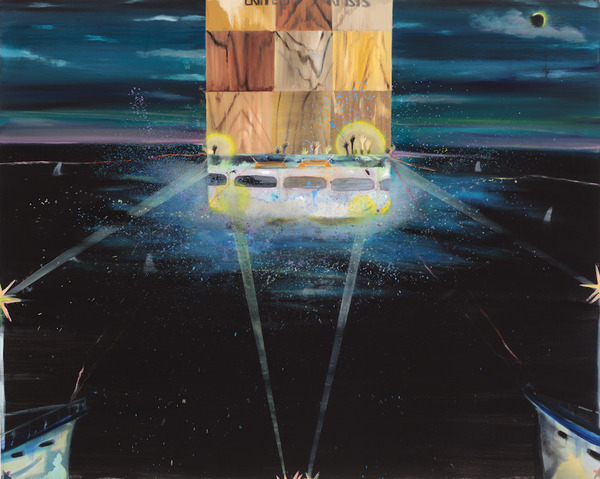 One example: Last year while finishing her MFA at The School of Visual Arts in Manhattan, news about Somali pirates hijacking foreign ships broke into Eliassaf’s paintings, appearing as the subject for a large canvas titled The Traveling Show. “I thought, “What would happen if they found crates of contemporary art? They probably wouldn’t know what to do with them, they wouldn’t know it was worth anything.”

Incongruity and ironic humor also take a personal turn in her canvases. This past summer, while at a residency at Skowhegan in Maine, she made a painting called Try Again: “It came out of my personal fear of not getting a job out of college, during a financial crisis,” she avows. In the painting, a person scratches at lottery tickets, which continually tell him to try again. The figure is sitting at a table overlooking a lake (his back is turned to the viewer, in the style of Friedrich’s Monk by the Sea), and in the sky’s constellations—right before his eyes—his future is written: “The stars are his prophet, spelling out what is going to happen, but this person is oblivious,” Eliassaf explains. She equates this to a certain existentialism she felt while living in nature for the first time, when she stopped escaping to the future or faraway current events: “I had to cope with this fantastic world, which felt like a dream—or a Stephen King novel, or a Peter Doig painting—but was real.” 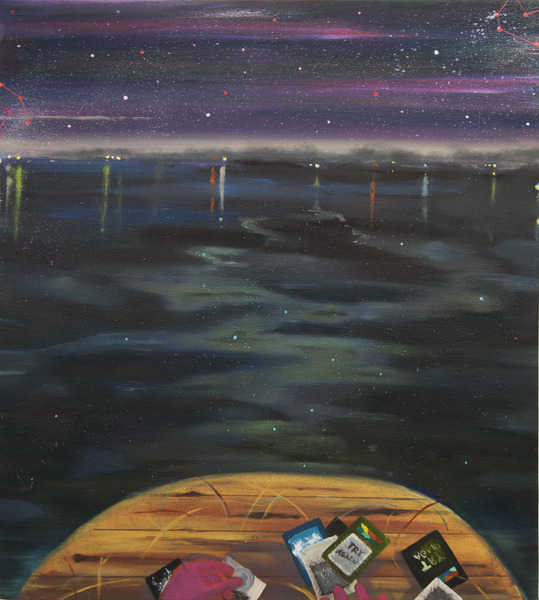 This experience has Eliassaf now questioning time: While earlier paintings had a futuristic look to them, after Skowhegan (where her paintings moved toward nostalgic) she has been wondering: “How do you build a new present, one in which incongruous things exist simultaneously?” Which brings us back to the first painting I asked her about which depicts a couple intertwined on a table during an earthquake. “It’s a puzzle about how incompatible things—here, disaster and love—can manage themselves together.” And how do they reconcile? Eliassaf doesn’t answer definitively, but says smiling: “In the end my story doesn’t matter… The viewers will see the symbols they want to, and they can decode them how they like.”

Posted by Emily Weiner on 5/31/12
RELATED ARTICLES
COMMENTS (1)
interesting article
Your article portrays the artist's work and thought process in a clear and vivid way. I will certainly follow Sharona's work and your writing too...Thanks for the insight Etty Yaniv
Comment by: rad on Wednesday 06/06/12 at 12:20 AM
ArtSlant has shutdown. The website is currently running in a view-only mode to allow archiving of the content.