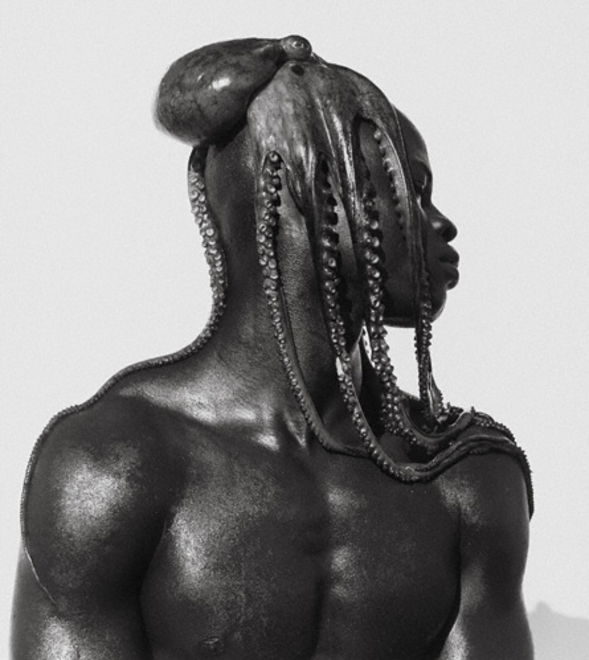 For people of a certain age, much of the imagery of photographer Herb Ritts is ubiquitous, if not iconic. From album covers (Madonna, with her head thrown back in rapture on 1986’s True Blue) to music videos (Chris Isaak crooning into a smoky cloud abyss and embracing a mermaid-like, sand-specked Helena Christensen as the waves wash over them in Wicked Game) to celebrity portraiture (k.d. lang in a barber’s chair being mounted by a negligee-clad Cindy Crawford, playing the dom) to countless print ads and magazine spreads—for a while in the late 80s and early 90s it seemed that Ritts was the go-to for a specific version of elegance and sultriness that, in its time, infused and informed the popular culture’s picture of desire.

And whether you’re on the side of the spectrum that wrote off the above as little more than glorified perfume ads (of which Ritts shot many), trading on beautiful bodies and schmaltzy seduction, or embraced them with every artery of your prepubescent, gushing heart, it’s interesting to see Ritts’s work now, these many years later, after the fact. His extremely satisfying retrospective at the Getty Center, Herb Ritts: L.A. Style, includes selections from Ritts’s best-known commercial and editorial work, as well as personal pictures with eighty-seven images in all.

What’s perhaps most apparent here is the seamless quality between the commercial and so-called “fine art” side of things. No matter the realm, Ritts’s style was cohesive with a tendency towards high contrast, sparse compositions and a limited range of emotion. The emphasis on contrast breaks down not only the designer clothes, but also skin tone and background into a bold, diametric palette. (The blacks are black; the whites, white.) In the photograph Tatjana in Swimsuit, Hollywood, 1989, the bikini that the model wears is so bright, it seems to virtually lift off her skin and float towards the surface of the frame. After all, Ritts's was a top fashion photographer; he knew how to sell a swimsuit. The oily perspiration on Tatjana’s skin, the shadow on the backdrop, the reach of her ecstatic face towards an imagined sun, gives the strong illusion she is not just in a studio in Hollywood, though, that’s exactly what good lighting in a studio in Hollywood can do.

Ritts, a Los Angeles native, favored the desert and the beach for locations, no doubt in part for their natural source of potent light and shadow, as well as for their “eternal” quality. Maybe because of this and the general retro-chic of the day, in most photographs, the sense of time is ambiguous. Ritts’s spirit decade was most likely the 1940s for his connection to the glamour and bold lighting of Hollywood studio portraiture, but he also seems to share an affinity with photographers like Man Ray and Edward Weston; the body against landscape or often, melding into a landscape, is a reoccurring motif. In Male Nude with Shell II, Hawaii, 1988, a man lays in a fetal position on volcanic sand against the ocean. His face is hidden deep inside a giant mollusk shell and the ripples of his muscular abdomen and buttocks are mirrored in the rippling of the waves-on-water’s surface. In another photo, a man holds a conch shell up in front of his face, connecting his body to the sky.  And in another, a nude man appears crouching under a crown of thorns, his face again obscured in the brush.

The ease and emphasis on the nude, and on the natural form of the body is what’s most striking in looking at Ritts’s photography now. As well as the fact that there is next to no irony, dread, deformity, grotesqueness or self-consciousness in his work (or much humor for that matter, either). Instead, strength, sensuality, self-confidence and abandon, pervade. Ritts was openly gay but closeted about his HIV positive status until his death from AIDS in 2002. While his pictures don’t speak to this directly, the plea for pleasure in and of the body seems a subtle form of reference and protest. Despite their limited range, these photographs evoke much of what was evolving in our understanding of gender, race and sexuality in the past decades and still have much potency, as it continues to evolve now.