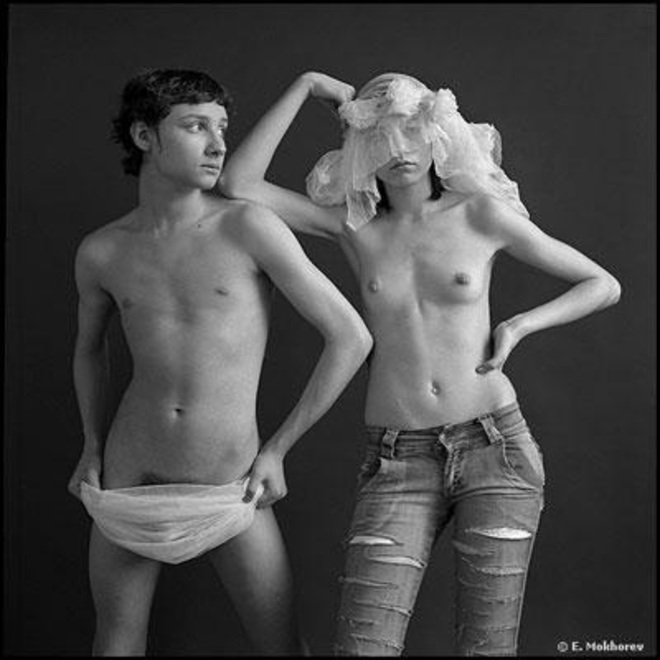 Evgeny Mokhorev’s third solo exhibition at Nailya Alexander Gallery portrays adolescents in St. Petersburg, Russia in a series of intimate black-and-white photographs created over the span of two decades. Mokhorev photographs teenagers in natural light expressing their inner worlds and sensuality through tender, playful and reflective scenarios.  In simple settings such as the corners of bare rooms and stark outdoor locations, Mokhorev reveals nuanced emotions and desires that define the experience of coming of age.

While shot from 1991-2010, the images harken back to classical elements of photography, painting and sculpture. In some of the photographs, the youth appear as statues with perfectly formed bodies in action or repose. Young men perform actions with metal structures emphasizing the elegant lines of their musculature further dramatized by light and shadow. In the photograph Ivan and Painting, the backside of a male model is juxtaposed with a painted study of a female figure, creating a mysterious play between masculinity and femininity. Mokhorev also poses a teenage boy next to a teenage girl in frank, frontal nudity.  Both are wearing theatrical masks that give the characters a surreal dimension reminiscent of Ralph Eugene Meatyard’s photographs of masked children in Lexington, Kentucky. Another photograph, Nastya and the Boys, presents a captive young woman whose arms are grasped by two faceless male figures on each side and whose eyes are covered by a third directly behind her, suggesting the fear, vulnerability and power dynamics of her youthful sexuality.

While the tension between the bodies and psyches of opposite sexes pervades the series, Mokhorev also explores androgyny and gender performance. A delicate male subject, Zhenya, wears a blonde wig and conceals the lower regions of his sleek body with a balloon. His pensive expression full of longing, he gazes across a dimly lit room where a dress hangs from a hook on the wall. Mokhorev’s boys are as pretty as girls, and some of his girls could be mistaken for boys, with their short hair and flat chests. Both male and female subjects share a sensitivity, and, in some cases, defiance. In the portrait Ivan and Nastya, Ivan conceals his male anatomy with a white cloth, while a bare-chested Nastya poses irreverently wearing a pair of torn jeans and a bridal headdress casually draped over her eyes. 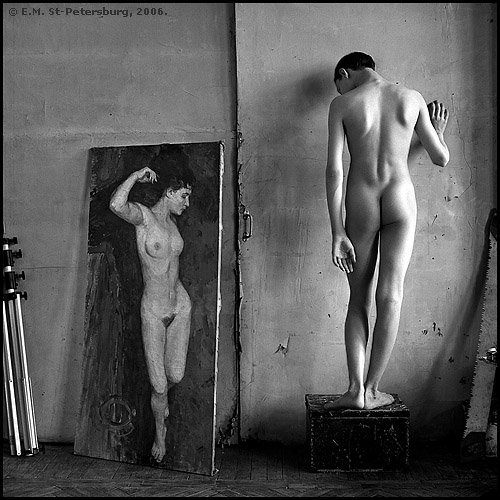 Like Francesca Woodman, who obsessively investigated her own complex interior life as a young artist through self-portraits and whose retrospective is currently on view at the Guggenheim Museum, Mokhorev makes use of window light, curtains, mirrors and decayed walls to create a similar mood and texture in his photographs. Both photographers focus on young bodies in relation to space and the psychology of their subjects. But while Woodman almost exclusively photographed herself and her photographs have become only more haunting since her suicide in 1981, Mokhorev’s portraits speak of an empathy and fascination with his young models. That the images convey the interplay of innocence and explicit sexuality is no small part of what makes these photographs seductive.

Under the Radar: Isabelle Schneider | Amanda Ramsay | Lauren Singer
11/16/18
COMMENTS (1)
HELLO
nice capbility and porformance
Comment by: Asharaf Elshrif on Sunday 05/06/12 at 9:51 PM
ArtSlant has shutdown. The website is currently running in a view-only mode to allow archiving of the content.