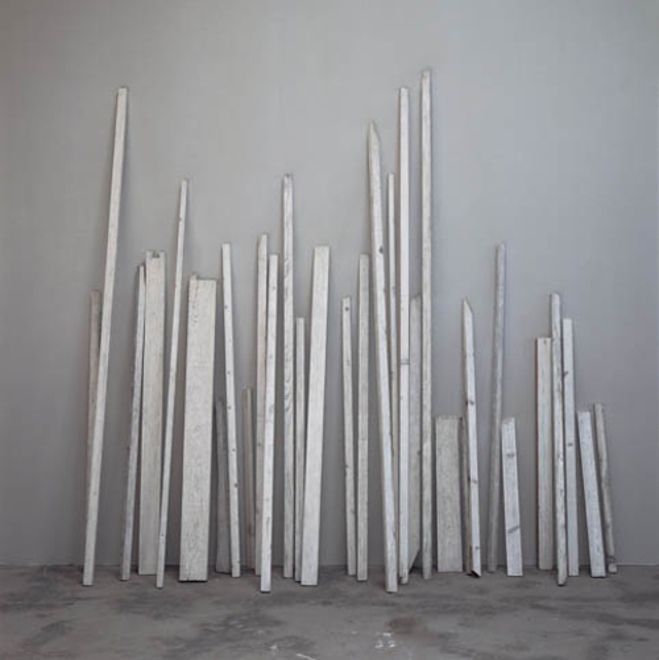 The Overlooked and the Unmentionables

By now both the New Museum’s Triennial and the Whitney Museum’s biennial have been open long enough for the critical voices of the popular press and blogosphere to have weighed in on the virtues and shortcomings of these highly anticipated exhibitions. I’ve been to both, though rather than add another idiosyncratic opinion to the heavily populated mix I decided to take a cue from the nature of the exhibition itself, and survey the critics.

The nature of my looking wasn’t qualitative; I wasn’t too concerned with positives and negatives, though I was surprised at the enormous amount of criticism that merely rehashed wall texts. Instead I set out to do a quantitative assessment; what I wanted to find out was which artists the critics overlooked. Of the eighty-six participants in these two major surveys, who went largely unmentioned?

There isn’t a single performance artist who did not garner at least a sampling of critical recognition; it is object makers and interventionists that have occupied the media’s blind spot. Maybe no one saw (or couldn’t find) Gary Ross-Pastrana’s  Balloon (2012) at the New Museum, or John Knight’s Curb Appeal (1966/2012) at the Whitney. Neither piece is entirely inside the museum, nor are they exactly outside it. Both are peripherally situated in the threshold space between these twin poles, right smack at the entrance of each museum.

I admit when I first saw Ross-Pastrana’s piece I mistook it for soap scum. Balloon is a smattering of silver dust on one of the wall-size windows that looks out from the New Museum’s lobby onto the Bowery. It seems as ephemeral and fragile as the wispy head of a dandelion, as transparent as a spider’s web in soft light. Like Knight’s piece, Balloon is the only work in the exhibition that you don’t need a ticket to see, which makes it the Triennial’s least exclusive contribution by default. Even the wall text can be read from the sidewalk. Talk about skirting the authority of the institution, Balloon may be the only ungovernable work in the entire show.

One of two wall texts for Knight’s work is similarly adhered to a stone pillar at the entrance of the Whitney, a space which for Knight is the “sentimental moment” of Breuer’s entire museum. Curb Appeal, as the title suggests, refers to the attractiveness of a building’s exterior.  It may be a functional enhancement, but it can also be purely decorative. For Knight it is both, his architectural intervention includes a bronze hood for the scupper and a “rain chain” in the downspout. The work is listed as being in the sculpture garden, though a truer statement might describe it as being part of the sculpture garden so thoroughly and naturally does it integrate into the design of the museum. 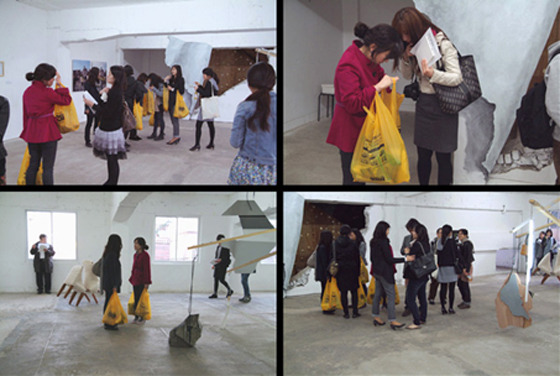 The two most visible artworks to slip by the critics are John Kelsey’s weird concrete poems, Depesrsion and Impoetnce (2012), presented as inkjets mounted on aluminum, and Bona Park’s one-page questionnaire, The Box in a Plastic Bag (New York version) (2012). Considering both are essentially about human interaction, the silence that surrounds these two works is a borderline paradox.

I wonder if anyone noticed Park’s piece, which (according to the wall text) actually occurred during opening night. The questionnaire, which is the only document on view, focuses on one’s dining habits. Park issued these to the museum’s staff and then bought groceries for the participants according to their replies, which they apparently carried around in matching bags on the night of the opening.

Arguably, Park’s is another “ungovernable” work in the Triennial insofar as it is exceedingly generous to those who come to the museum for work while being exceptionally stingy and unforthcoming to the museum’s patrons—99% of whom were not invited to the exhibition’s opening. However it could just as easily be seen as catering to the 1% that was invited: the artists, curators, trustees, etc., who may have observed all the bags of food and been intrigued. In that case Park’s gesture might be interpreted as cheeky showmanship, relational aesthetics performed by the working class for the viewing pleasure of an elite few. However one reads into it, it’s one of the prickliest works in the triennial.

Kelsey’s poems are the linguistic equivalent of broken things you don’t want, but can’t help giving time too. His raw material is email spam, whose subject is about curing the work’s titular ailments: depression and impotence.  A list of names, alphabetically organized, runs down the side of each piece—these refer to the senders of said junk mail. None of this is obvious in the work itself.

Perhaps surprisingly, it is this very opacity that makes Kelsey’s work successful. As I read the poems and names, with very little sense of what it all might mean or how it fit together, I began to feel intellectually impotent, which leads quite naturally to depression. That relief from such grief would come from strangers in the form of junk mail is magnificently absurd.

Another piece that the critics missed is Hu Xiaoyuan’s Wood (2009-2012). In my opinion it is the most necessary work on the second floor of the Triennial; without it there is hardly a quiet moment. It’s the only piece that doesn’t cry out for attention, and the singular effort (arguably in the entire exhibition) that balances a carefree disposition with a rigorous work ethic exercised over a significant duration of time. Wood is also simple and self-contained, one of very few works in either exhibition that doesn’t need any accompanying text. Pieces of wood are covered with silk upon which the artist has painstakingly painted the wood’s grain. These finished pieces lean against a wall in a most informal arrangement. The sense of order in the installation of Xiaoyuan’s Wood is the same as one might find on a forest floor, which is to say it seems natural.

I see these five pieces as the outliers, the works consistently avoided, or perhaps altogether unseen. They may not be the best or the worst pieces in their respective exhibitions—a trivial debate to say the least—but they have become something the others have not. When the same artworks capture so many different people’s attention, then that work which eludes it becomes more interesting, more captivating and enigmatic, at least for me.