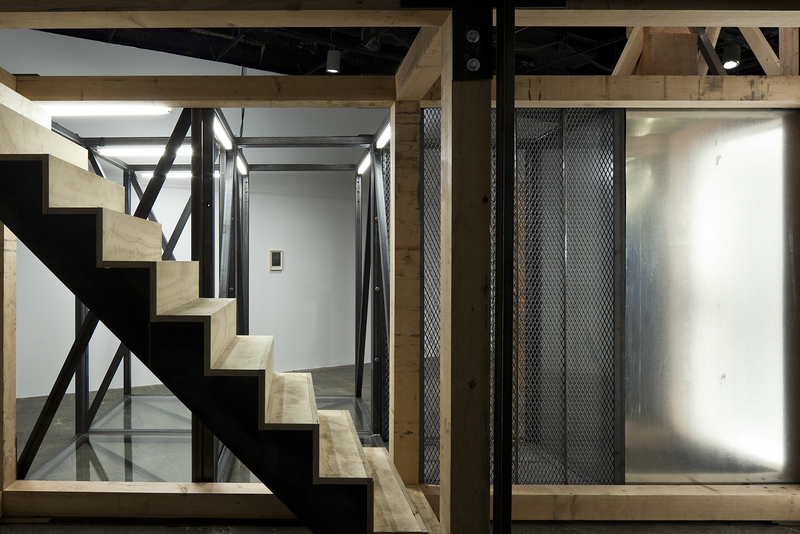 “Be advised that the fourth floor galleries will be closing in about fifteen minutes for Sarah Michelson’s performance,” I was told when I arrived at the Whitney ticket counter, “So you should probably begin your visit there.” Yeesh. Fifteen minutes for an entire floor? I’d better hurry, I thought, as I dashed to the elevator.

On the fourth floor, one of Michelson’s dancers was warming up, stretching her limbs out with a couple quick pas-de-bourrées over the dance floor—a site-specific work in itself: the architectural plans for the museum were painted on the floor, dance floor as map, as blue-print. Watching the dancers warm up before their performances was a part of the piece, I gathered, but wondered why the gallery had to be emptied of visitors two hours before the actual performance. Warm ups we could watch, but not rehearsals? No chance of getting a ticket to the actual performance—all tickets had been reserved for weeks now. (I later ran into a couple of friends in the café a couple hours later who were waiting on stand-by for tickets. I’m not sure if they got in.) I felt sort of bad for the other artists whose artworks were installed on that floor as I was ushered out by a rather stern looking, non-plussed museum guard.

I spent the rest of my visit to the 2012 Biennial alternately looking at art and being scolded by the museum guards for various boundaries I was apparently breaching. This iteration of the Whitney Biennial promises the “breakdown of boundaries between art forms” in its radical agglomeration of artists working in disparate fields, not only in visual art, but in music, performance, dance, and film. This breakdown of boundaries makes this Biennial an ever-changing, fluctuating three-month-long event that will look and feel different for each visitor on any given day, but also breaks down the boundaries between viewer and art object, installation, performance, what-have-you. This presents the visitor with unique challenges, equivocations, hesitations and confusions regarding the works of art and their thresholds and borders, not to mention the aggravation added to the duties of the museum guards.

On the third floor I opened a door into Nick Mauss’ curious, charming installation, then reached out to feel the sumptuous mustard-yellow velvet tapestry lining the door. “Please, ma’am, don’t touch,” I was warned. Ok, so I can touch the door handle but not the wall? I sheepishly retreated. 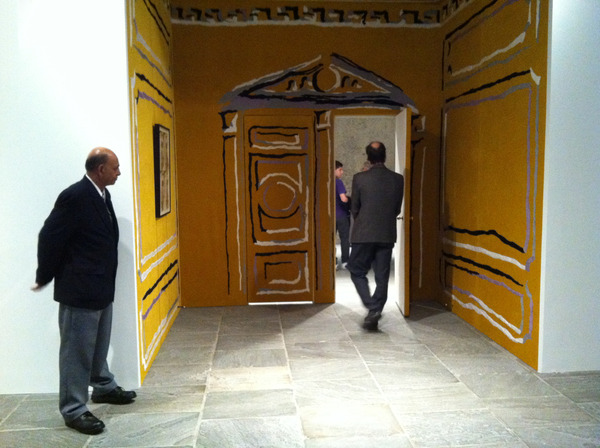 Sam Lewitt’s installation of ferromagnetic liquid was similarly policed. The black liquid spread over sheets of plastic, congealed over magnets, forming extraordinarily mercurial spiked balls, like little minesweeper mines, their liquidity revealed by small oscillating fans. The bizarre properties of this fantastic stuff required a really close look. Someone was inadvertently stepping on one of the fans’ electric cords, and the guard called his attention to his misstep. “Please step away sir!”

A few feet away Dawn Kasper was conversing with visitors in her installation, her studio transposed into the museum, replete with a bed, stacks of vinyl, papers, artworks, books, her laptop, and sundry other things. I walked through a pathway in her cluttered Nomadic Studio. I rifled through some of her VHS tapes; I’m not sure if I was supposed to do that. 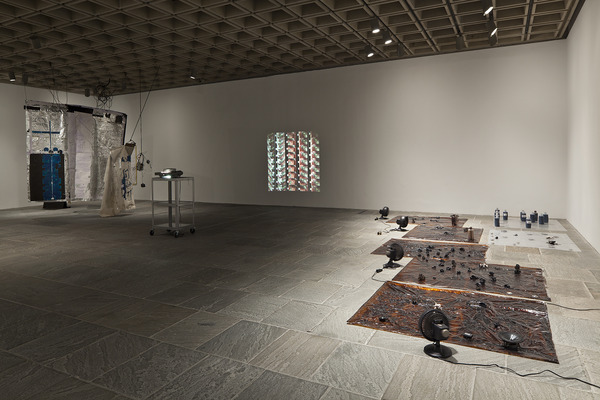 Most people know how to act (at least nominally) in museums. You don’t touch the paintings or sculptures. (In the crowd at MoMA’s Tim Burton show, however, I realized how many attendees weren’t frequent museum-goers as I watched them confidently handle the objects, dragging their fingers along the costumes and sculptures. The guards looked exhausted from calling them off. What a nightmare.) But in a show where the artworks overlap and spill into the museum space, where museum becomes studio space, or science experiment, things can get a little complicated. It feels very free-wheeling, but I soon realized those borders between viewer and object are still there, policed by the ever-vigilant guards, or by subtle sandpaper lines stuck to the floor scuffing the bottoms of your soles as you approach the invisible line between acceptable looking and craning too far.

In the lobby, at the end of my visit, I walked around and through Oscar Tuazon’s architectural sculpture, For Hire, a “formless tangle” comprising a staircase, a few doors, pathways, and room-like spaces. It seemed like the first construction stages of what would become a cheap apartment complex. Another visitor headed up the stairs—the museum guard protested. “Sir, please come down,” she stated exasperatedly, “you can’t go up there!” I had already been warned enough—I knew not to step on the stairs. I wandered a little bit more through the acceptable spaces of the installation, opened some doors, walked through some pathways. I approached the stairs, with no intention of walking up them, but the museum guard immediately called me back. “Please, ma’am, you can’t go there.”  I smiled and looked over at her. I could tell she had been saying these same words over and over again, warning the same warning over and over.

“This is your whole day, huh?” I asked her, “telling people not to go up the stairs?”

“Eight hour day, telling people, don’t go up there. You get to the top, but there’s nowhere to go!” She laughed.

In Conversation: First Impressions of the 2014 Whitney Biennial Group Exhibition
3/6/14

A Biennial Timeline
3/25/12
COMMENTS (0)
ArtSlant has shutdown. The website is currently running in a view-only mode to allow archiving of the content.