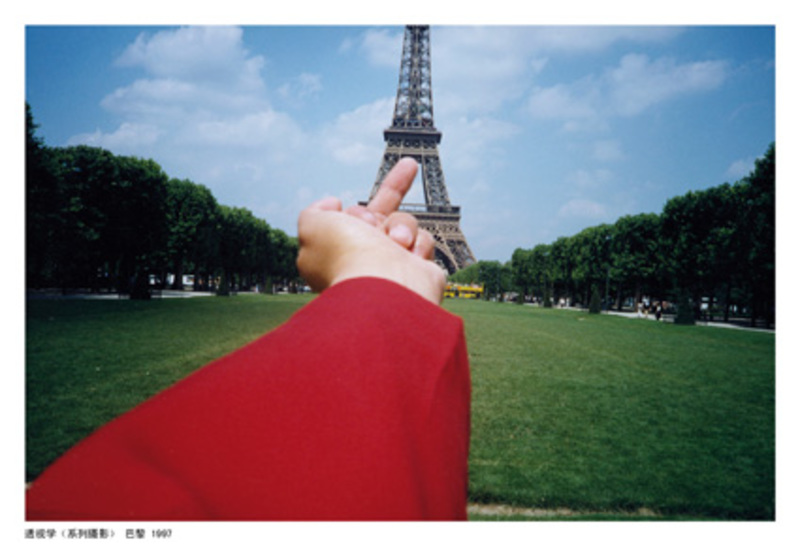 This exhibition is a great introduction to the controversial work of Chinese political art superstar, Ai Weiwei. I was skeptical, and given the intense publicity around Ai Weiwei, we should all be skeptical. When an artist who attracts this much hype for his vociferous attack on governmental regimes and global capitalism exhibits at the Jeu de Paume, there’s every reason to be dubious.

Ai’s work is copious and the artist is prolific, unsurprisingly given his Duchampian belief that art is life. One of the wall texts in the room that included his blog photographs bemoaned the fact that so many of Ai’s photographs were confiscated when he was imprisoned in 2011, but that fortunately, many of them still existed. While it is indeed a great misfortune to have lost his images, given the prolificacy of his production, I did wonder if he himself would be so upset to see his photos seized? Afterall, none of them are aesthetic treasures, and it seems as though he will continue to refill the void with his limitless supply of photographs of everything he sees and does. Not only is his aesthetic deliberately in search of an anti-aesthetic, one which confronts and prohibits any possibility of desire or consumption of the image, but it is throwaway; there is an impermanence to the hundreds and hundreds of photographs he takes of everything and everyone in his path. When authorities confiscate or destroy Ai’s pictures, they inadvertently idolize what are otherwise empty images. 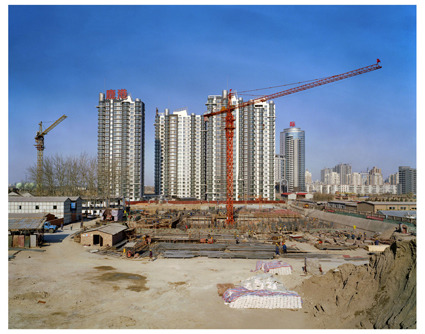 Ai Weiwei, Provisional Landscapes, 2002-08.
The exhibition claims to introduce the variety of Ai Weiwei’s work, but really, it’s a photography exhibition with some video screens showing images that document the blogs, films, sculptures, interviews and architectural works. Among the most interesting series were those photographs of the New World Order, otherwise known as contemporary China. Whether in the “Beijing photographs, 1993-2002,” the “Provisional Landscapes, 2002-2008,” or “Earthquake, 2008-10,” Ai draws on the conventions of, for example, landscape painting, and empties out the conventions and the content to reveal the rubble and ruin of this New World. If the foreground of a classical perspective landscape painting leads us towards the possibility of a horizon that will allow us to dream and to yearn, in Ai Weiwei’s landscape photographs, the foreground is uninviting, a wasteland across which we have no desire to walk. And in the background, all we see is an (im)permanent disaster: buildings apparently suspended in a state of incompletion, money being wasted, lives being spent with ultimately nothing to show for any of it. Like the expendability of Ai Weiwei’s photographs, the landscapes and cityscapes of modern day China are here today, gone tomorrow. It’s a world in which the turnover of buildings and capitalist monstrosities are as common as the buying and selling of consumer goods. What we don’t see in Ai Weiwei’s photographs, but we know must be there somewhere, are the literally millions of people who neither make it into the photographs nor who have no identity in the nightmare of Capitalism gone crazy under the dictatorship that now lies at the centre of global capitalism. And all this caught by a photographic anti-aesthetic which replicates the pollution-filled skies of China’s great cities: bland, blurred and unappealing.
In “Study of Perspective, 1995-2010” in which he photographs the world’s famous cultural institutions and monuments, its most iconic cityscapes and landscapes, Ai “desecrates” the iconicity of the symbol and our vision by seeing from an unflattering perspective, by blurring the image, or by placing it off-centre, and then having the gesture of “giving it the finger” fill the foreground. In these, Ai extends his critique of China by denouncing the history of Western culture. This is a history that, when we see the Roman Forum receiving the finger, we recognize has been revered for thousands of years. And so, not only does the critique extend outwards to the whole Western world, but it extends backwards to the historical past. 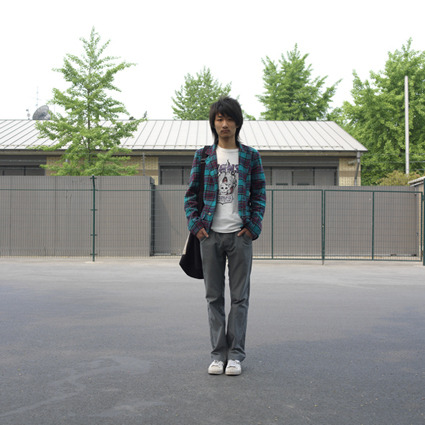 Ai Weiwei, Fairytale Portraits, 2007.
Also powerful were “Fairytale Portraits, 2007”, individual portraits taken of the Chinese people Ai would take to Kassel for his installation at Documenta 12. Each individual is given his or her own photograph, but like the regime that subjects them, each is made anonymous in Ai’s portrait. Each person is placed at an identical, full frontal distance from the camera, with one or two exceptions, standing in the same pose, one after the other after the other. The repetition of the photographs as they are laid out on the wall turns the images into documents that surely draw on the conventions of a totalitarian regime’s exigency to anonymize existence. Moreover, what is more noticeable here than in any other of the series is that Ai’s photographs are not about him. Even though he engages with the modernist techniques of repetition, standard compositional principals, rendering the portrait sitter as anonymous subject, Ai’s photographs bear none of the self-absorption of the modernist artist. Rather, he uses these strategies as a means to efface his own identity: repetition, de-aestheticization of the image, the pose and composure of the one being photographed not only underline the anonymity of the person before the camera but they efface any pretence to greatness of the one behind it. 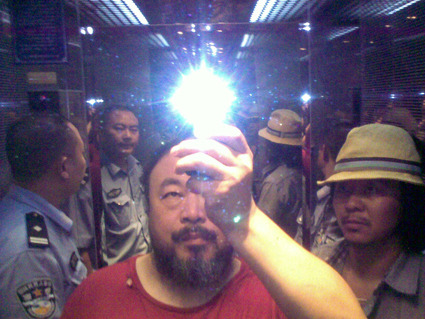 Ai Weiwei, Ai Weiwei with the rockstar Zuoxiao Zuzhou in the elevator under surveillance by the police in Sichuan, China, August 2009.
While I was mostly impressed by the exhibition, I was unconvinced by the placement of the blog entries and photographs on wall-mounted screens. The turnover of images was so quick that it was impossible to focus on any of them, and when the bog texts appeared, they passed by so quickly that I rarely finished the English texts. I didn’t even try to read the French ones. I am not sure how the French audience fared – if they had more success reading the texts and, most importantly, taking in the terse political attacks. But the real problem with the display of the blog texts and photos was the invitation to ogle as if at art works on clean white walls, when really they are meant to be seen on the web, a medium in which we have control over our own viewing process.

Ai Weiwei, Dropping an urn from the Han Dynasty, 1995.
I did leave satisfied with the glimpses I had of Ai Weiwei’s complicated and unusual, not to mention prolific output. But given the images of sculptural and architectural works in the blog photos, as well as in the bookstore catalogues, I know this exhibition only begins to introduce his work. Nevertheless, given the hordes crowding the gallery spaces and the long line of people outside waiting to join them, I am assuming he has quite a following in Paris and we are definitely going to be seeing Ai again in the not too distant future.
—Frances Guerin