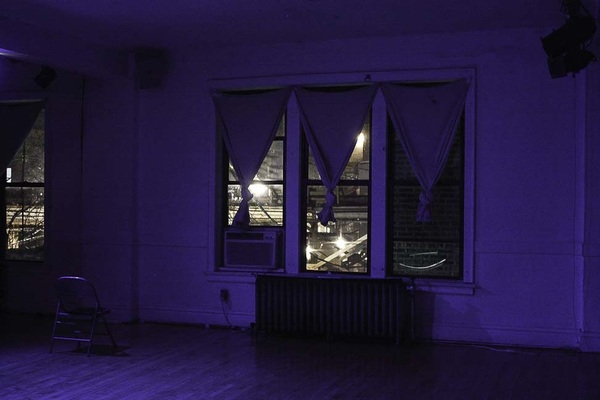 We are standing outside on the street late at night in February trying to figure out how we’re going to realize our project, which is to be on view to the public in three days. To complicate things further, I speak no Spanish and my counterpart, Carlos Martiel Delgado Saínz, speaks no English. This is a typical exchange that has made participating in Arte No Es Fácil such a challenge and excitement. In Cuba you can get plenty of people to come help with something in a few hours notice. In America, you need at least a week, especially if it’s a Friday.

Arte No Es Fácil is the work of Danielle Paz and Marilyn Volkman. As graduate students in the University of Chicago’s Departments of Visual Arts and Art History some of my colleagues, including Paz and Volkman, traveled to Havana, Cuba, in 2009 to document the Havana Biennial. The trip evolved far beyond the initial documentary into a project that now includes, among other things, a series of exhibitions in Chicago at Links Hall. While a creation of Paz and Volkman, it involves dozens of artists working in many disciplines.

Arte No Es Fácil, translates to “Art Isn’t Easy.” This title was adopted after the original group experienced the struggle just to accomplish even the simplest tasks in Cuba. But out of this has grown a unique spirit of collaboration and a collective effort, specifically in relation to art making. Arte no es fácil. A meaning everyone involved in the project has come to understand on many levels. Like most arduous journeys, it’s been incredibly rewarding and worthwhile.

I cannot begin to fathom what this must be like for some, though. When Hamlet Lavastida Cordovi first traveled to the United States, he was asked the question all Cubans entering the U.S, are asked, “Are you here for a visit or do you seek asylum?” The question had not even occurred to him until that very moment. Without hesitation he responded, “Asylum.”

When preparing for this essay I asked him if it was alright to tell his story and if I should not use his name. His reply: “Don't worry you can use my name as you want. When I come here I decide to refuse to participate in a tyranny, that’s real!!!!!”

The program at Links Hall has taken place over three weekends in three months: January, February and March. This weekend marks the culmination of this phase of the project. Arte No Es Fácil continues, though. There are plans to produce a catalogue of the Links Hall exhibitions and the process of organizing a sister event in Havana in 2013 is underway.

Collaboration is the key to the project. After the initial documentary was completed Paz and Volkman were dissatisfied. They had failed in their eyes because what they created was an image, a representation, rather than an open form of communication.

“We started to see similarities between the practices of emerging Cuban artists we met in Havana and the work of artists we knew in Chicago. We thought, ‘If we know artists making work separated by location and context, yet sharing a resemblance in form, what would these modes of working look like when collaboratively translated from one context into the other?’” Volkman and Paz explain in a statement on the project’s website. 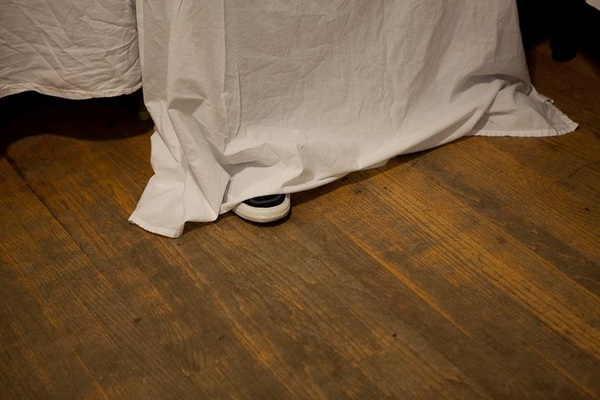 I was paired with Carlos. How do you begin to have a conversation about making a work of art with someone you’ve never met? We began communicating through email when I was living in Berlin, Germany, and Carlos was in Havana, Cuba. We faced not only an eight-hour time difference, but also a delay in sending our messages through an intermediary to translate. Additionally, access to email and the internet is sporadic in Cuba. We went back and forth, using Google Translate as a workaround. You tweak the sentences, sometimes word by word, and eventually end up with a message that makes just enough sense to be confusing to the recipient.

Being in Germany and Cuba respectively, neither of us could visit the site in Chicago where we were planning to realize our piece. Carlos suggested a performance that was incredibly simple but which we spent the next few months trying to explain to each other. It wasn’t until December that I suddenly realized what he had actually been proposing. And it wasn’t until I returned from Berlin and could visit the site in person that I knew it wasn’t feasible based on Links Hall’s architecture. And it wasn’t until he arrived in February and saw Links Hall in person that he could understand what I had been trying to explain. It’s kind of brilliant in its Beckettesque futility. It was a few days before the night we were to present our piece and it was back to the drawing board.

In the meantime, for the weekend in January, we presented separate but related works. Carlos’ piece Invasions is a sound installation of audio recorded of the street noise from his window in Havana. We presented it for him in his absence. The interior space of Links Hall was dimly lit in blue and as the audio came up from a speaker in the dark alongside the windows, I drew the curtains to reveal the Chicago alley, theatrically light in yellows and oranges by the streetlights. The El tracks just a few hundred feet away thundered with the occasional train. Every time someone walked into the alley they were like an extra in a film. Presented later in the evening was my piece, Drei Jahre in einer Linie / Three years in a line, a composition made of audio recorded, often by chance, during the three years I have spent time in Berlin. While Carlos’ piece focused on exteriority, drawing the viewer’s attention outside and replacing the local sound environment with that of another city, my work used sound as a way to tell a narrative and sought to draw the audience inward toward their own conceptions of a city heard but unseen. With the curtains down and a dim spotlight, the atmosphere was more along the lines of a classical music concert.

Back to February. We are hanging around Links Hall amidst all the other activity of artists preparing their works and Carlos pulls up his Word document of ideas for artworks on his jump drive. I have my list of “Art Ideas” on my iPhone. He starts reading them off. Scott Waitukaitis, a scientist and Marilyn’s husband, translates. We agree on a piece that involves covering the furniture in the office with white sheets the way you might when someone vacates a house or you’re storing a deceased relative's possessions in your attic. The room will be open as people file into the theater space of Links Hall. The catch is that an unseen performer will be among the furniture, an object himself under a sheet. 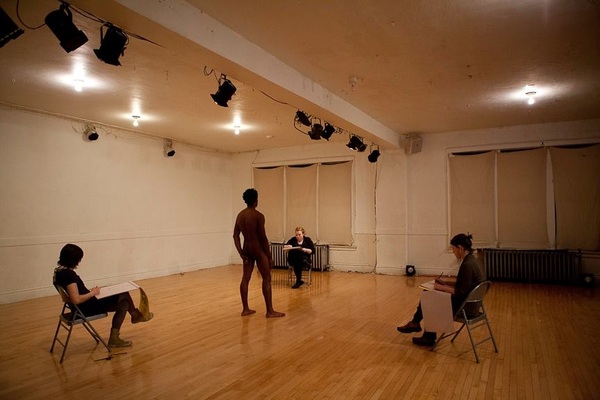 It’s Friday, the audience is directed down the hall to the room transformed into a ghostly sculpture. Some enter, others, unaware it is art, shuffle past and enter the theater. Three women sit around a nude man, sketching him. He goes through a series of poses. Later viewers would describe to me the uncomfortable sensation of watching people draw. “When you’re gazing at a naked man to draw him it’s a different kind of looking; you are studying. When you are in the audience, watching it feels wrong; it is like voyeurism,” explains one. Carlos, of Afro-Cuban decent, is the nude model. The young women are all white, a detail I was pleased to make happen.

What a great action, reversing the male gaze by placing clothed females in a circle around the sleek form of a bare-naked male. It is also problematic in an interesting way that it is the non-white, the other, who is being held up as an example of beauty, but also something to be consumed by white European Americans. At least this is what I think is happening; I am under a sheet in the other room. For once the white man is marginalized and obscured. I sit there for ages, a prop in our performance installation until someone comes up and says, “Carlos says, ‘you’re done. You shouldn’t have to sit here suffering while everyone is in the theater.’”

In the end we found people. Arte no es fácil, but it’s worth it.

Posted by ArtSlant Team on 3/17/12
Tags: performance
ArtSlant has shutdown. The website is currently running in a view-only mode to allow archiving of the content.