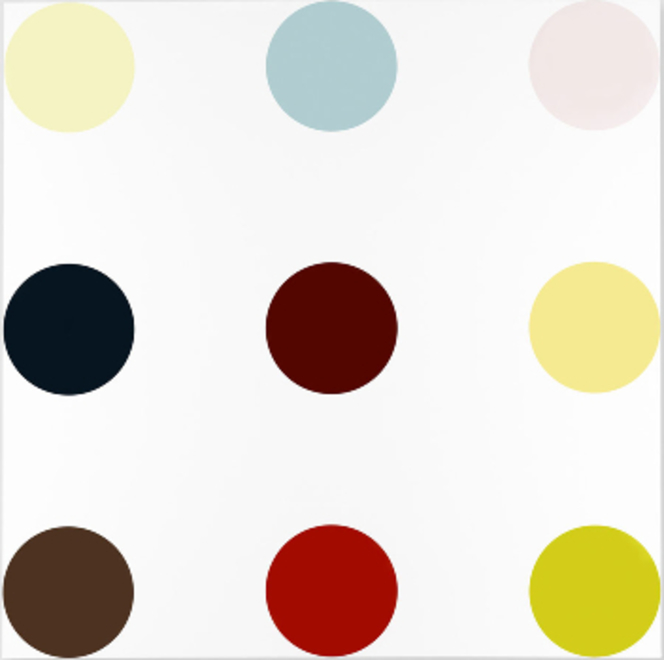 by Frances Guerin
When I walked into Gagosian Gallery’s recently opened Paris space, one street back from the city’s most imposing shopping stretch, the Champs Élysées, I felt as though I had come home. In the light drenched space, made brighter by the gallery’s clean white walls, I was surrounded by paintings. And they are paintings that, for me, demonstrate contemporary art at its most brilliant and exciting. Here, on the pulse of the tourist hub, a stone’s throw from the Élyssée Palace is the Paris episode of Damien Hirst’s global extravaganza: Damien Hirst, The Complete Spot Paintings 1986-2011. I am completely seduced at the same time as I fight for space inside these white walls filled with all the usual drama of a Hirst exhibition.
Everything about this exhibition and the worldwide extravaganza that is The Complete Spot Paintings could not be further from French if it tried. The paintings and the exhibition alike are loud, noisy, big; the Hirst ego in cahoots with the Gagosian ego create a ruckus the French would look askance at. And yet, The Complete Spot Paintings are about painting. Hirst has taken over all the Gagosian galleries around the world. So no matter which of the great cities you go to, Hirst will be there: New York, Los Angeles, Rome, Athens, Paris, London, Hong Kong, Geneva. 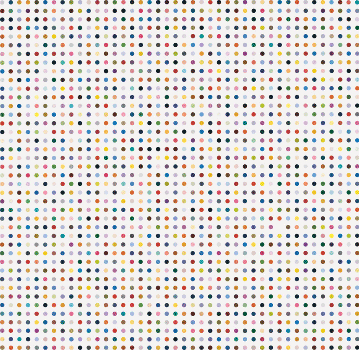 Damien Hirst, Cupric Nitrate, 2007; Courtesy Damien Hirst/Science Ltd., 2012 / Photography Prudence Cuming Associates
If I describe them, or even just look at images in reproduction, there is very little to get excited about. But in the flesh, these different sized canvases filled with different sized, and varied numbers of spots, some falling off the canvas, some tightly regulated by its edges, each spot otherwise apparently identical to the next, are extraordinary. Each canvas is apparently identical to the next, but in time, it emerges that each has a different personality, a personality formed not only by the colour of the spots, but by the colours in juxtaposition, by their density on the canvas, by the size and distribution of the spots. And so, as the spots are all about control, order, containment and regulation, everything is subtended by unpredictability, chaos even. 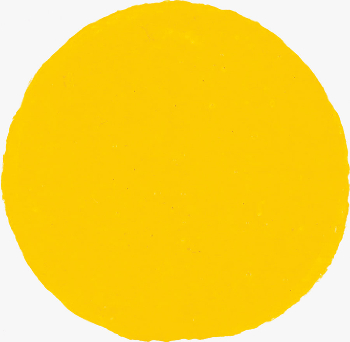 Damien Hirst, 1-Bromododecane, 1996; Courtesy Damien Hirst/Science Ltd., 2012 / Photography Prudence Cuming Associates
In concert, Hirst’s spot paintings reveal themselves as being about everything and its opposite. They are about painting, because they are painting reduced to its most fundamental property: colour. They are about painting because they are no more and no less than the interactions of colour on a canvas. And yet, painting is effaced in the mechanical-like production of perfect spots. Of course, the spots were not always perfect but as Hirst himself admits, they have become more and more perfect as the years pass and his assistants come to “manufacture” them.
Hirst is the Warhol of our day. He may be without wig and without parties, but he is artistically, and conceptually, the descendent of Warhol. Like Warhol Hirst openly admits that he does not make the paintings himself. That’s just the point. The conception may be his, but the actual putting of paint on canvas is done by his assistants. For Hirst, reproduction is not a problem, it is the very fabric of art. And for Hirst, art is defined by repetition, endless, limitless repetition in its simultaneous imitation and critique of the market forces that make it possible.
I have always associated Hirst with Thatcher and the end of the 1980s. I have always thought of his work in the same breath as that of Peter Greenaway. And if I think of Greenaway and colour, I think of The Cook, The Thief, His Wife, and her Lover, a seering critique of Thatcherism made in 1989. There is something about the impossible perfection of the spots, their being framed by the white canvas, and then at times, testing the edge of the canvas by running along its edges from which I infer that inside every neatly packaged and ordered universe, chaos will reign. Like the few examples in which the spots fall off the canvas, the paintings  reach beyond into the world to throw light on the structures that frame, the breaking away from the systems, the logic, the classifications that spots, random or contrived, are subject to. 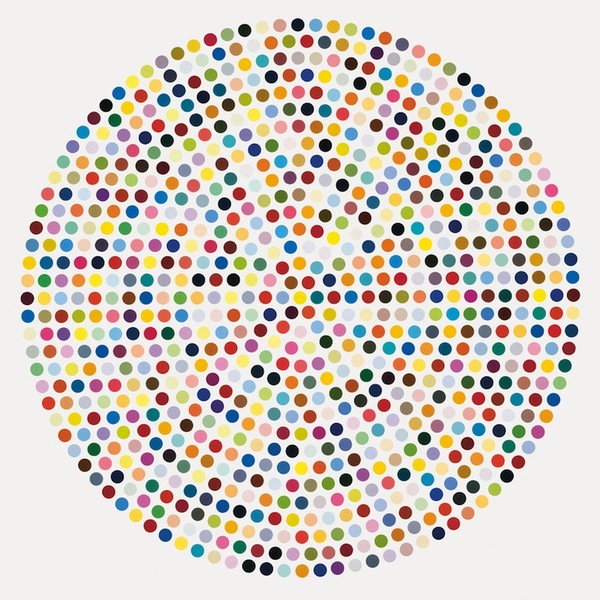 Damien Hirst, Zirconyl Chloride, 2008; Courtesy Damien Hirst/Science Ltd., 2012 / Photography Prudence Cuming Associates
Each page of the small booklet that accompanies the exhibition is headed by a quote from Hirst. On the page devoted to the Beverly Hills Gagosian, Hirst is quoted as saying “The grid structure allows no emotion.” This is, in many ways true: the paintings are coloured spots effaced of the gesture of the human hand, otherwise known as the brushstroke. But there are other levels that pulsate with emotion. For us, the viewers, as much as to be surrounded by Hirst’s spotted canvases is to be seduced by them it is also extremely difficult to stay focused for longer than a few seconds. As we start to find patterns, look for repetitions of the colours, at a distance, the spots in repetition blind us, like op art, producing a persistence of vision. The works perform an iconoclasm in its most insistent form when they ask us to turn away to avoid nausea. And the feeling of confrontation is all made worse by the blinding white walls of Gagosian, the same walls that had offered me an oasis of luminescence in the middle of Paris.
I must say, even though I am excited that Gagosian has expanded its empire to Paris, and excited to have seen and experienced at least one chapter of The Complete Spot Paintings, I left not only blinded by spots dancing on pristine white canvases, but filled with “Gagosian envy.” I couldn’t help wondering if the other cities got better examples of the spots? Madison Avenue had some of the earlier canvases with dripping spots on slightly yellowing backgrounds, London exhibited the odd shaped canvases and the single spot painting, and Los Angeles the series of spots. Then again, like all good Capitalist institutions, I guess this is the intention: to lure me into a world tour of Damien Hirst’s spots.

Posted by Frances Guerin on 2/23/12
RELATED ARTICLES
COMMENTS (0)
ArtSlant has shutdown. The website is currently running in a view-only mode to allow archiving of the content.