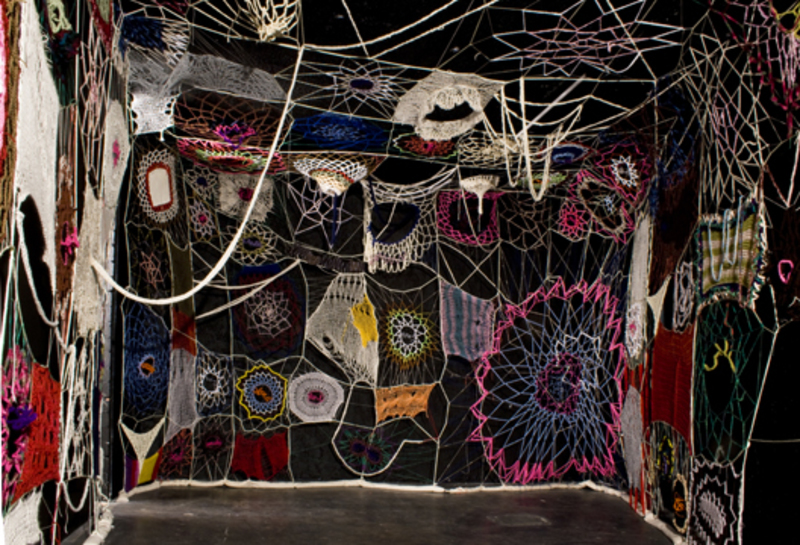 Through the storefront windows, the yarn web gives the impression of something more baroquely layered, denser and less penetrable. My first thought on this collaboration between Alexandra Grant and Channing Hansen was that I wanted something more absorbing and encompassing than this merely skeletal suggestion of an interior within an interior drawn flimsily over the gallery's literal black-painted brick perimeter. Given the show's title, I wanted something more expressive of the annihilating desire to return to the maternal expressed in the overwhelming and womb-like sound environments of black metal and some noise. By contrast, this seemed more like a cobweb, residual, rather than something I could lose myself in long enough to fear or long for a lurking spider.

In my anxiety, however, I forced myself to look closer. Arranged in a loose grid, some of the woven panels that comprise the piece’s form, in their centers, tight-knit orifices containing single words spelled in pipe-cleaner cursive, ominous imperatives like “kill” alongside general notions like “taste” or “lust.” Yet rather than providing some way into the work, these holes, and their allusive but resolutely ambiguous content, further emphasized the way in which everything seemed to be already exiting this mesh. It was then, against my expectations, that I came to feel that this was its truly and effectively sinister dimension—invoking the guilt economies of both craft production and motherhood, the terror of the work lies in how little refuge one can find in it. At every turn, even against the explicit enticements of the intricacy of its composition, the troubling transparency of the overall structure endlessly births one's lines of sight into the isolated mundanity of the commercial architecture that houses it.

The experience of traumatic abandonment Grant and Hansen's piece evoked is nicely complimented by Vancouver-based artist Devon Knowles' light sculptures, which are all but invisible on first blush. A series of six shin-length triangular prisms hung at waist height, the structures contain LED lights visible only when reflected by internal mirrors, a phenomenon that happens only at oblique angles to the viewer. The work thus insinuates itself subliminally. Confronted head-on, which I attempted only after being told of its existence as a separate piece by gallery staff, it reveals nothing of its composition, remaining stubbornly inert, almost completely concealing the orderly columns of white, blue, red, and green dots that I had noticed, but not registered, from peripheral vantages. Simultaneously involuted and extended throughout the space, Knowles' piece suggests the omnipresence of surveillance technology, its formal properties mirroring the ever-expanding reach of a dehumanized and increasingly covert gaze.

The exhibition's final offering, a sound piece by Amy Howden-Chapman, likewise works by evading the listener's direct attention. Issuing from the Night Gallery's endlessly mysterious side room, a man reads an imagistic text in a lulling monotone, beginning with the statement that he has been chosen for this task because his voice sounds the most like a lake, “not a piñata, but a lake.” One strains to maintain focus in the wake of its hypnotic tread, mainly experiencing the work as it inflects one's interactions with the other two. Drawing closer, however, I came to feel that the dissociative thread introduced by the assertion of a resemblance between a voice and a lake was central to the piece – as with the other work in The Womb-Womb Room, one is drawn in and pushed away all at once, an experience miming the alluring grotesqueness of the nightmares unfolding by the thousands in the night around me. I wasn't thinking of these, however, as I left and drove home, the streets empty at that hour, haunted by what I'd seen.