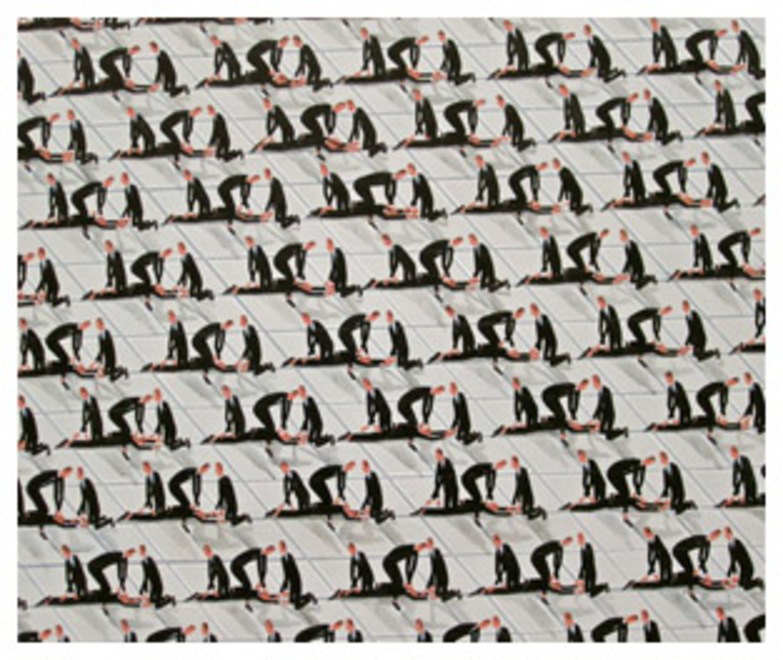 Taking the Corps Out of Corporation

I like Winkleman Gallery’s “Corporations Are People Too,” though I am wary of attempts to capitalize on the populist outrage unleashed by the Occupy protests this past fall. And there may be more pressing contemporary artworks that also address the increasingly queasy relationship between people and commerce. With those caveats out of the way, “Corporations” has some wonderful pieces and feels urgent. The springtime of 2012 may see the “change in conversation” around economic inequality (seemingly evidenced by this show) more burning and loud than simply a discussion.

The show feels like a two-for-one recession special, with a portion dedicated to five black-and-white photographs by documentarians such as Dorothea Lange, Lewis Hine, and Berenice Abbott, ranging from the Depression era to the 1970s. These vital ties to the history of radicalism, social critique, economic growth, and trade union organizing feel closer to the 21st century than they did a year ago.

Some of the contemporary pieces included here feel out of place because they document culture instead of upsetting it. Among these are Kota Ezawa’s lightboxes of Ikea catalog images and Jacqueline Hassink’s photographs of empty corporate boardrooms. Chris Dorland’s collages of overzealous models are creepy and exciting, but feel like throwbacks to 1980s punk zines.

Ian Davis’s spare and angular acrylic paintings are haunting and goofy. In Untitled (Muggers, 2011) groups of identical, suited men hold each other down forcibly in poses that suggest something between initiation rite and sacrifice. Innumerable quartets of those icon-like men repeat their stilted contortions over and over across a tiled plane. Davis’s Conversation (2011) shows a similar army of black-clad men facing an eerily empty dais, each man with an arm raised in stiff salutation.

Yevgeniy Fiks’s Lenin for Your Library? (2005) is enthralling. Having mailed copies of V.I. Lenin’s Imperialism, The Highest Stage of Capitalism to 100 companies, inviting them to add it to their corporate libraries, the bureaucratic responses Fiks received are funny and telling. Some, like Coca-Cola, claim that Imperialism has nothing to offer their employees. Apple signed its correspondence “Apple,” as if it were entirely faceless. It seems that the vast majority have not replied, have returned the text (Wendy’s sent a coupon along as well), or passed it off to another institution. Something of each company’s corporate identity and our relationship to it is here surreptitiously revealed, being the most succinct declamation the show makes. 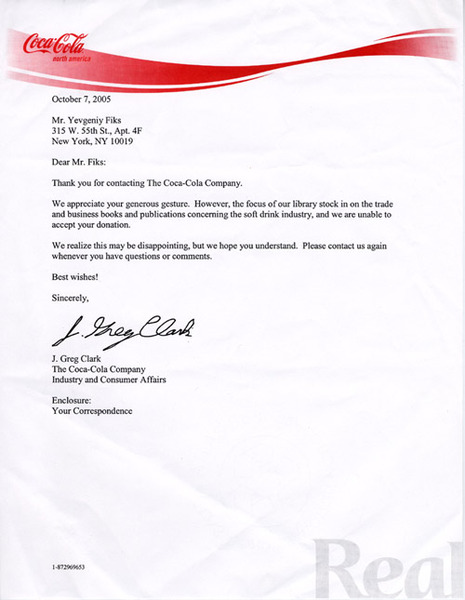 Under the Radar: Super Pop Boy | Leonard Zinovyev | Taco Eisma
1/10/19
COMMENTS (1)
Hi, old friend
Hi Noah, it's Christina. In New York doing what you love, eh? Hope you're doing well. I had a dream about you last night.... cc_doom@yahoo.com
Comment by: La Pozolera on Sunday 02/24/13 at 6:10 AM
ArtSlant has shutdown. The website is currently running in a view-only mode to allow archiving of the content.